Tonight could be our first frost/freeze

First, I forgot to mention in my Garden Bloggers' Bloom Day post, that Carol, from May Dreams Gardens, started this, and last I checked, there were 63 replies to her October GBBD post today, most of whom said they had pics as well.  I need to get to bed, and finish looking at them tomorrow.  What fun!  Thanks Carol!
DH was nice enough to help me pick peppers this afternoon in anticipation of our first frost or freeze tonight.  One forecast said it could get down to 31, another 35.  When he asked if he should pick them all, I told him to leave the small ones.  He doesn't always hear me, as he has some hearing loss.  It was too late, by the time I realized he hadn't heard me.  I explained that if it doesn't freeze, then the small ones could continue to grow.  I noticed he missed a large one, so maybe he missed some small ones, too.
Someone on the Cottage Garden Forum mentioned getting a job done she'd been putting off, in about an hour.  I replied that I had several things I need to do that won't take long, once I get to them.  Picking and freezing the peppers was one of them.  Of course, I didn't get them cut up to freeze tonight, because I was too busy on the computer.  Tomorrow, I hope to get that done!
I pulled out the two sweet potatoes that were sticking up out of the dirt.  The others I'll dig out after the leaves get zapped from the frost. 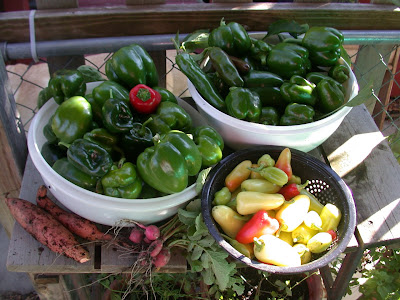