Edna, from the Cottage Garden Forum, asked about Giant White Moonflowers. I don't know if mine from last year are the Giant Whites, but they grew quite a lot, and seemed giant to us. I have forgotten how to post photos there, and am taking a quick break from my house cleaning, so I'm posting here so she can see a photo, as she asked if anyone had one.
This is from August 13, 2008. The moonflower vine is on the left, and tie dyed morning glories or their babies are on the right. This is the west side of the deck, so it gets full sun. There is just a small amount of soil exposed where it's planted between the deck and the sidewalk, so it doesn't dry out as much as it would if more of the ground was exposed to the sun. 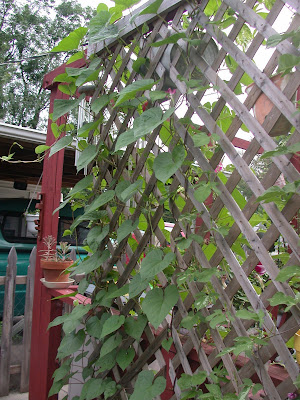 The next 2 photos were taken August 30th. Closer to the house is Sweet Autumn Clematis. The moonflower vine is as exuberant as the clematis, and even has come up between the wood slats on the deck. It's easy to cut back where you don't want it, though. 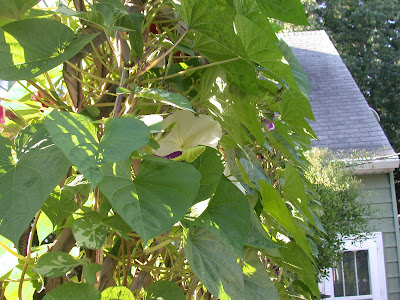 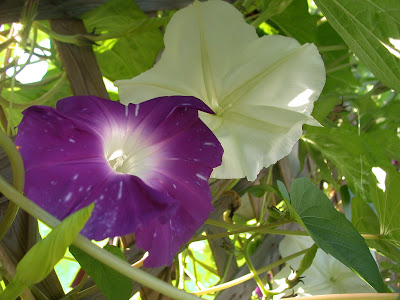 I didn't get any moonflowers planted this year, but hopefully, some of the little plants coming up are moonflowers. I'll know soon. It doesn't reseed as much as the morning glories, which are sending up seedlings to replace the ones I'm pulling out. I love growing them so much, though, that I'm willing to pull out the extras.
Posted by Corner Gardener Sue at Monday, June 22, 2009