Feeling a Bit Black and Blue 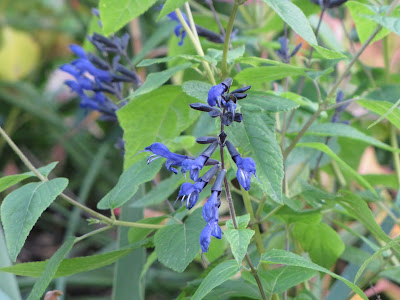 It has been 3 weeks since I tripped on Heidi's front yard leash while holding our grandson, who will be 2 in January. I managed to set him down on his side, and he bounced, hitting his face to the ground. Thankfully, he came out of it with no scrapes or bruises. The bruise on my knee is starting to fade, but it still hurts. I had an x-ray last week, so we knew there were no broken bones, but my P.A. said it was difficult for him to examine the knee because of the pain. When I showed him my ankle was swollen he said gravity had caused the bruising to go down there.
I called yesterday to let them know the swelling and discomfort in the ankle had gotten worse, and my knee is still hurting, although it is starting to get better. They had me come in today, and he was better able to examine the knee and the ankle. He told me the knee is sprained, and the ankle is strained.
He said I can still walk, but to rest if my knee or ankle is hurting. I am on my feet a lot at work, and each day, I come home and stay off of them most of the evening. I have taken a few yard walks and some photos, but the last few days, I haven't been out much. I had planned on moving a bunch of plants around, but that will have to wait until spring. I also wanted to move compost around and do some fall gardening. I have lettuce and potatoes waiting to be harvested. There are lots of green tomatoes to be picked before the weekend, when we are supposed to have freezing temperatures for the second time this week. I'll have to get Larry to help.
I was looking at photos from a year ago, thinking about posting some. There were lots of blooms and butterflies still, and even some monarchs from the 14th! (We have blooms, but some have wilted because of the frost the other morning, and the pots are dry because I haven't been out as much to water them.) Even though I saw monarchs every day this summer, I haven't seen any the last week or so. Maybe it's because I haven't been out there. I am not ready for winter, either, and don't like it that our weather is turning colder than normal already. But, when it's warm out, like today, I feel sorry for myself because my knee and ankle hurt.
I really shouldn't be having such a pity party. I will heal in time. There are so many people in worse condition than I am in. Next spring, I will really appreciate being able to do the outdoor work God has given me a love to do. In the meantime, I hope to catch up with lots of blogs.
Posted by Corner Gardener Sue at Wednesday, October 07, 2009