Why Do I Garden?

I have been mulling around this question, that was posed in blotanical.  I saw someone had posted about this, and saw that Stuart had posed the question, and you were supposed to limit it to a certain number of words.  I have avoided reading the posts until I could write mine, but then I think I read some in an effort to find the original question, but never did.  As it turns out, this is more of a history of me gardening, and I know it will go over the word limit.
I was not able to find all the photos I wanted to scan, but at this point, I just wanted to get it written. When I was a girl, I liked flowers.  The first two photos were taken at my grandparents. They had a huge vegetable and flower garden.  When they were first married and my dad was little, they worked the beet fields as migrant workers.
Here I am at 3 years old.

I remember my neighbors gardening when I was a girl.  My next door neighbor lady planted all kinds of things, but I was especially drawn to her raspberries.  She let us pick them from the alley.  I don't remember how old I was when I talked my dad into planting some raspberries, and I don't remember how long he let them grow before deciding they were too hard to mow around, and took them out.  I also remember planting iris and other flowers around our patio. I always planned to have a garden when I grew up and had my own space to do it.
The first apartment I lived in was a basement one with very low rent, and when I got married in 1972, we lived there a little while, then found a place where the landlords didn't live above us.
The next picture is of the house we moved into that was 2 apartments.  Ours was on the first floor.  The landlord let us take out the stuff that was growing on the right side of the house to garden.  Right next to that was a large row of lilacs that belonged to the next door neighbors.  There was a little more area to the rear, too.  I know we have pics of this area planted, but I couldn't find them.  I had lots of house plants, here, including a gardenia that bloomed.  We had awesome windows for plants here. 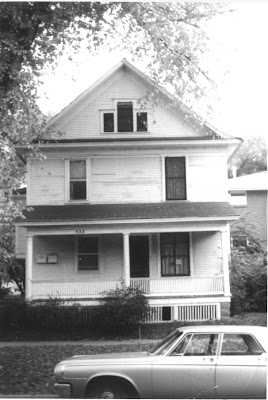 This is the parking strip, where I put a few more things in.  I was mostly interested in herbs and vegetables, but also wanted flowers as more of a side interest.  My dream was to move to an acreage and live off the land.  This area is now paved for parking.  (Oh, and that's Rufus, our sheep dog.) 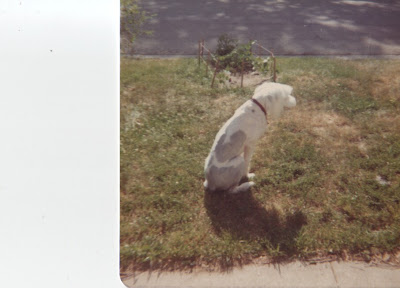 Now, this is out of order, because Rufus was a puppy here, and the bushes weren't taken out yet.  I don't remember what they were.  I was thinking it was just overgrown weeds, but that's not what it looks like here.  Larry was reminding me, though, that the landlord said he should be paying us for all the work we did in the yard, so I guess he wasn't fond of them, whatever they were!

After a few years, we moved to a place with a huge yard a block from Larry's parents, and had it all ready to garden the next year, but we ended up buying a house, so didn't get to enjoy that garden.  I didn't mind, because our first house was on three lots, and I had two huge vegetable gardens, plus, the previous owners had lots of flowers, such as iris and coral bells planted here and there.  There was a huge trumpet vine growing on a dog kennel, and several very nice trees.
I'm thinking this was taken in 1977, when I was pregnant with our son, our first child. 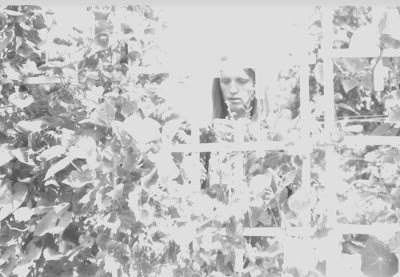 This must have been taken after he was born.  I remember the previous owners had purchased some worms, and they really liked my compost pile. 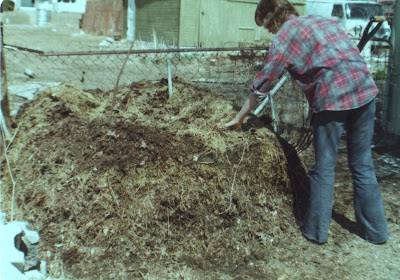 We moved from this house when our son was almost a year old.  I didn't find a decent picture of the gardens in our next house, either, but the gardens weren't as big.  After living there 18 years, we moved to the house Larry grew up in.
The next photo was taken by my neighbor after we'd lived here a few years.  It was before I joined Weight Watchers and lost weight, and before we put a raised bed in this herb area, and put a fence around it to keep our dog from jumping the fence into the neighbor's yard. 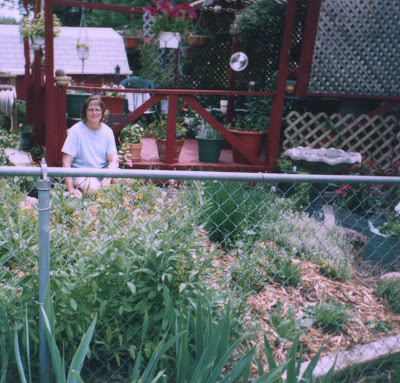 We've lived here 10 years, and, as I've said, I have talked him out of more and more grass over time.  I have had some pics of the whole yard exported to put in my sidebar, and hope to do that soon.
So, why do I garden?  I don't know, I just love it, and think God made me that way.
Posted by Corner Gardener Sue at Sunday, December 07, 2008

Labels: Why I Garden