I never used to pay much attention to the fire hydrant in our yard.  It was just there.  This photo was taken 5/3/08.  The circle bed in the front in the pic had mostly orange, red, and yellow flowers.  This is the bed that was expanded to make the big one with the black fence the first week of June.
Here's a close up of the fire hydrant from 5/20.
Two days later, what happened to the lovely chippy red?   Also, what happened to my crocosmia plant near the curb?  It looked like someone dug it right out, but I was glad a little baby plant was left.  I was so irritated because I share plants all the time, but to think someone would just help themselves was upsetting to me. 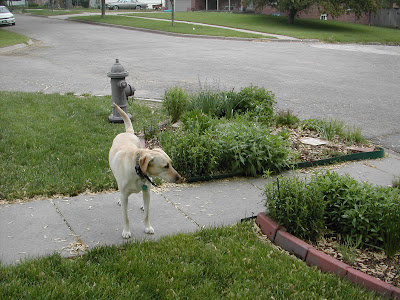 I just had a fit!  Ugly, ugly, ugly, was what I kept saying, and Larry kept saying how much he liked the color.  We would see more hydrants pop up with that color here and there, and whoever noticed first would proclaim their glee or gloom over them. 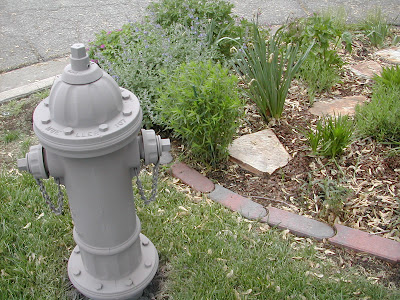 In early July,  I'm not sure what date, because it didn't get recorded with these pics, a crew of 3 guys came around while I was outside, parked right in front of my flower bed, and proceeded to tromp on my flowers and drag the paint hose over them.  I was friendly, and all excited when I told them I didn't realize that was primer they had put on it!   I sat on the front porch to watch the event.
When I saw a guy standing where the crocosmia had been, I then understood its fate, and that it wasn't growing in someone else's yard somewhere.  I went over and politely pointed out the baby plant, and asked him to stand on the stone path that was less than 6 inches from where he was standing.  I could tell he wasn't thrilled about my request, but he complied.  They also bent down my Johnson Blue geraniums by the curb, but didn't kill them.
We just tilled the area behind it, near the corner the first week of June, and it needs some more plants. Maybe I should get some reds in there. 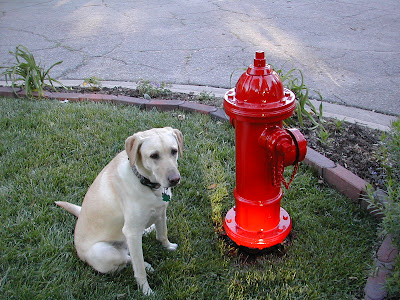 Heidi didn't seem to have an opinion on the paint color.  Larry was disappointed the other color was only primer, and they painted over it.  I liked it better the way it was before, chippy and faded, but have gotten used to it. 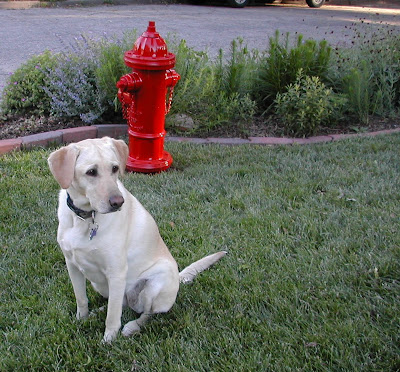 After the guys left, I called the city to say that I realize it's their property, and my flowers may have made it inconvenient for the painters, but they could have parked on the other side of the corner, or at least have been more careful to step on the obvious path that was right next to where the guy was stepping.  I told her the crocosmia story.  The woman agreed with me, and told me it was a private company, but she would let them know.  At first she was thinking I wanted compensation, and was going to get information from me to go forward with that, but I told her I just want them to be more respectful of living things, and not step on other peoples' flowers or drag their hoses on them.
And there you have it, the story of the painting of the fire hydrant, 2008!
Posted by Corner Gardener Sue at Sunday, December 21, 2008