My Experiences with Rosemary

I love growing and cooking with herbs.  I also like to grow ornamental herbs in my flower beds. The herbs I go to first when cooking seem to be rosemary, parsley, either flat or curly leaved, chives, and dill.  One of my favorite ways to cook chicken breasts or pork chops is to put a little olive oil in a pan, and brown them, then put a little water or flavored vinegar, like balsamic, and put the lid on to cook through.  When the meat is done,  put a little all fruit spread like raspberry or apricot on each side, or just in the pan, and any kind of mustard.  Scissor cut rosemary, and chives or thyme onto the meat.  Cook with the lid off, and it will make a glaze.  Turn the meat a couple times so it gets coated and doesn't burn.  More rosemary can be added when serving.
To scissor cut rosemary, move the leaves to one side as much as you can; holding them in place, take small cuts, ending as closely to the stem as you can, then you can pull along the stem to get the rest.
Kathy from Cold Climate Gardening had a very informative article on keeping rosemary alive over the winter, and I mentioned there, that I was going to tell about my experiences overwintering rosemary.  I'll do it in a series of photos.
These photos were taken October, 2007.  There is tarragon in the lower green pot, lemon balm or a  mint of some kind in the back pot, and in the white pot are chives, purple sage, and the rosemary that is probably my favorite, creeping, or prostrate. 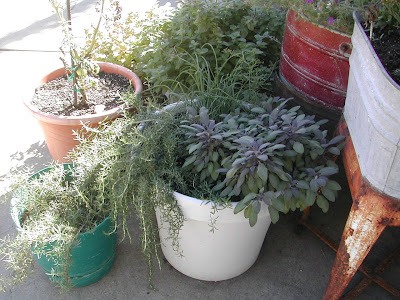 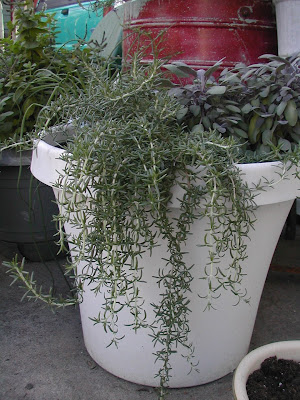 The rosemary layered itself, and bloomed, which I rarely see.  If you look closely, you can see the stem that took root.  I dug that out, and planted it, and it lived happily inside over the winter, and grew nicely this summer. 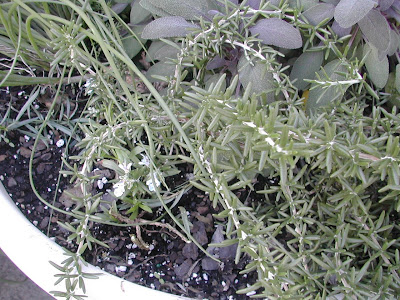 The next several photos were taken this evening.  This creeping rosemary, the plant dug from the mother plant is blooming.  This will be the second winter for the bay tree on the left.  We have had this east facing garden window two years. 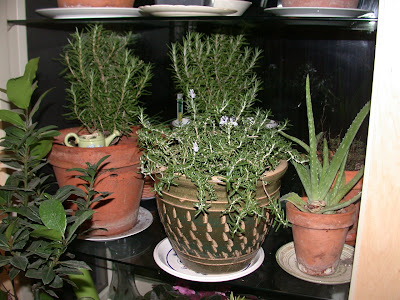 Over the years, I have not always had success with rosemary in the house over the winter.  My problem has been that I sometimes let too much time go by between watering.  I have found that once rosemary dries out, it doesn't recover easily.  A friend of mine suggested misting them with water in a spray bottle.  I don't always remember to do that, either, but do when I think of it.
I'm not sure what variety this rosemary is.  It had done OK most of last winter, but toward spring, I thought it had died.  I set it and another one outside the door, and my hubby, who likes to place the pots around the yard, put them out with the live ones.  Do you ever do things in your mind, but take a while to really do them?  Well, if I didn't have this habit, these would've been on the compost pile, and I wouldn't have seen these plants come back to life.  It makes me wonder if ones I've given up for dead in the past would've made a return to the living. 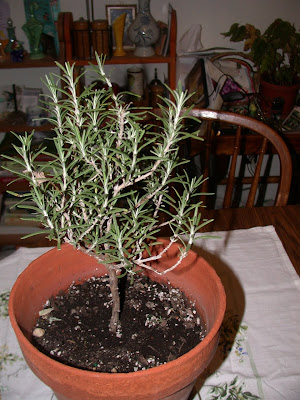 I'm pretty sure I planted this Arp Rosemary this spring. 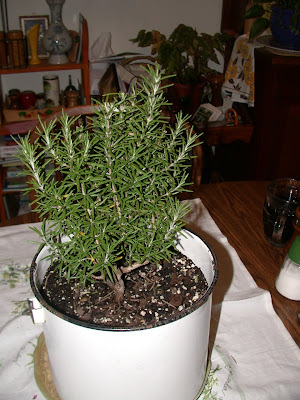 This is the other one that I thought had died last winter.  It's not pretty, but it still tastes fine to cook with. 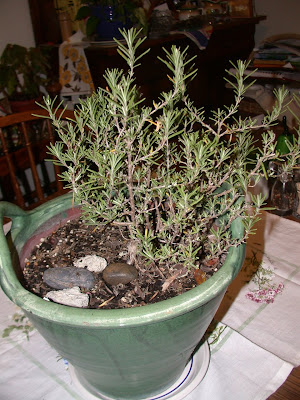 This one is Rosmarinus Officinalis 'Alba'.  It survived the winter in the garden window last year.  The summer outside did it some good, too. 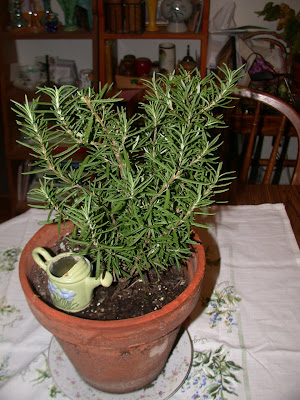 Here they are, tucked in with a scented geranium, some kind of citrus plant I won, an aloe vera, and some African violets, ready for the winter. 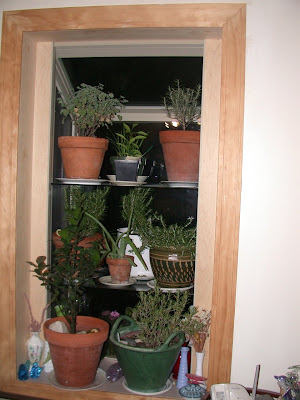 This is Madeline Hill rosemary, and it is supposed to be able to survive outside in our zone 5b.  I need to remember to mulch it when the ground freezes. 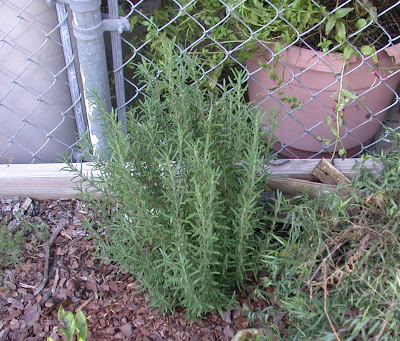 I forgot to include a picture of the pine scented rosemary that is growing in a tub outside, that I didn't get dug out.  It is good to cook with, too, but has a little different flavor than other kinds of rosemary.  I think I'll cut it down and dry the leaves.
I seem to have a collection of lavenders, too, and when I get the time, I'll put pictures of them here.  I will be putting them in the egress window when the temps get colder.
Posted by Corner Gardener Sue at Saturday, November 01, 2008