Kale, It's going to be a Three Parter

Our 10 month old grandson has been over today, as usual, but he has a bug of some kind, and now his parents are sick with it, so he is going to spend the night here for the first time.  I didn't get the kale cooked today, but it will still be fine to use tomorrow.
I got to thinking, though, that I didn't remember when I planted the kale.  I decided to look for a photo of when the kale plants were seedlings.  I found pics of lettuce and other plants as seedlings, but not the kale.  The potatoes on the left were planted in March, as were the lettuce, I think.  I do successive plantings, starting sometimes as early as February.  Our spring was late in getting here, but I think I at least started some in March.  The buttercrunch and other leaf lettuce looks like it needed thinning here.  We start eating lettuce and other spring greens as soon as I start thinning, which is when they are quite small, so at this point, we were eating lettuce every day, and not keeping up.
The kale here, on 6/3, is quite small still, growing at an angle in the photo between some lettuce, starting at the cement block.  I'm thinking maybe I got the seeds later and planted them in April or May, not March, as I said in Kale...Pt. 1.  I am also thinking the kale was slow in coming up.  I should remember when I plant things next year, assuming I'm still blogging.  :o)  I'm not normally a good record keeper. 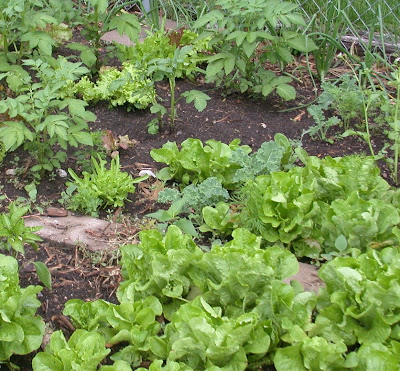 The next photo was taken 7/5.  How could I  have forgotten about my battle with the bunnies?  I learned to tell their bite marks, by the jagged edge they leave.  They also took their share of lettuce, as usual, especially romaine.  Shortly after this was taken, I cut the plants way back to the stubs, and sprayed Liquid Fence around the area.  I ate the kale, feeling quite smug, and I don't remember if the rabbits came back when it regrew or not. 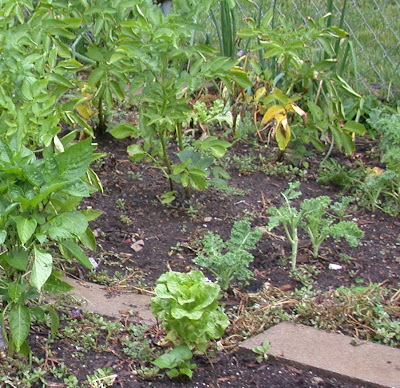 Look how nicely the kale rebounded!  This is from 8/13, and the potato plants were dying back already.  You can see stick verbena, which the butterflies frequent all over the yard, and there are some pepper plants in the photo. 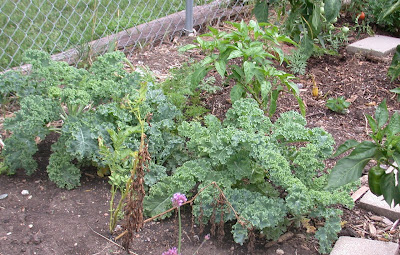 This, taken 9/25, looks like it's showing where I've picked some of the leaves.  It doesn't look like I picked the center ones.  Maybe I just removed them because they had gotten big or had insect damage on them.  I just noticed the neighbors' fence to the lower right, which means I took the picture from their yard. 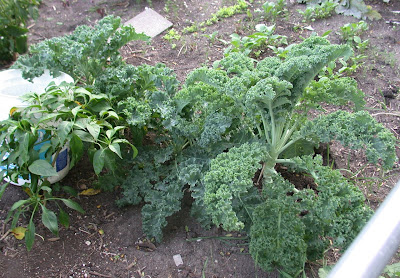