I left off the story of my new bed on June 8th.  Around this time, I found the Cottage Garden Forum on ivillage. There were several people there, including Cameron, from Defining Your Home Garden, and Nell, from Secrets of a Seed Scatterer who encouraged others to start blogs. I finally gave it a try in October, and am currently near my 100th post. As time went by, other people also started blogs, and there were several threads on the topic.  One of them, "Do you blog your gardening?"  includes bloggers' links, some of whom you may already know.
I planted several kinds of foxglove, and enjoyed their blooms.  I am hoping most of them have survived the fluctuating temps of this winter.  This pic was taken 6/15.  I think it's a strawberry one. 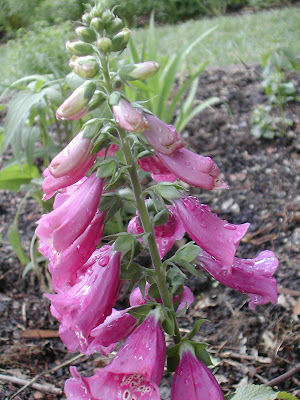 This Vancouver dahlia was a splurge, and it bloomed the whole summer. 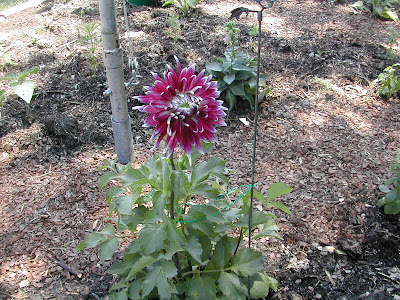 By 6/15, I had given away the amsonia I had put in the corner, and replaced it with a crocosmia. The blue flowered plant is a small type of delphinium, I think, blue butterfly. I placed pots and watering cans around to fill in some of the spaces. 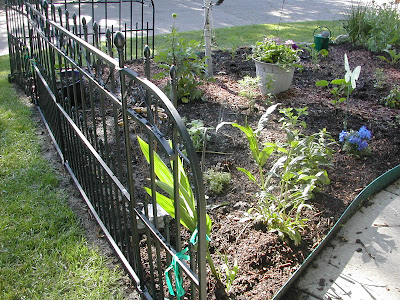 I was planting things in this bed all summer, and putting pics up in the Cottage Garden Forum, getting lots of encouragement that it would fill out.  This was taken 6/18. 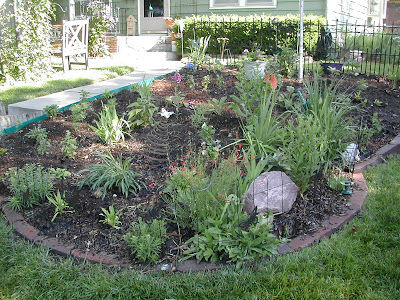 This plant, a perennial bachelor button, was part of the circle bed. The gold balls will look like the yellow one when they are in full bloom.  This was taken 6/25.

I can't remember the name of this clematis, but it was planted around 6/30, and I cut the flowers off after taking their pics so the plant would root well.  It didn't start growing until close to the end of the season.

This pic is from 7/6. The helenium, red hot pokers, and pine leaf penstemon were part of the circle bed.

On 7/6, the moonflower I had moved from my veggie garden is growing, as are the sunflower seedlings near the fence.  The cardinal creeper in the blue pot is starting to grow on the fence, and I found a couple cypress vine seedlings that I moved to the ground on each end of the fence.

I don't remember if I mentioned that Larry had asked me if I could think of something to put near the curb next to one of my other curb beds, since the weeds were taking over the grass. Do you think I said I'd have to think about it?  Nooo!  It didn't fill out as much as I wanted, so I'll be putting more plants in there in the spring. Here it is 7/7, next to the lovely red fire hydrant. I should probably find some red blooming flowers to put there. 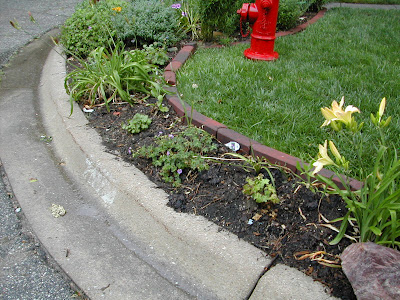