I neglected to take a picture of the messy room upstairs that I had agreed to get organized last winter in order to get Larry to agree to help create a larger flower bed in the front yard.  I told him it would show that I can keep up with a larger bed and the house, too.  Well, spring came, and the room did not get finished, and I told Larry that even though I hadn't done what I said I was going to do, I really, really wanted to have a larger area to plant some large growing annuals.  One of the reasons he was dragging his feet was because he doesn't like the look of flower beds in winter.  When he saw how determined I was, and agreed with me that he's never been sorry when we created another bed, he relented.
This first photo was taken 5/3.  I may have had this pic in my fire hydrant post. 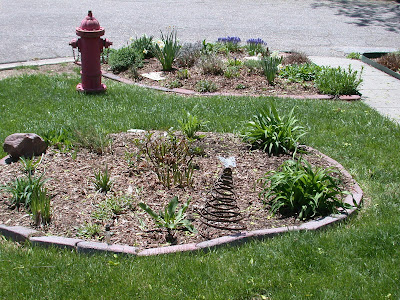 This pic was taken 5/28. This amsonia was planted the same day as one in the east bed in case one of them didn't make it, and both did.  Speaking of that, in each of my flower beds, is at least one kind of flower that is also in at least one other bed.  Not all flowers are in more than one bed, though.

Spring weather arrived late, and then, it rained a lot, so we didn't get the work stared as soon as I wanted to.  While waiting, I read part of the book, Lasagna Gardening, but when I saw that it was a long process best started in the fall, I wished we had known for sure that we were going to do this, and done it then.
Larry knew someone who wanted to go in with us to rent a sod cutter, so we chose to do that rather than the lasagna method.  We had not had any experience with one before.  It turned out to be awkward and difficult to use.  Plus the slope of our yard, and frequency of needing to turn around added to the difficulty.  (She ended up changing her mind and not having her sod cut after all when she saw how much Larry was struggling.)
Here are a couple pictures from 6/1, as we were getting ready to work. 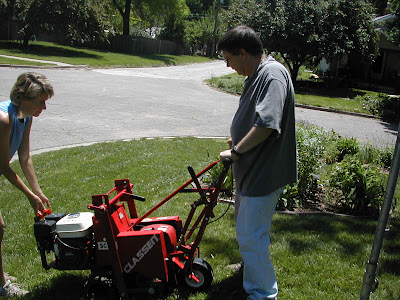 Hey, what color is that fire hydrant?

I helped roll the sod, and we did not consider how heavy those rolls were going to be.  That was hard work! 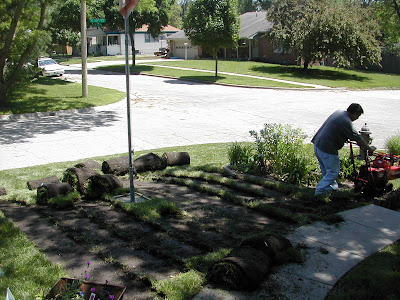 I asked several neighbors if they wanted the sod, and a couple did, but didn't have a way or the time to come get it.  Larry was done in, and did not have the strength to move the sod.  Another neighbor, a state patrolman who used to work for a sod farm was going for a walk while I was out working. When I asked him if he wanted it, he went right to work.  He put it in his truck, "Bessie" and went home to put it in the area he had recently taken the zoysia grass out of.  He also took the clumps of sod I dug out by hand, but decided not to stick around for me to finish the ones still in the next photo, also from 6/1. 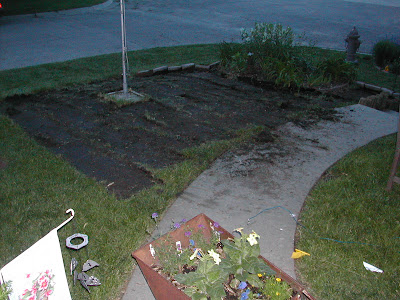 It rained the night after the sod was cut, and off and on for a few days, so we weren't able to work the land right away.  On 6/3, you can see the blue tarps I kept putting on the area whenever it rained.  I didn't think to use them the first night, so it took awhile for the soil to dry enough to work. 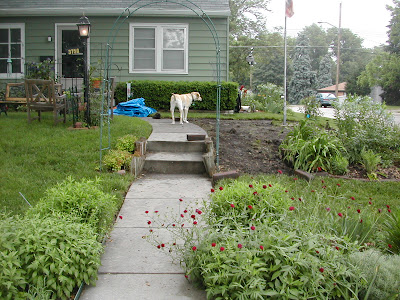 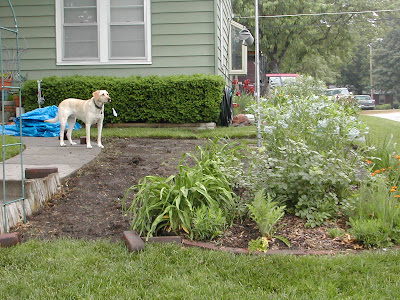 6/3, closer still.  I love those pretty blue flowers on that amsonia!  I like the orange hawkweed, too, and keep it from spreading too far. 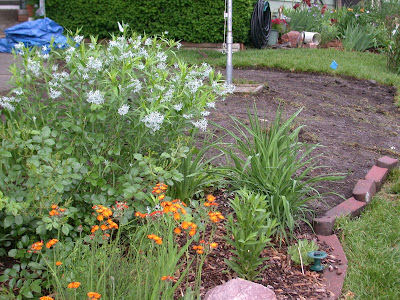 On 6/4, it's raining again.  Well, I guess it's good for the rest of the flowers.  This pic was taken from the side yard, near the east edge of the house.  The butterfly bush in the foreground is a purple bloomer, and the butterflies and bees love it.

Finally, on 6/7, Larry used our Mantis tiller, and incorporated Canadian peat moss, which is the kind they replenish, compost from our pile, and some bags of manure, which some say aren't that great to use, but I didn't have access to the real stuff at the time, and wanted to have more organic matter there.  We won't need to till again now that it has been loosened, and good organic matter added to it.  It got dark before I was finished planting for the day, and I just had to take some pics anyway.

I took more pics 6/8.  We looked at different kinds of fence, but decided on this easy to put up ourself one, which came in sections.  I liked some others better, but was more into instant gratification.  I cut back the amsonia, which was finished blooming, and planted it in the corner. I later dug it out and gave it away, because I decided it would get too big for the area. 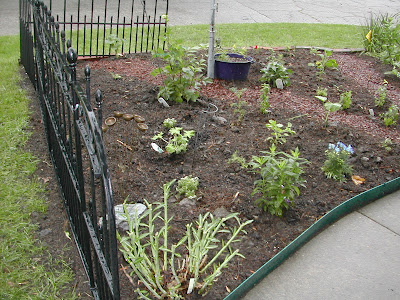 The celosias in the front didn't grow as tall as I thought they would, and I found other plants I wanted to put there, so I dug them out and put them in pots. 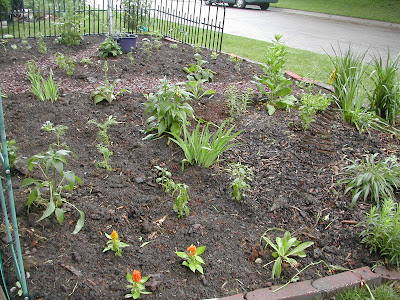 I put way too many pics in the file on this bed throughout the season, so I have split them into more than one post, and still have lots, and ended up writing way more than I had planned. Maybe next time I won't be as wordy, but I am not able to make any promises.
Posted by Corner Gardener Sue at Wednesday, January 21, 2009