Amsonias Part 3, The first was not my true love.

In December, I wrote about love found in an alley and then love part 2.  Today I am posting about the first Amsonia tabernaemontana I found locally after falling in love with the one in the alley.  When it bloomed, the flowers were slightly different, and I realized it was not the same kind as my first love.  It was OK, but over time, I realized it's a bit spready, and flops over, so needs more support.  It's not as tall, either.
This photo was taken 5/6/08, and shows the amsonia coming up on the east side of the house, next to the window well, under and next to the barbed wire.  On the left is a yellow blooming helenium, or Helen's flower.
This one, taken 5/12, shows the quaking grass next to the amsonia.  There is also a clump of amsonia that has spread in and next to the goldenrod in front of the bed frame. 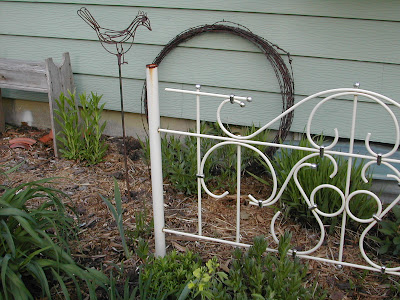 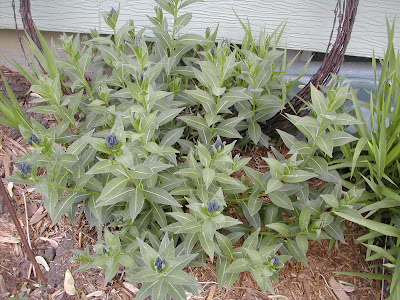 The one that spread to the area in front of the bed frame, 6/3: 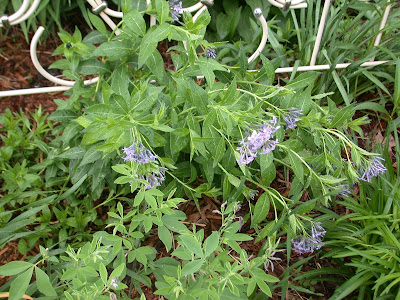 Another, next to the yarrow, has joined in the blooming, 6/15, making 3 clumps in flower: 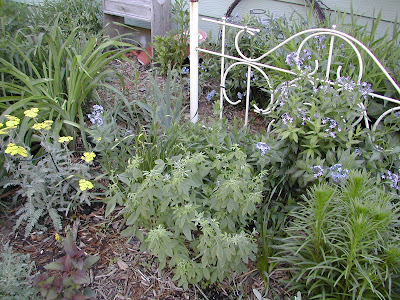 I'm not sure why I included this one, but the amsonia is still there against the house 6/18:

In late June, I was asked to have my yard toured by my local herb society, because the woman whose yard was to be toured broke her hip.  I would have rather waited until next year, but agreed, because another member who lives near me agreed to have hers toured, too.  In my preparation, I decided to dig out some of the flopping amsonia and pull up some that was out of bounds. The next photo was taken 7/10.  There is still a clump right against the house.  I don't remember what kind of cone flower I planted.  The yellow/orange flower is a crocosmia. 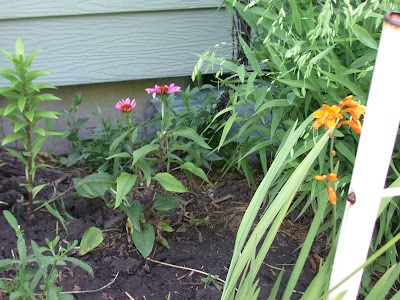 On 8/4, it's still right against the house, not spreading.  The newly planted foxgloves and fancy daisy I can't remember the name of are blooming. 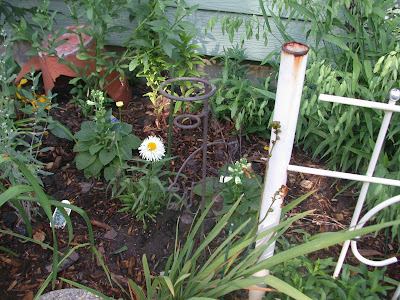 I didn't seem to have more pics of this amsonia until 12/26.  When I first started to work on this post the other day, I thought I had mislabeled the next pic, and that it was the one by the egress window, so I waited until I could take another pic.  I should have known better than that, because the leaves are shaped a little differently, and the other does not lie down like this one. 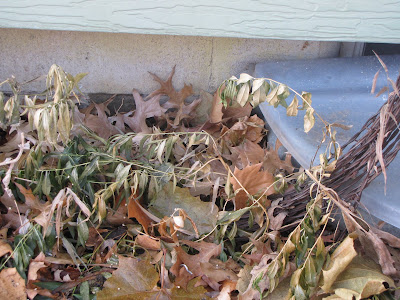 I decided to go ahead and include the pic I went out in the cold and snow after work today to take, which is when I realized I had not mislabeled the other pic like I thought I had. 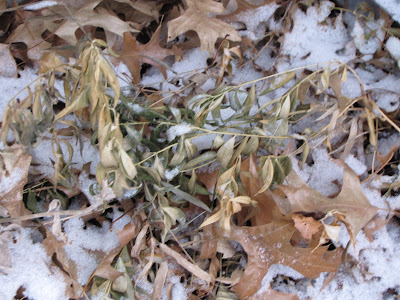 I am thankful the days are getting longer now.  Spring is getting closer.  This blogging has become my winter gardening, and I get to visit other gardens in the process.  Fun, fun, fun!
Posted by Corner Gardener Sue at Monday, January 12, 2009