More Harvest and Some Critter Damage

After posting yesterday, I got to looking at my orange oxheart tomatoes, and realized they were probably ripe. As I was looking, a wren on the fence next to the plant briefly chirped at me, then flew off. As I reached down, I noticed that these had been eaten too. I don't know if that's from birds, but whatever it was, I cut the damage off and sliced the rest to put on a bread crust pizza. I don't mind sharing with critters, but when they eat all the first to ripen tomatoes, it is irritating.
In the photo are 3 pretty tomatoes my next door neighbor gave me from her garden when I went out to check on the orange ones, and the non-blemished cucumber I was pleased to pick. 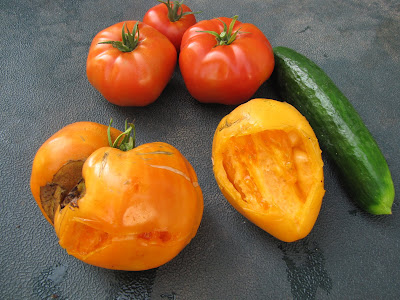 This morning, I went ahead and picked one of these tomatoes, but wanted to give the other 2 a little more time. Maybe I'll pick them this evening. In the background, the orange blooming Mexican sunflowers are getting quite tall.
(I went out after supper to pick the other 2 tomatoes, and they both had bites out of them. Grr! I guess I'm going to have to pick the rest before they are ripe. I picked a nice handful of the grape, and other small tomatoes from my 4 volunteer plants. You'd think the birds would eat some of those, where there wouldn't be so much waste.) 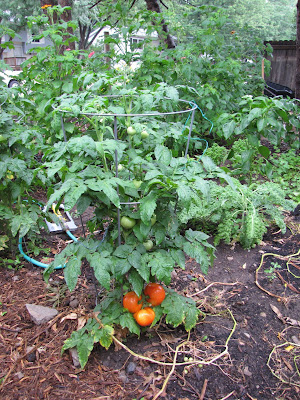 It rained last night, and this summer squash grew a few inches from the size it was yesterday. 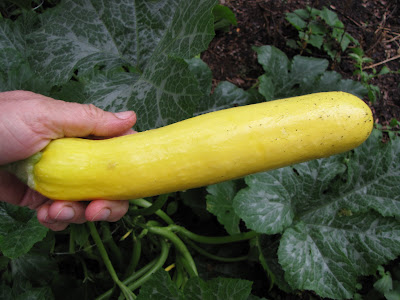 The winter squash is doing well, and I enjoyed seeing 2 bees in the blossom. 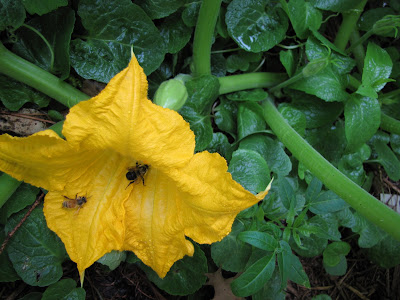 Well, my lunch break is over, and I'm going back upstairs determined to get a room uncluttered so it's usable.
Posted by Corner Gardener Sue at Tuesday, August 04, 2009