July 2008 in my Vegetable Garden

It is currently 14 degrees fahrenheit, and the snow from Friday night is not melted yet. The highs for the week are supposed to be a bit warmer each day, and by Thursday, it is supposed to get up to 66. The snow should be melted by then, until the next time it comes down. I have been enjoying visiting as many of your blogs as I can, and staying up too late in the process sometimes. When spring gets here, something is going to have to give. I know there are others feeling like this, too. There are so many great blogs and bloggers, that it's hard to keep up.
I am invited to go to a friend's house today to join her and some of her friends in looking at seed catalogs. When I told her I buy my seeds locally, but could bring my computer and we could look at some online catalogs, she said that would be fine. So, just in case I get to show anyone my blog, I wanted to go ahead and get July's veggie garden post up. (When I exported the pics, I added 500 to the normal 1000 pixels, but it doesn't look like it caused these to be as clear as they are in iphoto.)
At the end of my June post, I said I would show the perennial sweet pea vine. This pic was taken July 5th. The white building is our garage.
July 5th, the self sown larkspur and hollyhocks were in full bloom, and I had been picking some of the onions to cook with, giving the others more room to grow.

The tomatoes were starting to form, and the self sown bachelor buttons were blooming. 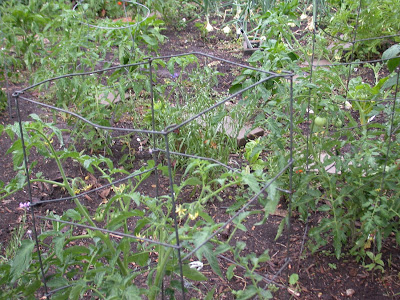 This pic of the sweet potatoes I grew in the tub on the driveway side of the garden was taken July 6th. The lattice fence to the right of the bed frame is a couple feet to the north, creating the entrance to the garden.

The next 6 pics were taken July 7th. This is what's on the other side to the right of what was pictured above. Here were self sown larkspur, 4 o' clocks, a clematis that was distressed, and a pot of phlox and pansies.

I am always so busy, that I don't always make good use of the rhubarb, pictured on the back left. I just discovered a couple years ago, that garlic scapes, which are the seed heads on the garlic, are edible, and delicious. They should be picked before they uncurl, so I was a bit late with these, but ate them anyway. This hard neck garlic is on the left, in front of the rhubarb. I talked Larry out of throwing the green chair away, because it is broken, and have enjoyed having it in the compost area.

I don't remember what kind of eggplant I put in, but it didn't do well after the first harvest. The peas to the right were almost finished. There is a globe thistle plant in the upper right corner that I put there to harvest the flowers for drying. That's Swiss chard in the middle, and some marigolds I got from a person on Freecycle near the tomato plant. I haven't kept up with Freecycle, and need to clean out the mailbox I have that in, because there are probably a thousand messages I keep forgetting to check. I also gave away some perennials to someone on Freecycle last year.

This is a self sown moonflower in the pot, and some violets near the bench. 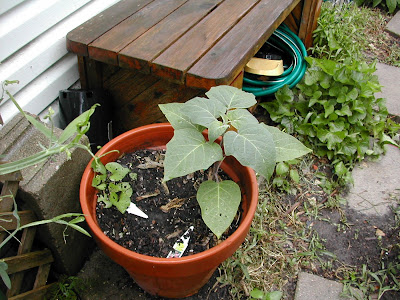 I battled purslane all summer, but concentrated on keeping in out of the onions. I didn't cook it, but munched on some, and let some come in with the salad fixings. 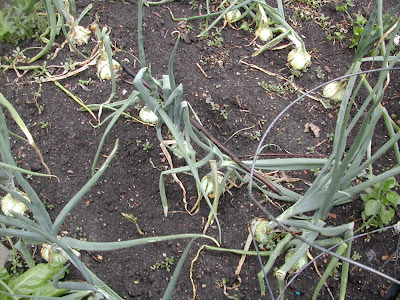 The sunflowers I moved from the front bed are growing near the larkspur, which dies out after it's finished blooming.

This pic, taken the 14th, shows the growth of the sunflowers, and the hollyhocks and larkspur still blooming. There are green tomatoes on the plant to the right.

This pic, taken the 19th, and shows the garden from the street. The swamp milkweed, white liatris, and day lilies, have added their blooms. 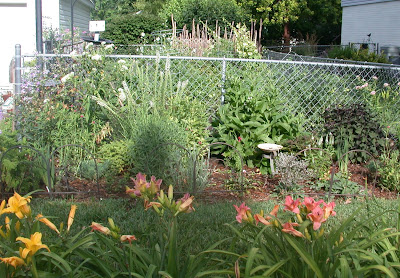 The sunflowers were even larger by the 16th, which seems to be the last day in July I took pics in the veggie garden. There's another sweet pea growing on a plant stand. 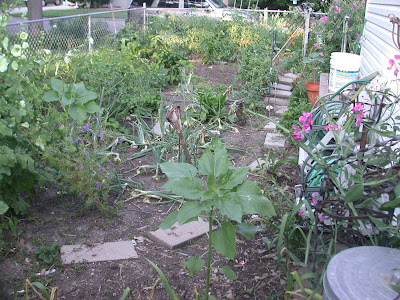 Some years I mulch, but there is always something I don't like about what I mulch with. This year, I applied compost a few times throughout the season. If you have a mulch you like for your veggie garden, please share it in a comment. Thanks!
I have the news on, and it sounds like some of you who don't normally get snow are getting quite a bit, and those farther east are expecting even more. Stay safe everyone!
Update: I enjoyed spending time with 6 other women today. We visited, and ate and ate, and then some had to leave when the rest of us got out the seed catalogs. We didn't decide on anything to order together, but had great fun looking at plants and garden accessories and gabbing some more. I was able to show them my blog and a few other blogs. They were quite impressed, but not enough to want to spend their time that way. LOL
Posted by Corner Gardener Sue at Sunday, March 01, 2009