I've already shared here how I started blogging in October after friends on the Cottage Garden Forum on ivillage talked about it and gave us links to their blogs.  One of the reasons I was attracted to it was because I could post as many pictures of the new bed, which was what led me to the garden forum, as I wanted, because the space was "mine."  I've also made references to blotanical, and have the icon in my sidebar, with a note, but I've never done a blog about blotanical, which is run by Stuart Robinson, who lives in Western Australia, and has a blog called, "Gardening Tips 'n' Ideas".
I don't remember when I discovered blotanical, but joined November 11.  It quickly became a part of my daily blogging routine.  I have had lots of fun exploring, finding out all the things you can do, such as looking at which garden blogs have been visited most, or which bloggers have been the most active on the site in the last 24 hours.  You can send and receive messages, "fave" blogs you like, read posts people have written, and "pick" as many as you like. Many of these activities earn you points for different "perks" on the site.
There are two reasons I'm writing this today.  One is because I clicked on someone's star by their name, and saw the stars are for "friends" who have written a post about blotanical.  The other reason is because, for the first time, last night, I was first on the list of most active "blotanists" in the last 24 hours.  Cool!  Of course, when I looked this morning, I was number 5.  That's OK, I'm just glad Stuart was able to get the site back up after some technical difficulties.  I want to provide links to blotanical posts a couple other people whose blogs I follow wrote.  One is Jill's from "Through the Looking Glass" and Grace's, from "Grace Peterson".  Click on their blog names to get to them.  If you are new to blogging, and don't know, you can click on "home" on their sites and see other posts they have written and great pics they have posted. 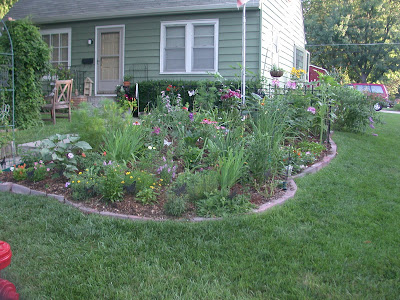 I need to get to work, so I may come back later and edit this like I frequently do, but have a great day! (I did do that.  It says the same thing, but I did more changing of the wording than I've ever done on a post.  In the future, I won't try to post something before work, when I know I don't have time to edit it.  It's still not a great piece of writing, but it's a post about blotanical, where you can find gardens and gardeners from all over the world.)
As I was driving to work, I realized I forgot to mention that the garden blogging community is a living thing, just like our gardens, and many members of this community know each other because of blotanical.  Thanks Stuart!
Posted by Corner Gardener Sue at Friday, March 06, 2009