June 2008 in the Vegetable Garden

It snowed several inches again last night. I imagine the crocuses that were blooming are finished, but the moisture will be good for the plants. I have had a fun day with our grandson, and was able to get this post together while he played next to me, and during some time with Grandpa.
By June 3, we were continuing to eat lettuce every day, but it was getting large, and I was still behind in picking it. The lamb's ears were still there, as well as bachelor buttons, what I think were a couple rose campions in the front, middle of the pic, a couple small tomato plants on the left, and an assortment of weeds.
From the front, the Husker Red penstemon, comfrey, either limonium or German statice, and a veronica were blooming June 3. 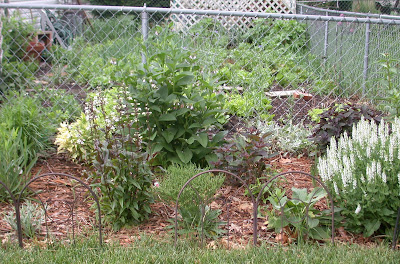 I'm not sure how long I let the lettuce grow in the onions, but I harvested it in time for them to keep growing. I worked to keep the weeds out because onions won't form well with competition or crowding. This was taken the 3rd, also.

On June 15, the hollyhocks were about to bloom. The potatoes were crowding out the lettuce I had put in their space before they came up.

June 15th must have been the day Larry decorated the compost fence with the "walking sticks" he had brought home from an area lake. 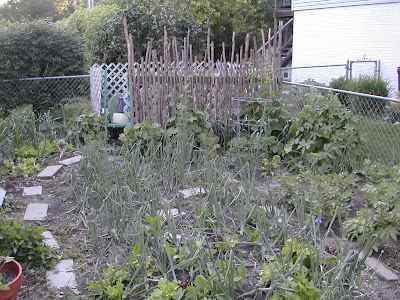 I guess I was proud of the potatoes, since I have two pics of them from the 15th. 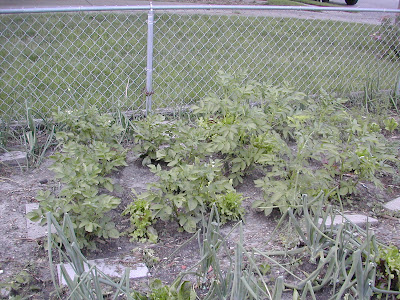 The post from July will have a pic showing where the sweet peas are in the garden. 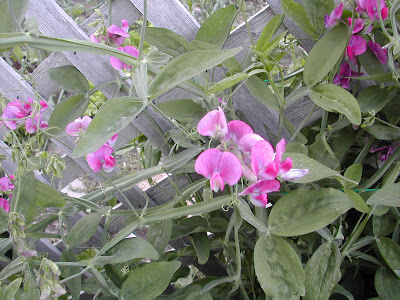 June 18th was the last time in June I took pics in the veggie garden. The onions were forming. 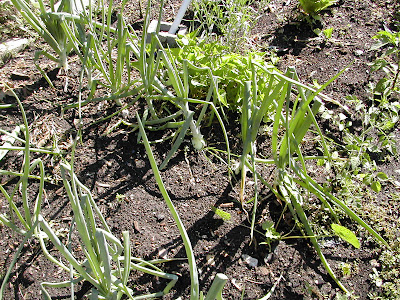 The hollyhocks and larkspur were beginning to bloom next to a tomato plant.

Cucumbers were coming up, with Four O' Clocks visiting from the other side of the fence.