Almost all of the fixes in the kitchen are done.  The contractor came over today to see how everything turned out and to see what further things need to be corrected.  The electric inspector said things were fine on that end, and someone from the the county assessor's office came to the neighborhood to find out what updates people had done on their homes in the last year.  I was confused at first, because I thought he was one of the inspectors.
At one point, I was pleased with how the grid wall turned out, but as I found more boxes of things, I kept adding more and more to it.  My family agrees with me that I have put too much stuff out, but say that the kitchen is me.  That makes me feel good, I think.  I have still been putting things away in the cupboards, then moving them to other spots.  I'm getting close to figuring out where I want things, though.

The people I ordered the grid and supplies for it were awesome.  After I couldn't find any close by, I found what I was looking for at KC Store Fixtures online.  After putting in an online order, I got a message saying there was no shipping available to my area, and to call them at the store.  I did so the next day, and was told by Dianna, the shipping for the 4 by 4 foot unit I wanted would be too much, and would I be willing to get 2, 2 by 4 foot ones?  She said she'd give me the brackets to hold them together and 2 more wall brackets.  The coolest part was that I had been able to leave a message when I wasn't able to get the order completed.  I mentioned that I had a photo on my blog of someone else's grid wall in a kitchen that made me want to get one.  When Dianna was asking me if I'd take the smaller pieces, she said she'd looked at the picture on my blog and thought that it would work to use the 2 pieces.  I was so tickled that she had looked at my blog.  Then I was amazed that I got the package the day after I ordered it!  I told her I'd post photos of my grid wall when I got it installed. 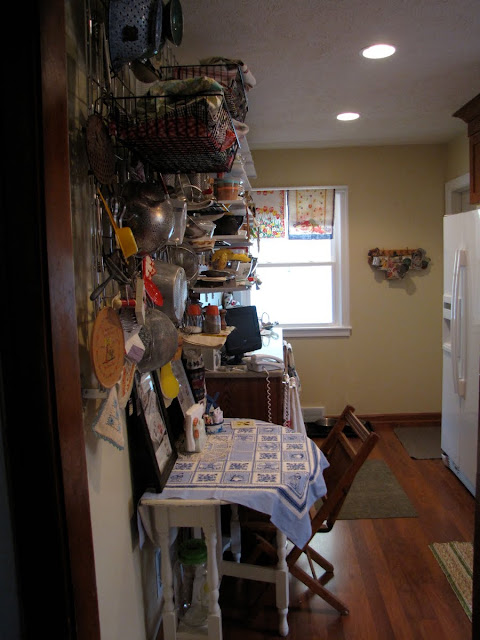 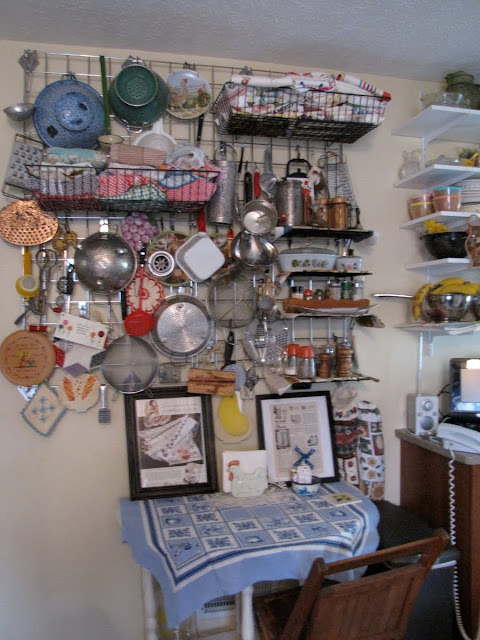 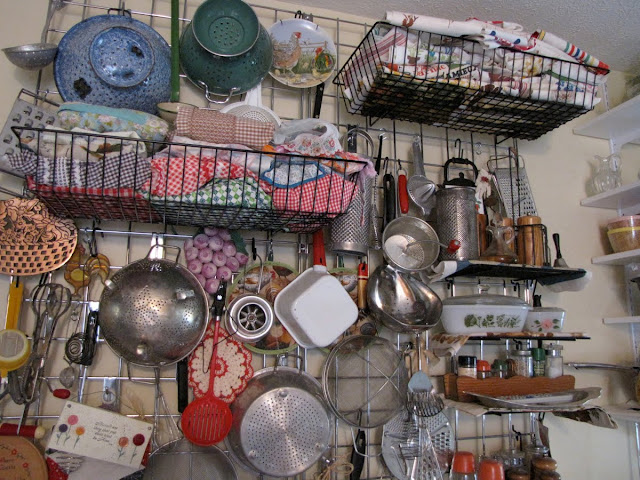 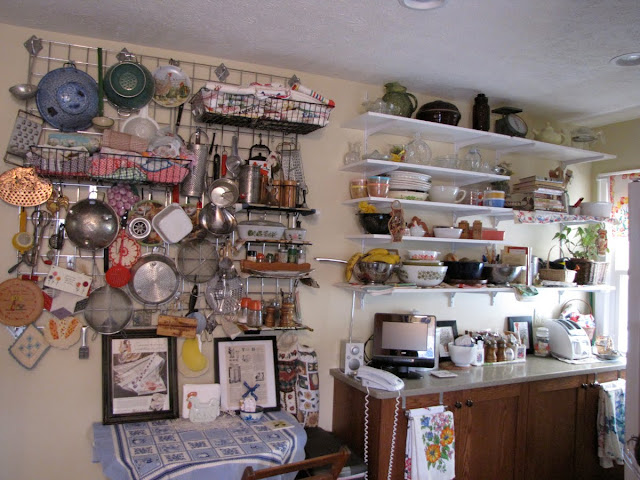 We're going to put a picture up on the wall next to the window. I plan to use these open shelves for onions, potatoes and other veggies, like tomatoes, that don't need to be refrigerated.  I do have some potatoes in some of the colanders. 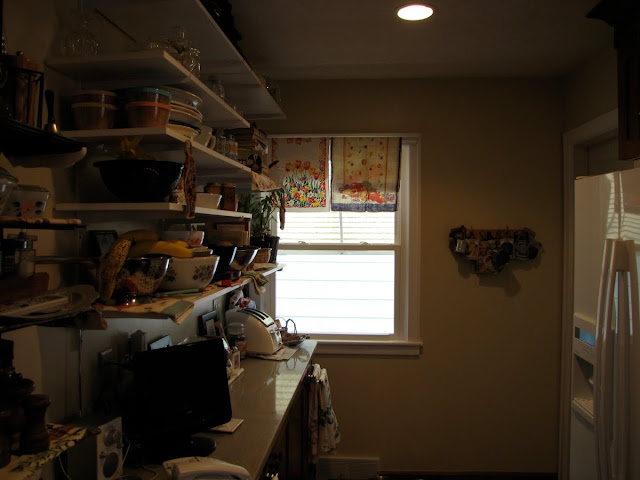 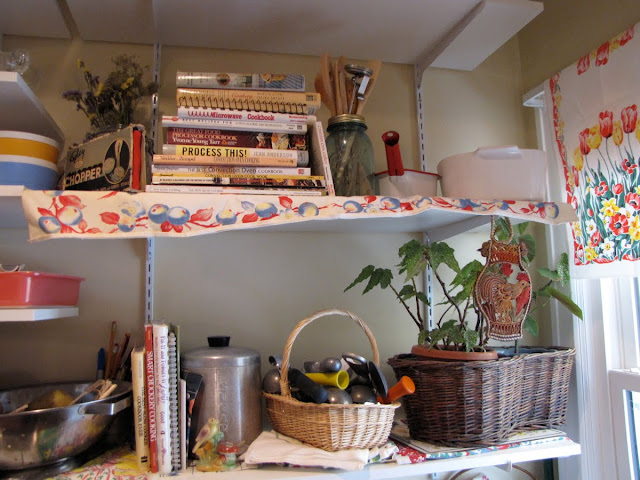 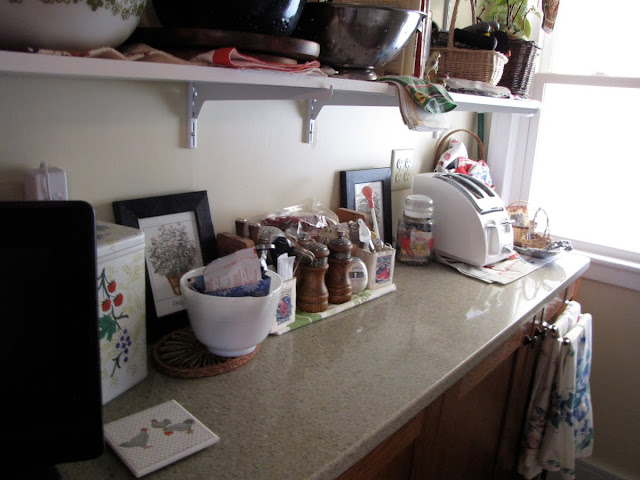 I love the quartz counters, and am glad we used a different color on the south wall.  I think I mentioned they are going to have to replace part of the counter by the sink.  Today, I noticed some light spots on this one.  I couldn't find much information about it on the internet, but did come across a kitchen forum from 2008 where people were discussing pooling of colors.  I think this may be what they were talking about, but the contractor said that's just part of the coloring.  Larry said it doesn't bother him.  I don't mind as long as the life of the counter isn't affected. 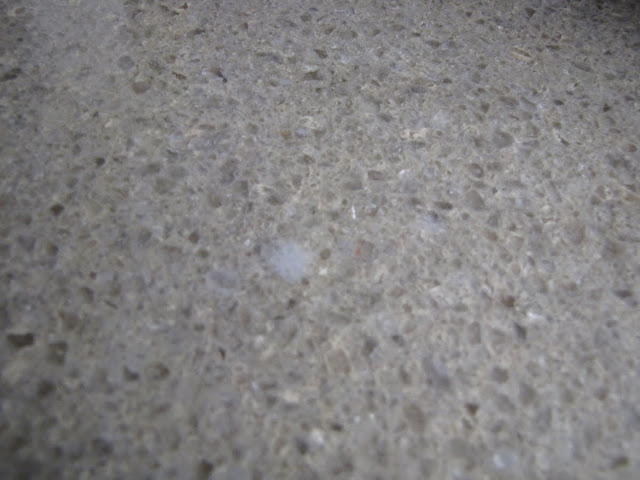 I used some of my magnets to put a few things on the refrigerator, but the front is smooth and pretty, and I haven't felt like I should put anything on it.  There is a deep scratch on each door,  The store came to see them today, and said they'd contact Whirlpool for us to get it taken care of. 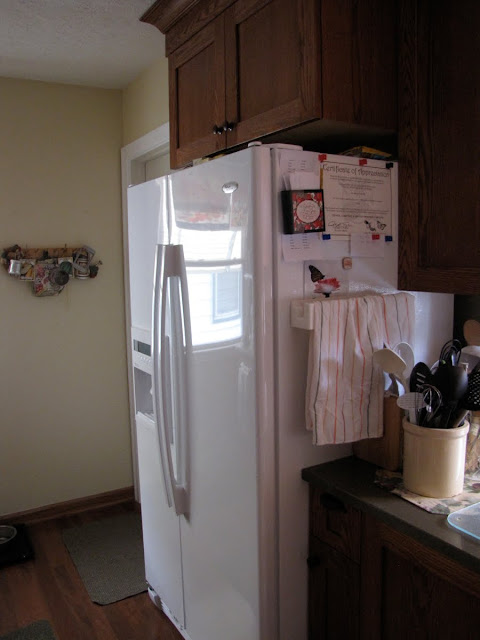 If you haven't seen the before photos, and want to see them, click here or on the "kitchen" label in the sidebar.  Most of the before photos are in the last 2, and you have to click on the "older posts" in that section.
As I was putting things away, I put what I didn't know what to do with in boxes.  Today, I went through most of those boxes.  Some things, I put in a "donate" box, and others, in containers to be stored downstairs.  I hope to get it all done in the next couple days so I can garden Friday.  It's supposed to get up to 60ish that day.
Thanks for all the encouraging comments.  I hope to be back in action soon.

Wednesday:  I made a few changes, and may move one of the shelves on the left to the right between the top and second shelf, which would be just scooting it over to the right.  I took a better photo of the south cupboard and shelves, and will go ahead and post it here instead of making a new post.  It's the view from the entry way of the back door. 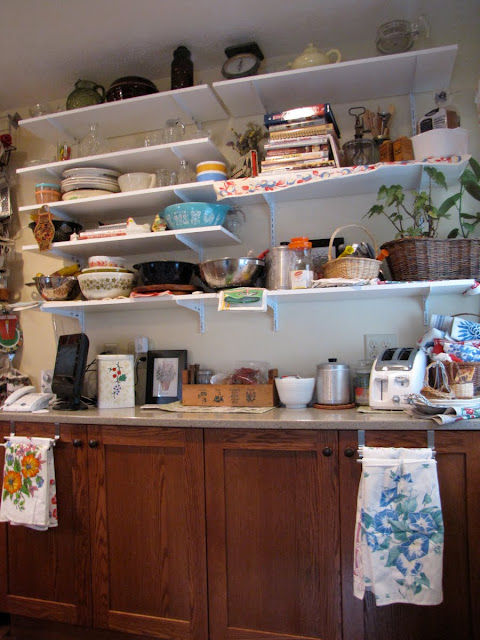