Butter and Eggs are Toadflax!

I showed pink and purple toadflaxes in my October GBBD post. At first, I couldn't remember what they were called, then when I remembered, I looked it up to make sure. Was I surprised when I saw that butter and eggs, Lineria vulgaris, which I have in a tub because it is invasive, is also toadflax! I've had these photos exported a few weeks, waiting for a chance to get them posted to tell the story of my butter and eggs, which look like little snapdragons to me.
A few springs ago, I think 2006, there was a weekend where a new friend gave me some plants from her yard, and I went to several plant sales in people's yards. I ended up not remembering where I got some of the plants, and what some of them were. I don't remember how I figured out what the butter and eggs were, but after doing some research found out they can be invasive. I decided to put the plants, which were already starting to spread, in a tub. It's a good thing, because I continued to have to pull them up from the ground for a few seasons. (I don't have photos older than the fall of 2007, because they got destroyed when Larry set up for a different computer I had.)
Here are some photos of the tub through time.
On 10/28/07, there were a few blooms on the lower right in the photo. 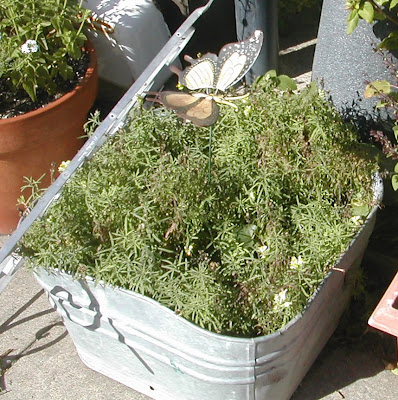 By 5/12/08, violets were trying to take over. I didn't plant them, but let some grow in the veggie garden nearby, so they somehow got started here, too. 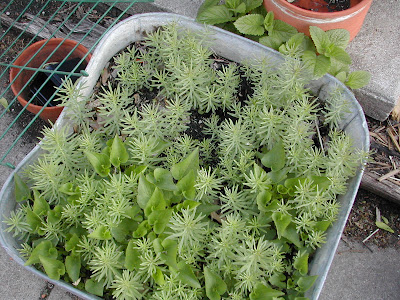 This photo from 9/7/08 shows the original color of the annual phlox that seeded themselves and grew into different colored blooms this year. The four o' clocks are self seeders, too. The violets were still going strong. 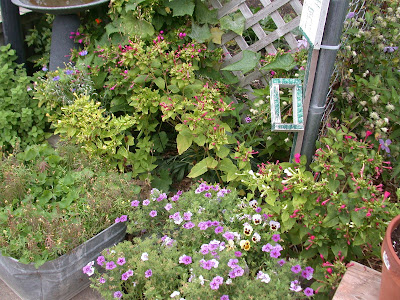 By 5/10/09, I finally got most of the violets pulled out. I was a little concerned about the butter and eggs, but figured they'd spread back out. I don't know how the phlox in the next pot spaced themselves so evenly. I wonder if I moved them around, or maybe I thinned them. I also don't remember if the 'Spooky' dianthus was already there, or if I planted it this spring. 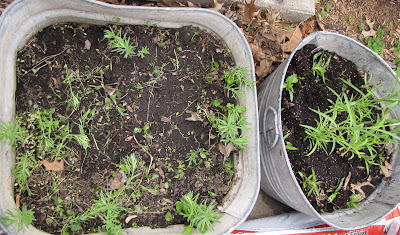 On 6/17/09, both the violets and butter and eggs were filling back in nicely. 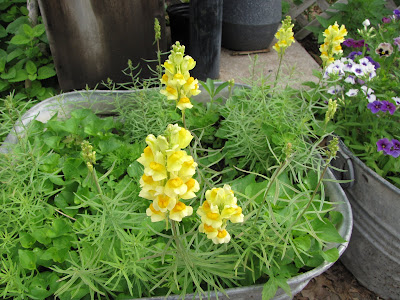 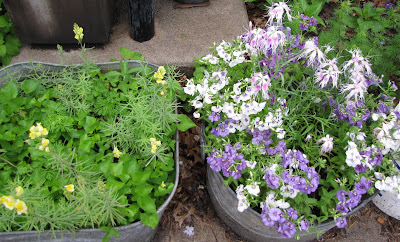 On 9/10/09, it looked like the violets were getting the upper hand. 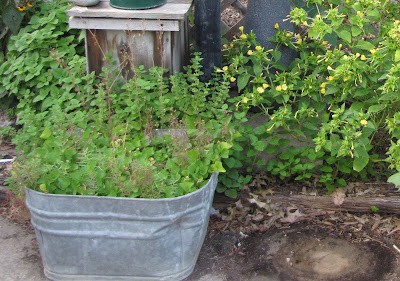 I went out and took the next 2 photos today, 11/10, since I didn't see any taken after the above photo. (This is the first time I've taken 3 days to write a post. LOL)
A week or 2 ago, I got the violets out, and am a bit surprised that the butter and eggs aren't thicker. I'm thinking they will fill out next year. Also, there are seeds that should sprout. I'll have to do a better job pulling out the violets while they are still small. 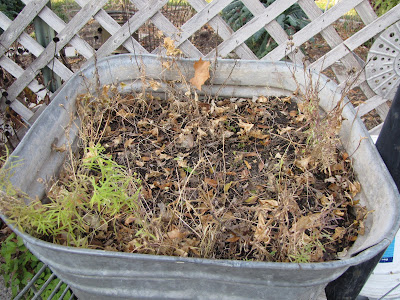 I'm thinking they will pull through, don't you? (Did you catch the pun?) I'll have to get those seeds put into the tub before they find another spot to grow. 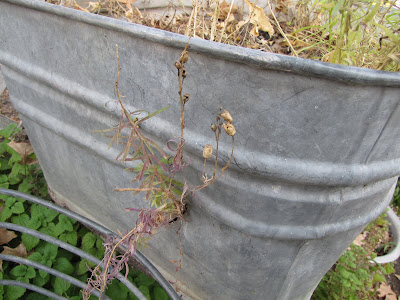 I meant to walk a block to the neighbors who have butter and eggs between the sidewalk and the street, where they can't travel far. I'll have to do that yet, to see how they are doing.
Do you have any experiences with this plant, or other kinds of toadflax? Some did tell me that the purple and pink ones aren't as invasive. That's good, because I really like where I have them.
Posted by Corner Gardener Sue at Tuesday, November 10, 2009