A Kitchen Tip-Repurposing a honey/syrup dispenser

(Edited 3/4/12:  For some reason, this only worked once.  The other times I tried it, the oil leaked out.  I wonder if it's because it got washed in the dishwasher.) When we first moved in, and bought a hoosier cabinet, I got involved buying some cool old things to add to what I already had in the kitchen.  I have two of these honey/syrup dispensers.  One, I bought on ebay, the other, from a local Goodwill.  They aren't exactly the same, so one is probably older than the other.

I had olive oil in this one, then, when it was empty, I put it on the counter to wash by hand.  Larry put it in the dishwasher.  It got nice and clean. 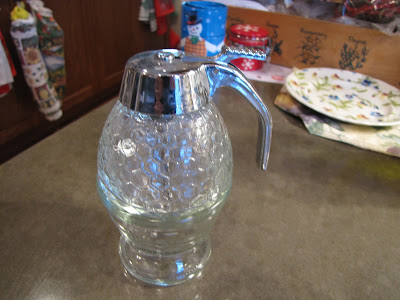 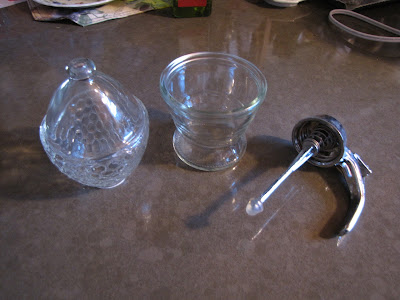 I put more olive oil in.  I love using it this way, because squeezing the handle and releasing right away lets out about half a tablespoon of oil, and if you want more, you just hold it open longer. 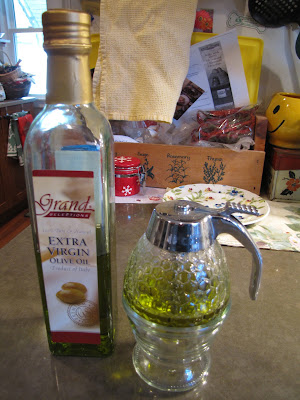 I was relieved that washing it in the dishwasher did not appear to damage the stopper.  I was wrong, though, and now have oil in the little cup as well as the container.  That's disappointing.  I just checked on ebay to see what these are called, and to see if they have any there.  There are a whole bunch of them, and one seller has a number of them for different prices.  I'm trying to decide if I'm going to get another.  Maybe I'll put a different kind of oil in the other one that I already have to see if that stopper is in good shape. 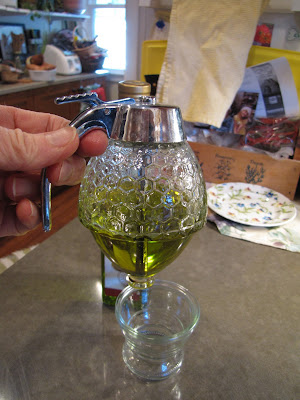 I wonder if those hot peppers from 2009's veggie garden are any good.  I've been to chicken to try them in anything.  I had planned on using a few at a time whole in some chili, and then pulling them out before serving it.
Posted by Corner Gardener Sue at Wednesday, March 09, 2011