A Skipper Kind of Day

I wasn't going to put up any new posts for a few more days, in an effort to get some gardening and housework done, but I did get some things done this morning, and when the clouds let the sun through, the skippers came out, and so did my camera.  Well, first a couple loud geese flew over kind of low, and I had run in to get my camera in case more followed.  The skippers caused me to use it after all. So, I now have a post for Misty Dawn's Camera Critters.  The link is in my sidebar.

I pulled some of the verbena b. from the path in the veggie garden so we can haul compost around easier.  I made sure there was still some for the butterflies that are still around.  There were a number of skippers that were on the shy side.  Most of them looked to be the same kind, so I just put one of the photos in instead of my usual bunches. 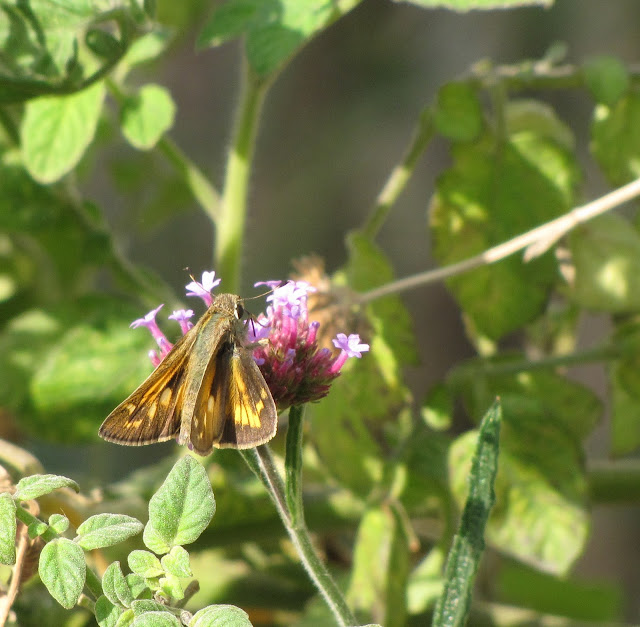 I'm pretty sure this is an Asian Lady Beetle, which seem to not be around as often as in the past.  I haven't had one bite me for awhile, anyway.  Their bites hurt! 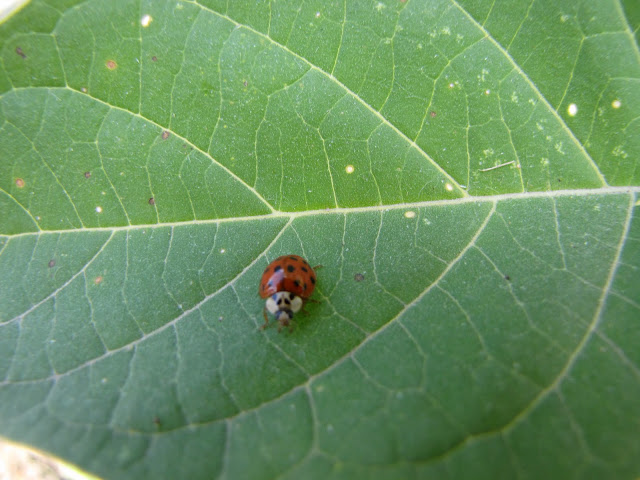 Here's another skipper enjoying the Chocolate Joe Pye Weed, in the bed on the east side of the veggie garden. 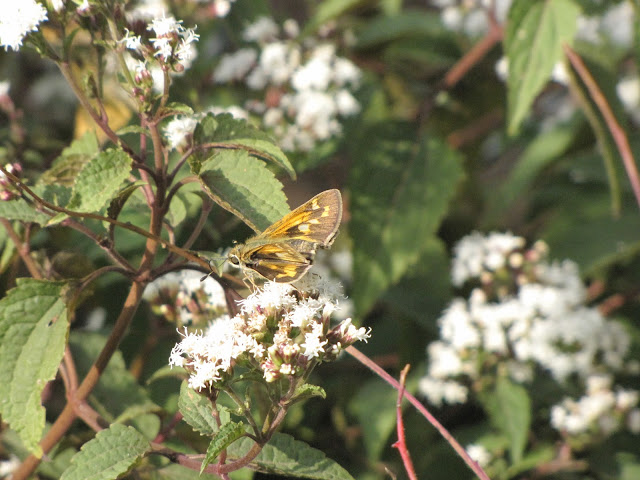 A couple of black winged moths were either on the Chocolate Joe Pye Weed or its relative, Eupatorium, 'Prairie Jewel', which is next to it. 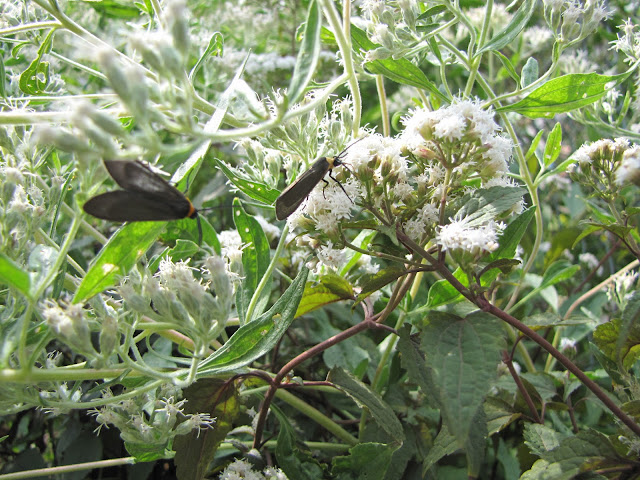 I love the deep blue color of this volunteer salvia, and so does this skipper. 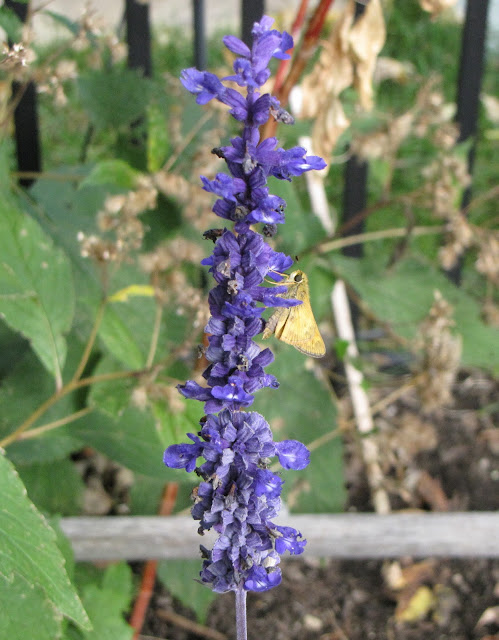 The New England Asters are still providing food for the bees and other critters.  Some of the asters are finished blooming already. 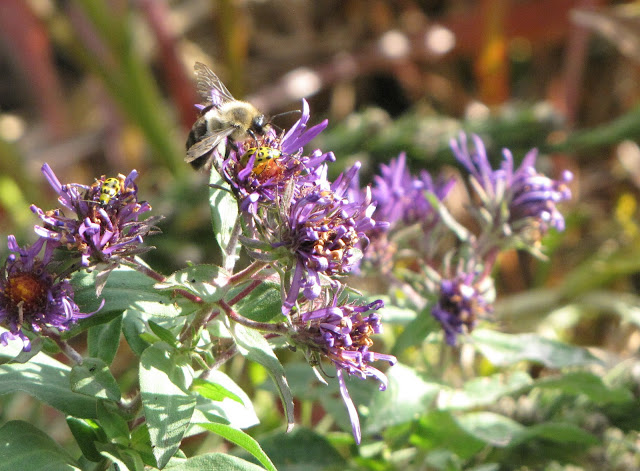 There were a bunch of tiny insects humming over the 'Fireworks' Goldenrod.  I just pointed toward them, and took some photos, hoping some would be visible.  I see I got a nasty beetle, and something smaller above it. 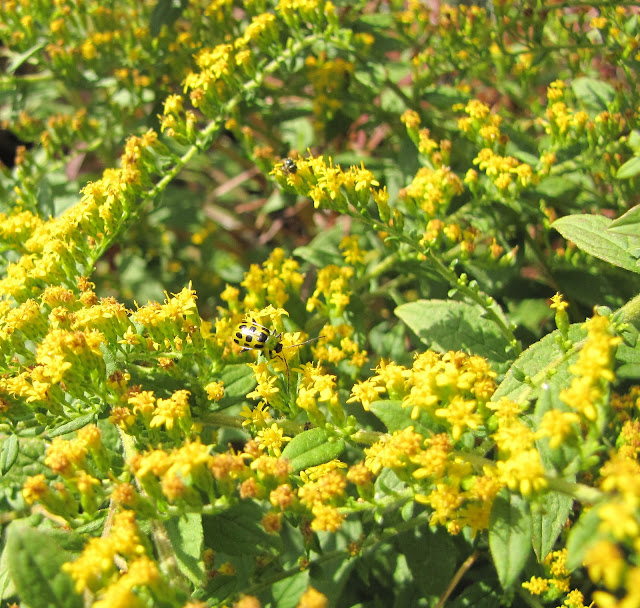 This skipper is atop a salvia I purchased this spring.  It's not as deep a blue as the volunteer above, but I still like it.  By the way, I've mentioned in the past, that the way I got the volunteer one started was by laying spent stems from some at church, which always have a bunch of the lovelies in the bed I got the stems from. 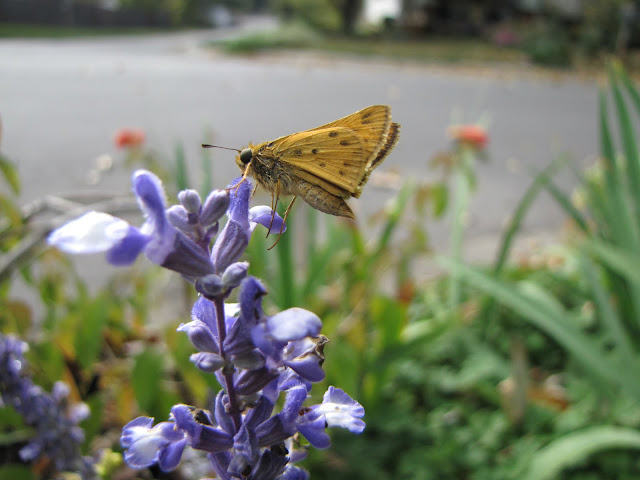 I haven't seen any monarchs, ladies, or swallowtails lately.  I supposed the monarchs are on their way to Mexico.  I did see a silver spotted skipper when I was walking in the back door after picking up our grandson from my parents' house.

(Added later in the day:  KJ and I saw a monarch flitting around as the leaves were falling.  It was pretty cool.)

I hope you're having a nice weekend.    It sure is a beautiful day here!  Now, back to work I go!
Posted by Corner Gardener Sue at Saturday, October 23, 2010