Back to being a Winter Wonderland

I'm thinking it was a 50 percent chance of snow that gave us 5 inches in the night.  We went to bed last night with a light snow, and figured it wouldn't be enough to close schools.  Actually, Larry got the call after he had taken his shower this morning, so I got to turn my alarm off and sleep some more, but he had to get up because Heidi pestered him to stay up.  While I've said I am finished with winter, and want spring to be here now, I am thankful for the moisture, and hope it takes awhile to melt, so that the plants can be protected from the drying winds.

I kind of like the contrast between the flags, fire hydrant, and everything else in this photo.  I am, however, working on Larry to take the flag pole down.  It was his dad's, but I have actually been more sentimental than he has about holding onto things that were his parents'.  (We own and live in the house he grew up in.) We'll see how that pans out. 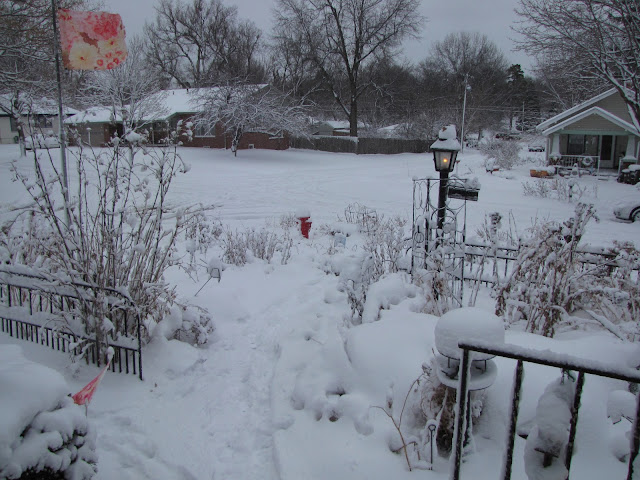 I was planning on starting to take down the dead foliage soon, a little at a time, to make it easier, but I don't mind waiting for the snow to melt.  This is Joe Pye weed with snow hats. 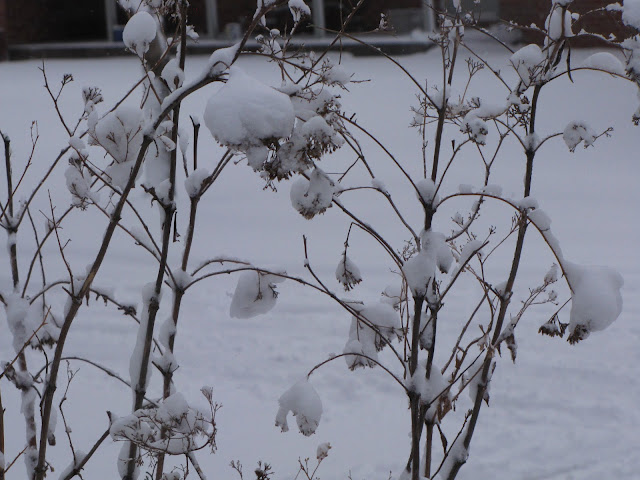 I am thankful I discovered the fun of growing wild quinine, a native to our area. 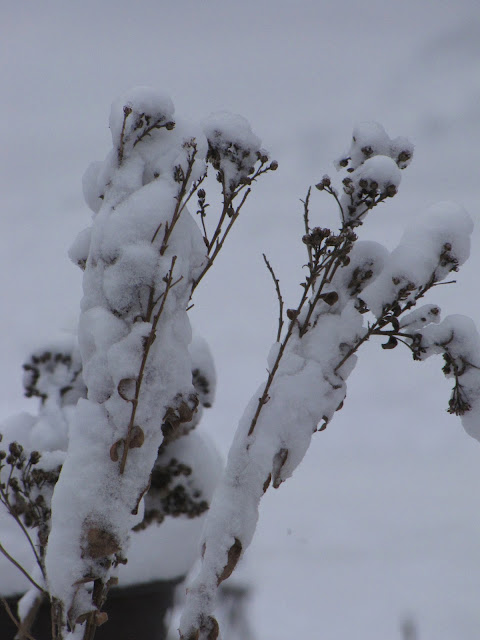 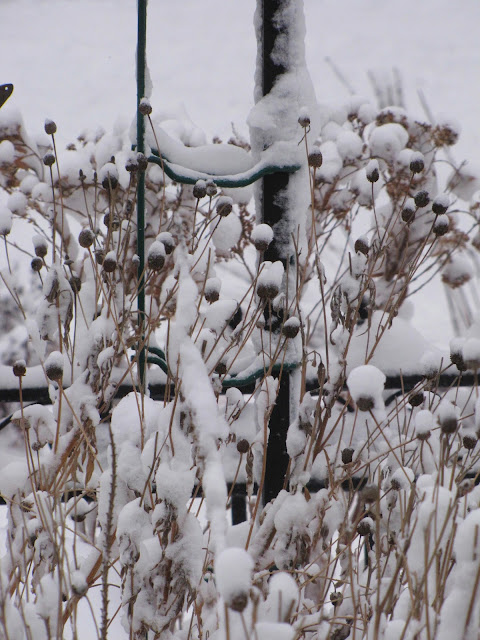 They give us the measurements of snow from the airport, which is not near here, and also from the news station, which is two blocks away.  It does look like about 5 inches on one of the hollow branches that caused our silver maple tree to need to come down. The reason there is another cut, is because there were squirrels in there still, and the arborist took steps so they would be safe.  (That's a link to the post I did on the tree coming down.) He tied this up, and got it down softly, so it wouldn't fall with the squirrels in it.  He was so sweet! 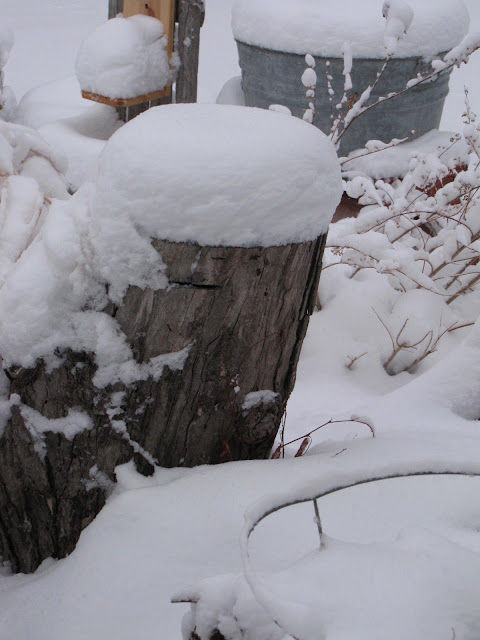 I think the snow is also pretty on the different structures in the garden, some to protect plants from the rabbits, and others to provide support to plants. 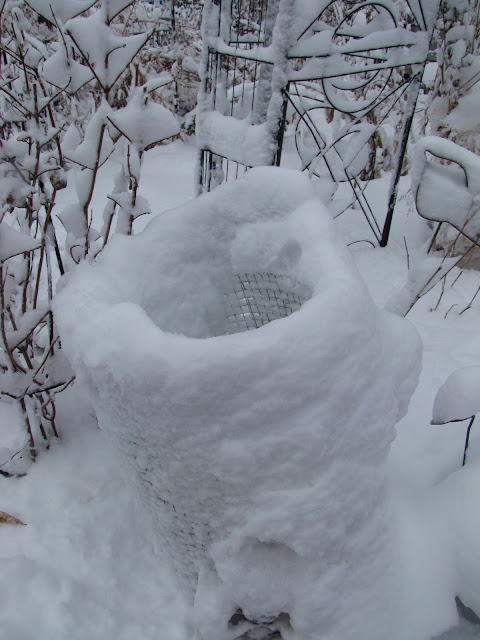 Heidi had been out with Larry awhile, while he was shoveling, then, when she saw my camera, was ready to come out with me.  In the mean time, Larry went in, and he is at the door here, trying to figure out where Heidi is. 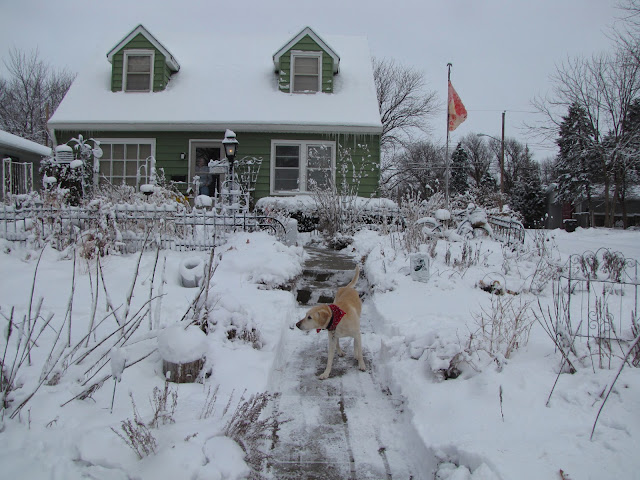 He called her to come in, and now, she was at the door, watching us, maybe trying to figure out why she was back inside. 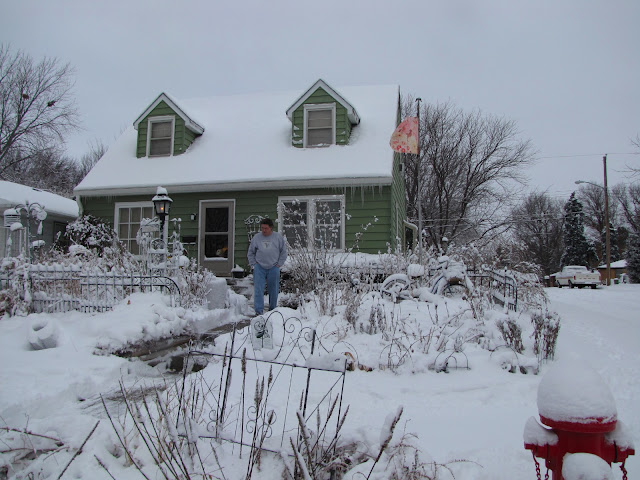 Here are some more coneflowers or something with their lovely caps of snow. 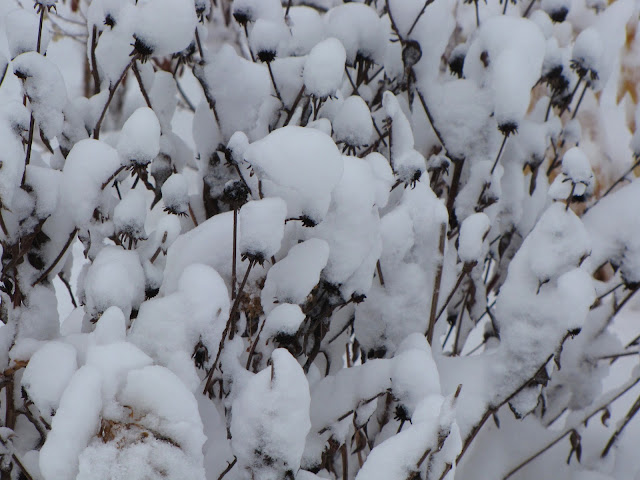 I like the butterfly and other structures with the snow on them. 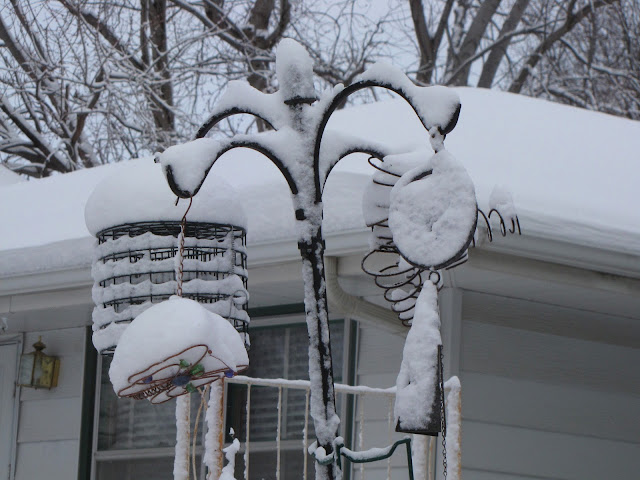 I always like to take photos of the fire hydrant. 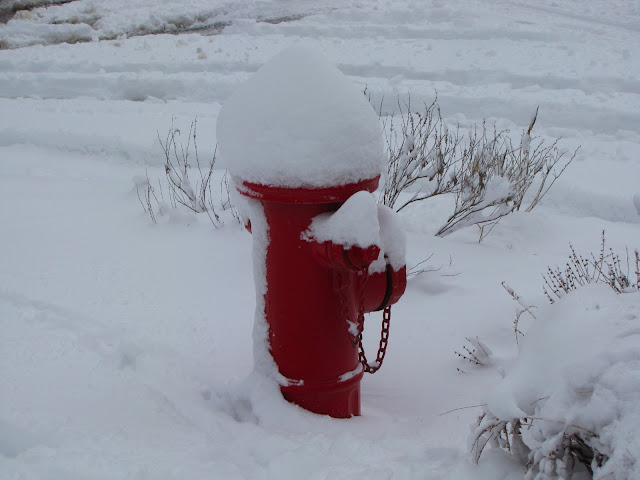 Soon, it will be February, and I will be planting lettuce, radishes, spinach, and carrots.  I think I'll plant more kale, too.  It lives more than one season, but it blooms after the first year.  I want to make more use of it than I have in the past.  These veggies will come up as soon as the soil is warm enough.

Spring has sprung for some of you garden bloggers, and I am happy for you.  I will be trying to get more blogs visited, and enjoy your new growth, while waiting for ours.
Posted by Corner Gardener Sue at Wednesday, January 30, 2013