The Decision is Made

I had asked to see the assortment of knobs that we chose from in the beginning, and the contractor told me that they use the ones at a local business that I didn't think to go to, as it is clear across town, several miles south of South Street, which used to be considered way south.  So, today, after work, I took the trek, and found some knobs I like that aren't as expensive as the ones I like the best from the internet.  When I found photos of the ones I picked out today on the internet, I found that the round knob is made of brass, like the expensive ones, and the pull is zinc, and actually costs less than the knob.  I'm thinking that's a good compromise, and they are very similar to the expensive ones.  They are called the same color, oil rubbed bronze.  Each company seems to have their versions of it, but these are pretty close.
So, here they are: 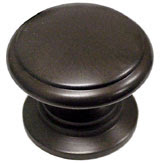 I do like the other pull a bit better, but for the difference in cost, this will be fine.  Oh, and a man at the store showed me the counters and edge we had picked, and a sample of the color of the cupboards.  I couldn't remember for sure what we had picked, but did guess correctly at the counter colors.  The main counter is not one I love, but is acceptable.  I dare not see if I can change my mind about that.  It will look good with the rest of the things we picked out.  I love the counter that's going on the south cupboards, though.  Larry thought it was too light for the counter around the sink, or something.
I got the grid ordered last night, but was given a message that there was no shipping to our area.  I talked to a woman on the phone today, and she told me that the shipping for a 4 by 4 foot grid would be more than the cost of the item, but she said she'd give me the fasteners to hold them together if I would like to get 2, 2 by 4 grids.  She was so nice about it, and I didn't want to start over looking, plus, anywhere I found the larger one, there would still be the matter of shipping.  So, she said they should be shipped on Monday.  I'll tell more of the story when I post the after photo.  We have 3 weekends left to get the kitchen ready for the remodel.
Thanks again for all of your suggestions and encouragement.  Now, I can stop obsessing and focus on getting the house in order.  Maybe, I can even find some blog reading time!