Last year, on February 23rd, I planted my first lettuce, radishes, spinach, and such.  It will be awhile before the snow in the veggie garden melts, as much of it is on the north side of the garage.  I don't know why I didn't think to take a photo when I went out this afternoon.  I'm thinking about mixing some seeds in with some sand, and throwing it on top of the snow.  I wonder if birds will eat the seeds.
FlowerLady mentioned being cold in the 40s, and Kate in the 50s recently.  Here in Nebraska, our "normal" highs for this time of year are the 40s, but we have had very few of those, with lots of days not making it over 28 degrees.  Today, it got up to 39ish and people kept saying what a nice day it was.  I did make it out to the front yard to take a few photos.  We are expecting 2 to 4 inches of snow over the next few days.
I'm thinking these are daffodils coming up in the bed on the south side of the house. 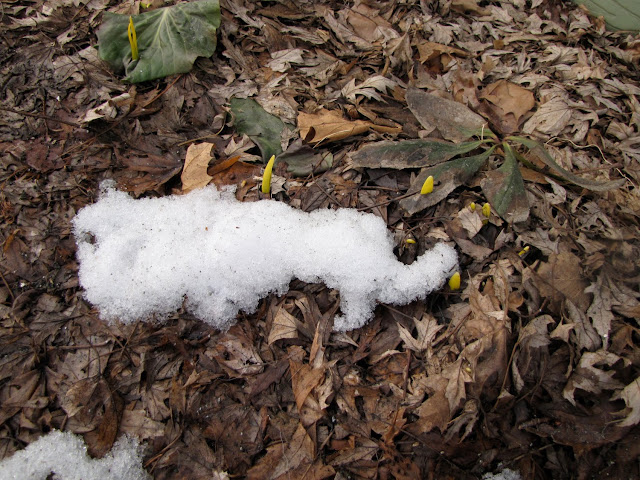 There are still some green things, such as iris and snapdragons in the south sloped front bed. 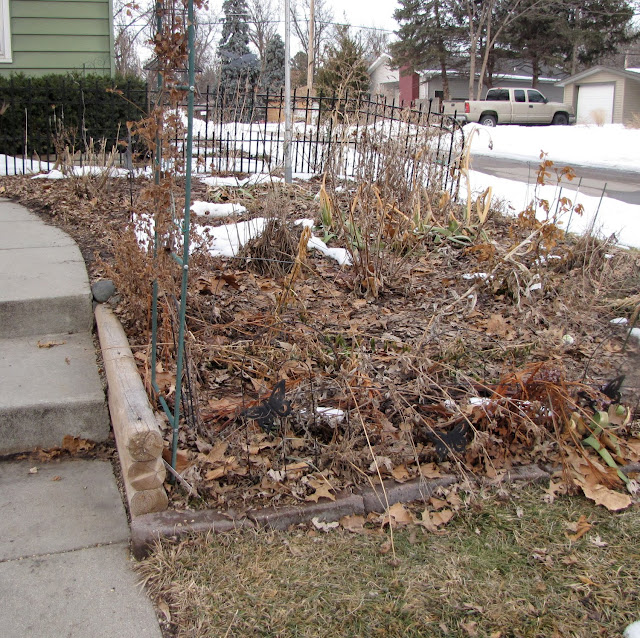 The area by the curb is still snow covered.  I noticed someone has walked through the bed, so I later went out and cleared the snow off of the stepping stone path.  I hope it doesn't get slick.  Maybe we should put some sand in the path. 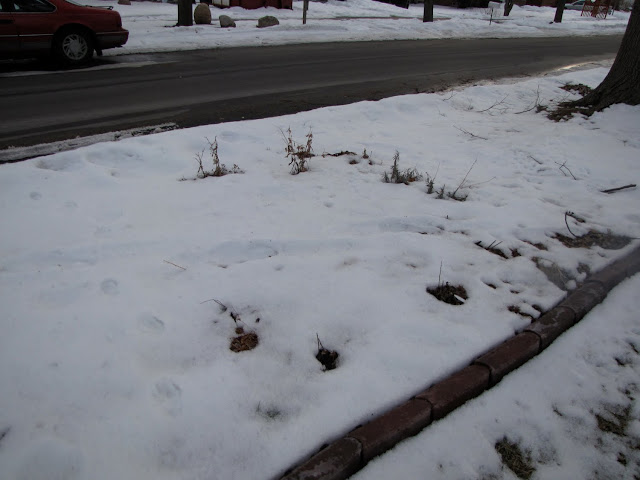 Doesn't it look like I took these photos on different days?  This is a perennial geranium that likes to spread in the raised planter around the tree.  I found out you aren't supposed to put beds around a tree like this, but my in-laws already had it there.  I don't think it's good to take it down if it's been there awhile. 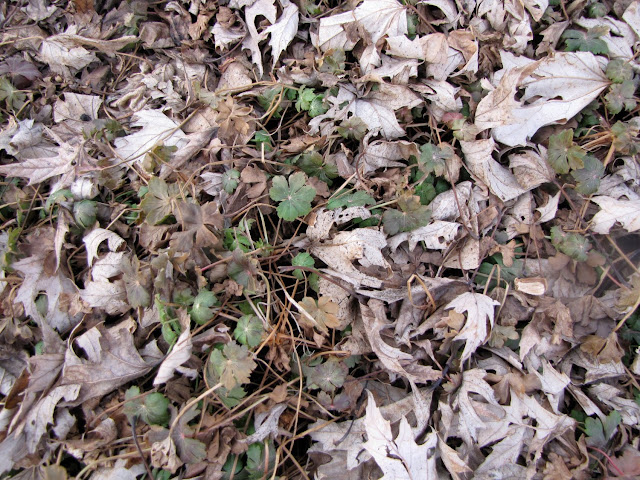 I was please to see some pansies growing in a wash tub from last year have survived the winter so far.  They should be OK at this point. 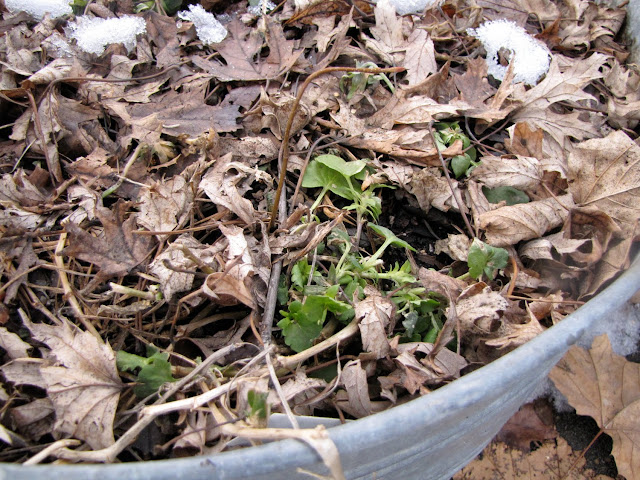 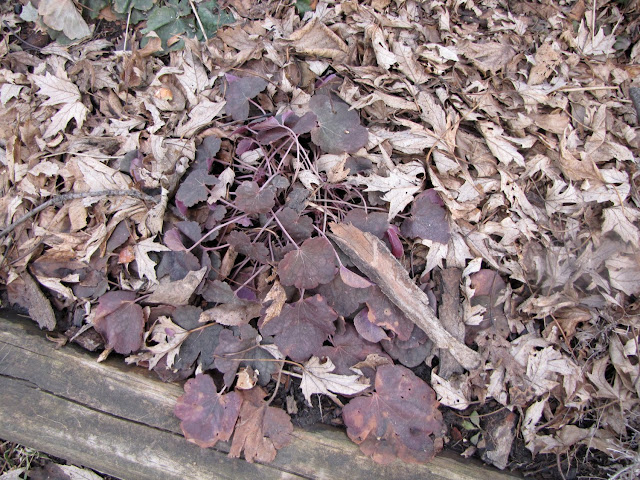 Some of the lambs' ears look to have been evergreen so far. 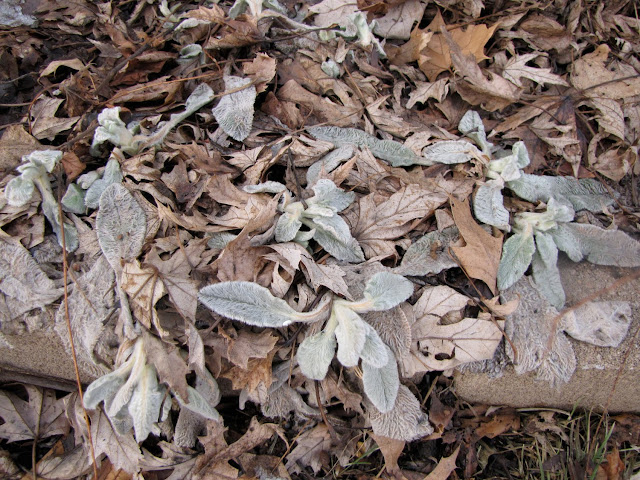 I saved the best discovery for last.  I have some of my hellebores planted in the south raised bed where the daffodils in the first photo are.  These are right next to the house, so I'm thinking they could be their own little zone 6ish instead of 5b.  Most of them are buried with leaves, but these sticking out show flower buds!  I am so pleased, and even though it's cold out, I know spring is on its way.  (I wonder what has caused the hole in the leaf on the left side of the photo.) 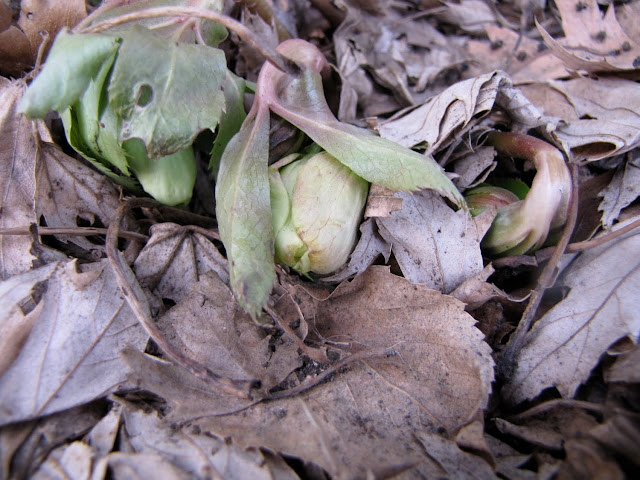 I planted several kinds of hellebores.  I like the red on the leaves of this one, and I think that's a flower bud on the lower left, as well. 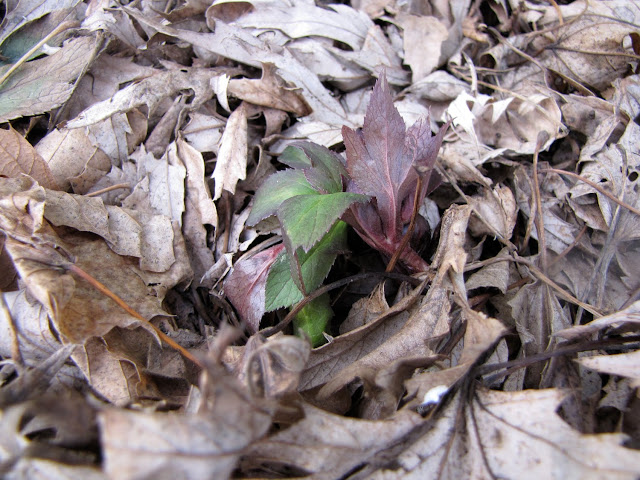 I hope we all experience nice spring weather soon, and our plants have survived and are thriving.  May all your seeds sprout and grow as well!
Posted by Corner Gardener Sue at Thursday, February 18, 2010