Some Spring Blooms from Last Year for Wildflower Wednesday

Today is the fifth anniversary of Wildflower Wednesday, hosted by Gail, blogger of Clay and Limestone.  For the occasion, she showed her first post, with some editing.  I like what she shared about learning to grow native plants.  Those who know me know that I am scatterbrained.  I had seen Wildflower Wednesday posts, and decided to join April 7, 2010, not paying attention to the fact that it was the third Wednesday of the month, so it was not on the right day.  Here is a link to my first post.  It shows pasque flowers.

The photos for today's post are from the last week of April and first week of May, 2014.  These are not all that were blooming, though. For each plant, I included a link to the Lady Bird Johnson Wildflower Center where there is information on it.  For those in my area, most of these plants will probably be available at the plant sales held by the Nebraska Statewide Arboretum in the spring.

Fremont's clematis is one of my favorites.  It is a long lived plant in my experience, and has very cool blooms.  This is a young clump.  It will grow larger and have more blooms in the next few years.  I had a clump in an island bed surrounded by concrete at church until they decided they wanted everything out, and planted a tree and some shrubs there.  It rarely got watered, and it did quite well.  I transplanted it to our curb area last year, but am not sure if it is one that can survive transplanting when so mature. I've had Phlox divaricata for a number of years.  It spreads like a groundcover, but is not aggressive.  I am pleased to see they are coming up already. 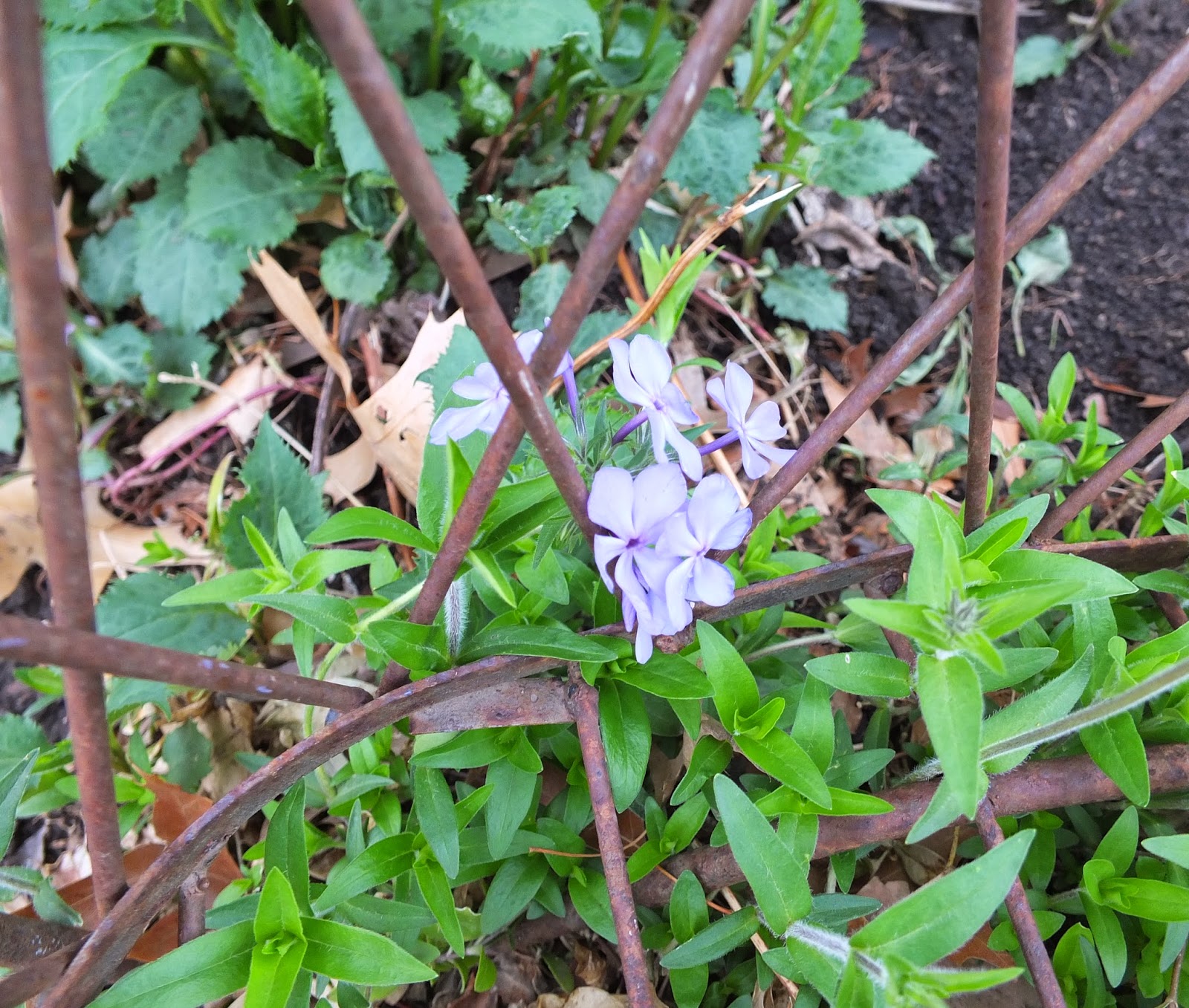 I have had what I'm pretty sure are Common blue violets for many years.  A clump volunteered in the vegetable garden in full sun.  They seed themselves around, and I've had to thin them out from time to time.  I have been remembering to pull a few leaves to add to the salad the last few years.  What I'm feeling bad about, though, is that they are coming up in our next door neighbor's lawn, where she only wants grass.  I just read that the seeds are produced in the bottom flowers that do not always open, that have the seeds.  I should try to get those cut off so they don't seed so freely. 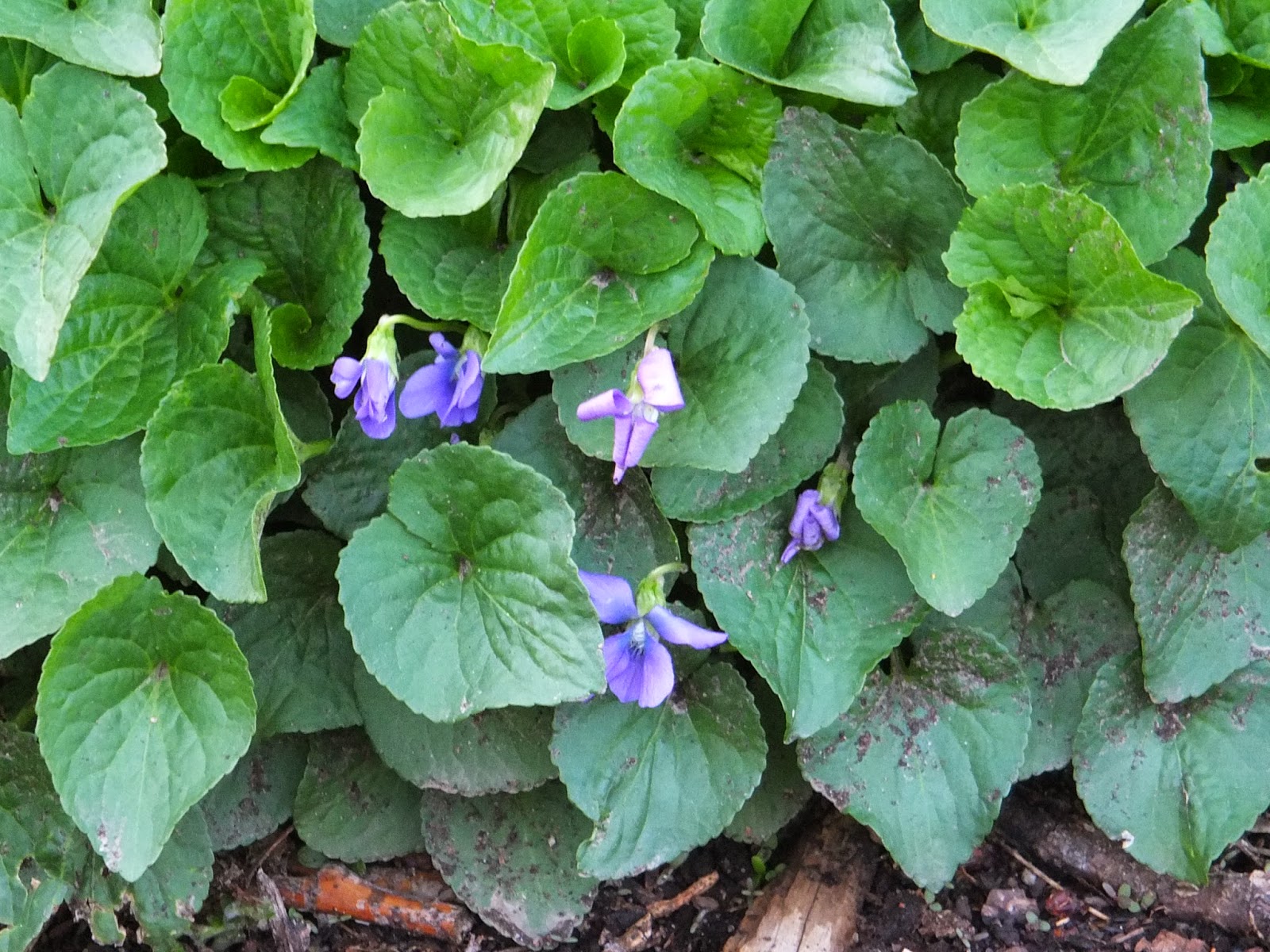 Virginia bluebells are not native here, but I sure do enjoy the early spring blooms on the east side of the house, where they do not get the hot afternoon sun.  I hope they seed a bit. 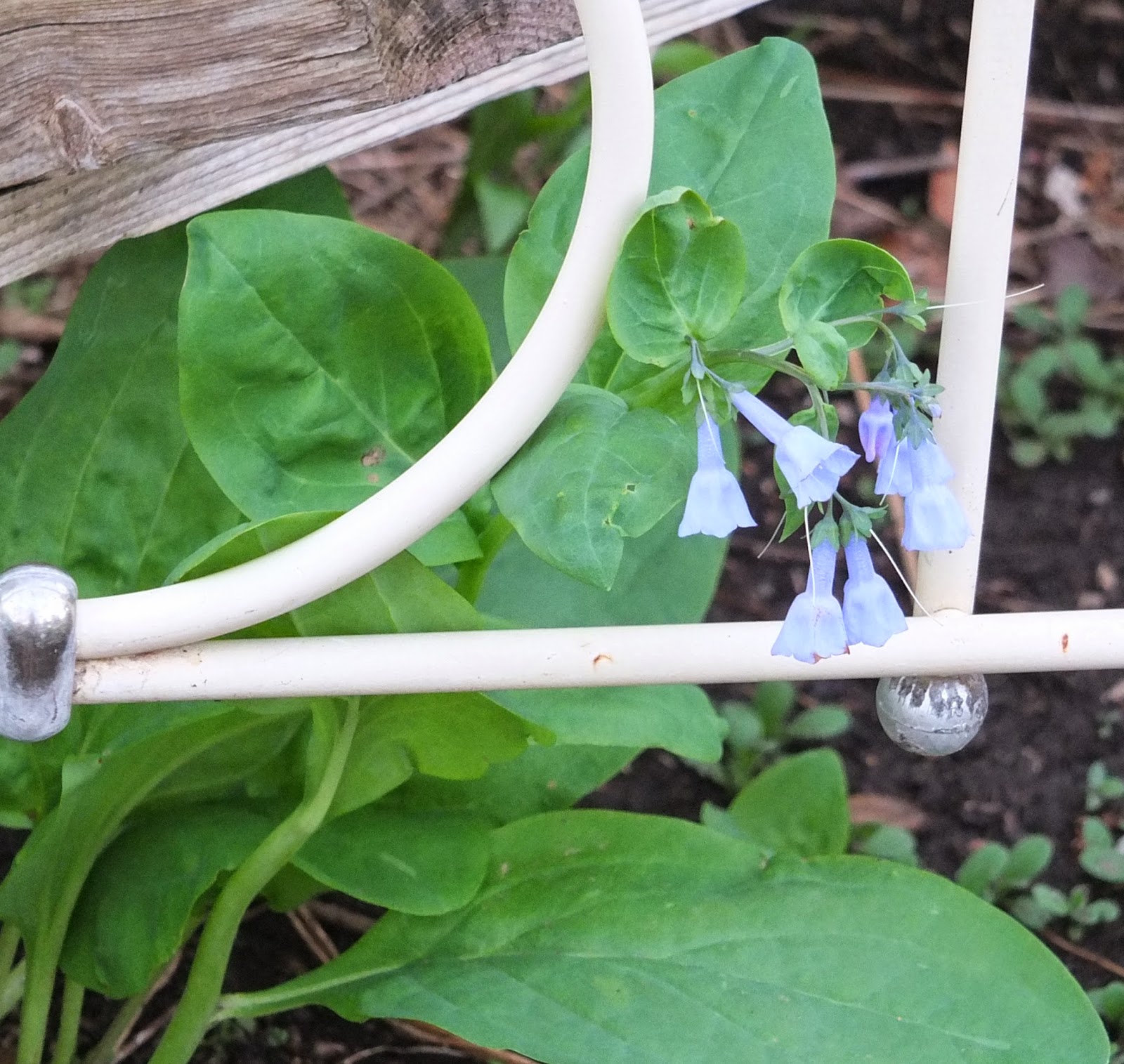 Amsonia hubrichtii is one I've posted on a lot.  It is one of my favorites, but I wish the bloom time was longer.  Still, the foliage is very nice.  I just read where one should cut them back to six inches after they bloom so they will mound.  I do cut them back frequently, but not always.  Some years, I have let them seed, and have gotten a few volunteers to put in other spots that way.  They are not native to Nebraska, I just noticed. 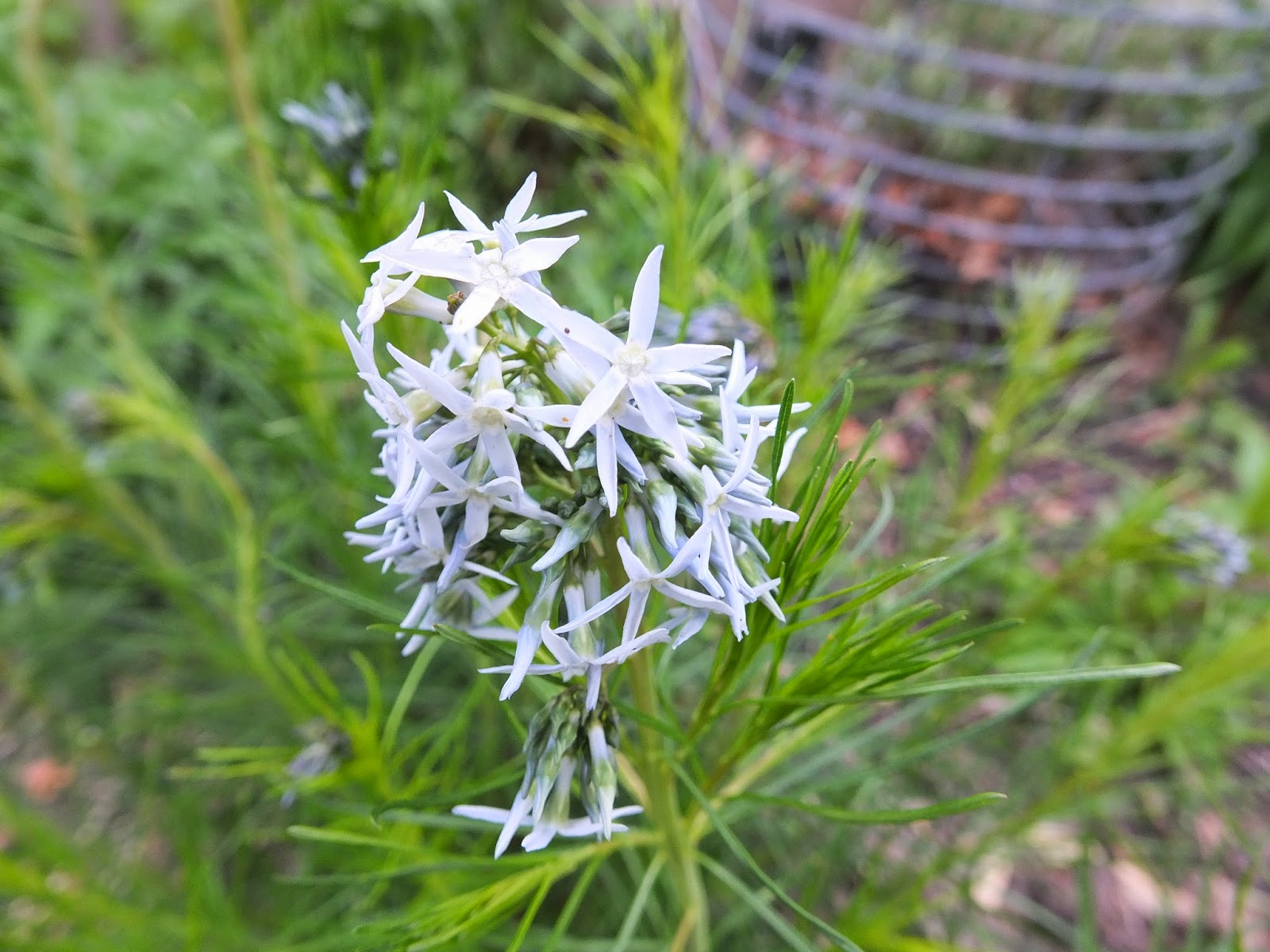 I have gotten several kinds of Amonias over the years.  This is either tabernaemontana or illustris.  This is the kind I saw in a yard when walking into my sister and brother in laws' alley and fell in love with those beautiful blue blooms. 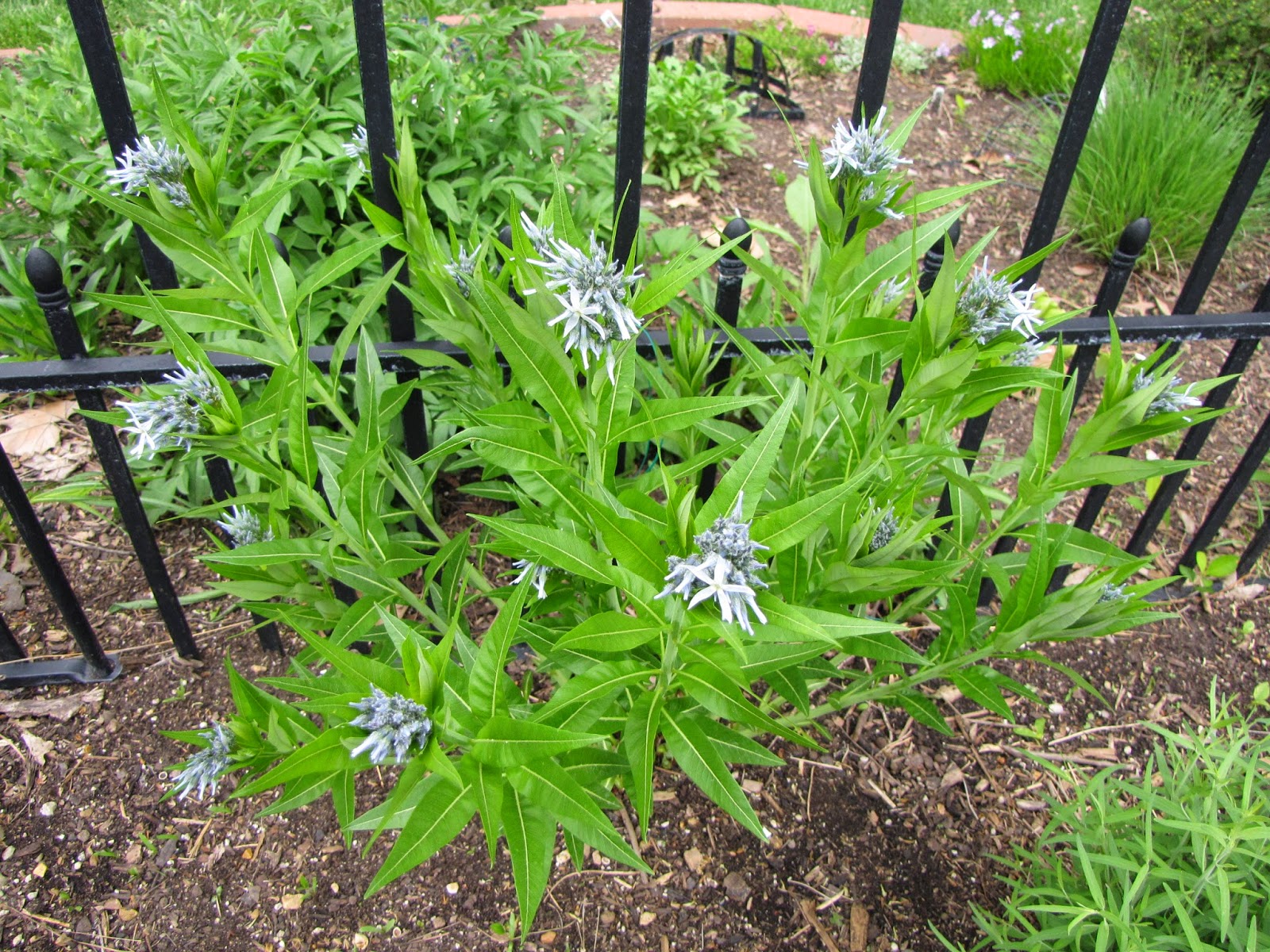 The yellow blooms are Golden alexanders.  I think I fell in love with PPPPs from Gail's posts.  I first found Phlox pilosa, 'eco happy traveler', then found the plain Phlox pilosas, so now have both, and do not remember which is which.  I imagine I'll end up with my own kind of they cross pollinate. 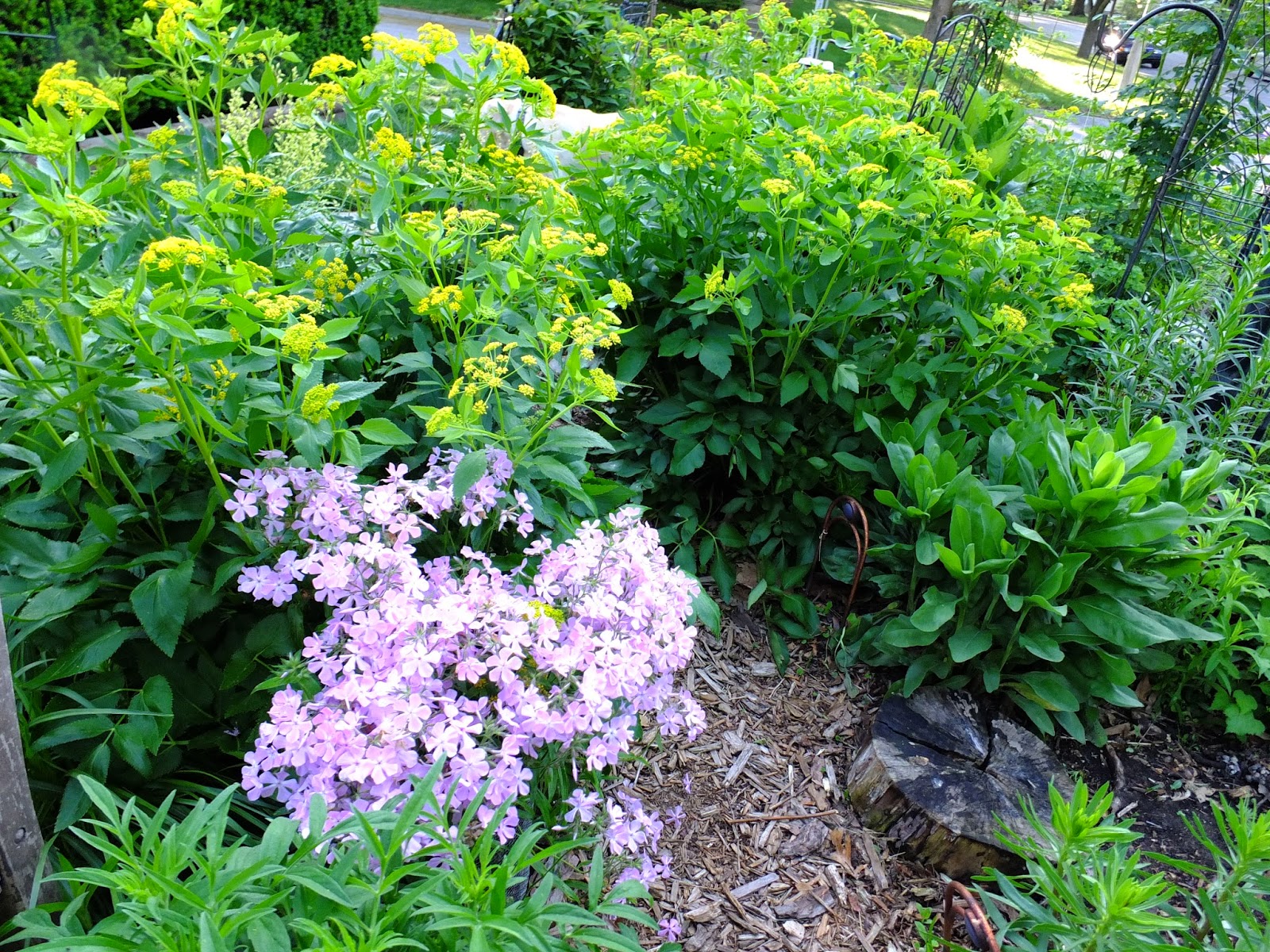 The two plants in front are Prairie alumroots, what I refer to as native coral bells.   The pinkish blooms between and beyond the Golden alexanders is what I think is Shell leaf penstemon. 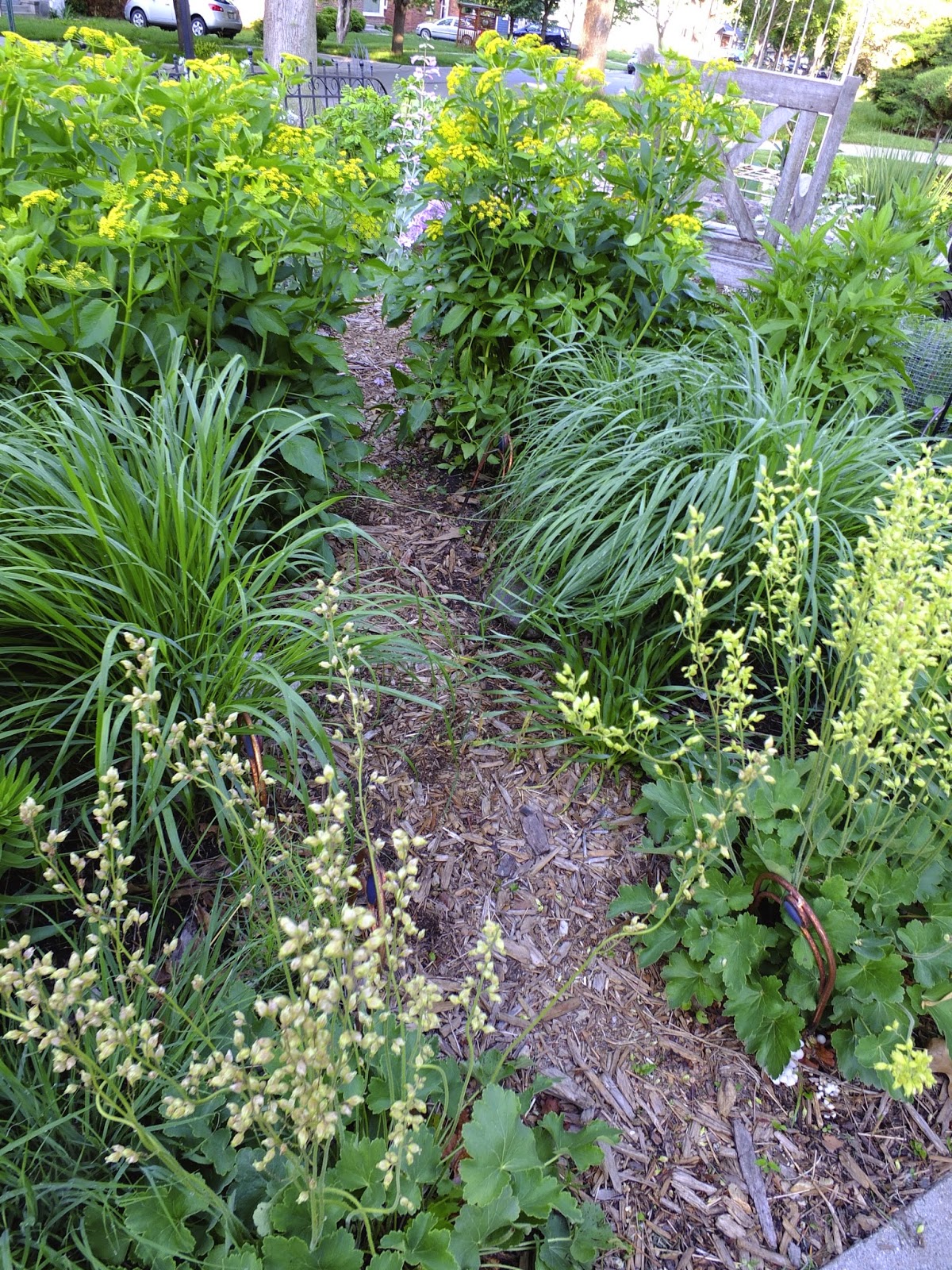 Purple poppy mallow is a good plant for the curb area. 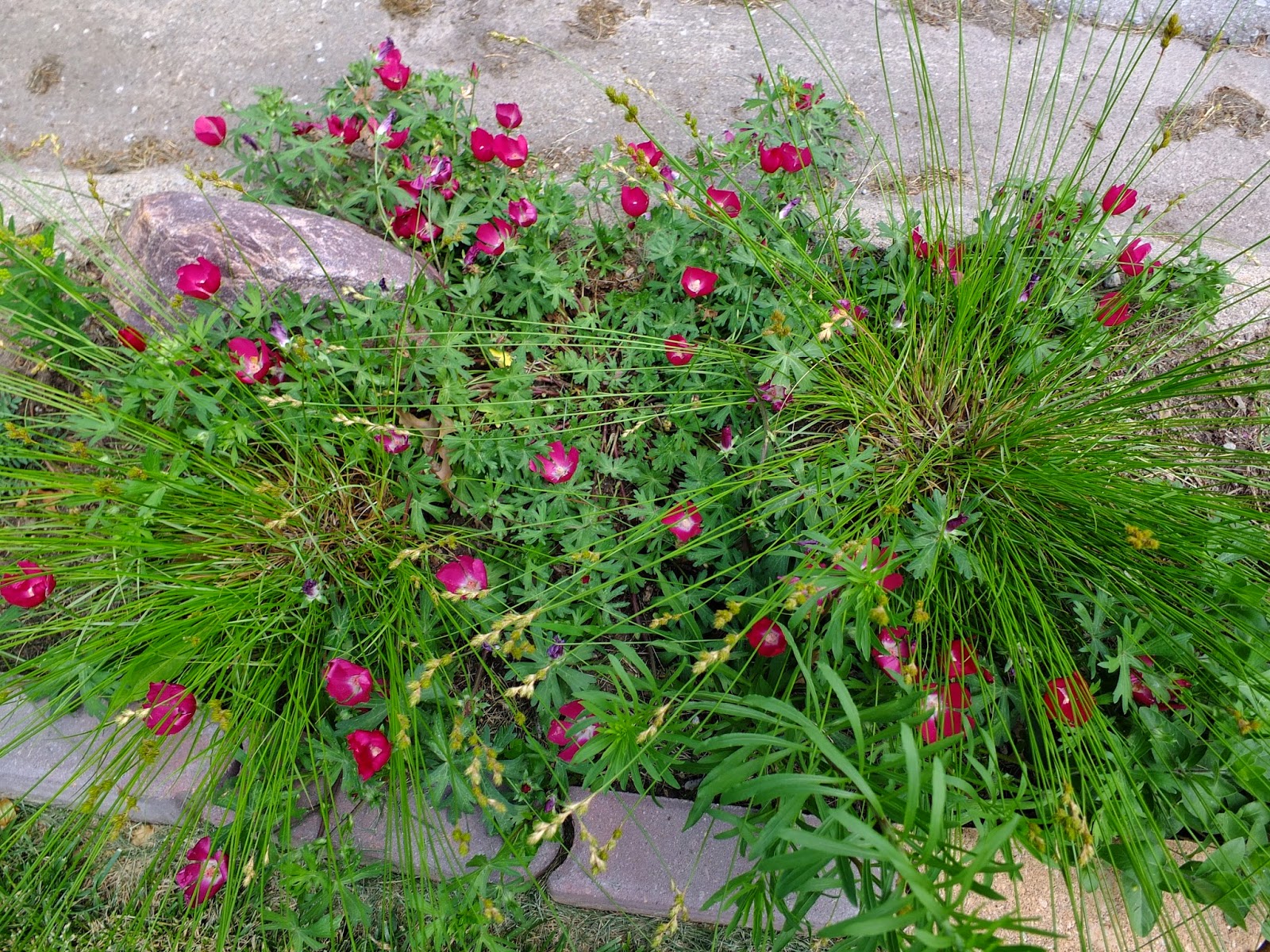 Most of the snow has melted, but for the next couple weeks, we are to have colder than normal temperatures.  I am so ready for spring to get here!  It would be nice if I had an actual wildflower to post for March's Wildflower Wednesday!  Thanks, Gail for hosting this!

Oh, I forgot to mention that the things you've heard about liquids and computers are true.  A few evenings ago, I was at my computer with about a fourth cup of coffee.  The phone rang, and since our granddaughter was sleeping in the next room, I jumped up to answer.  I am not even sure what happened, but the cord to the computer was involved, and some things on the table, including the computer and coffee flew into the air.  After a few days of drying it out, the keyboard continued to type things on its own, so Larry made a list of possible computers for me.  I took that to a local Apple dealer.

The guy at the store was very patient with me.  He knew I was sad that I really couldn't afford to get another 15 inch monitor, but still wanted to compare the 13 inch to it.  I got my blog up on two computers, and found some posts from last summer.  He had already asked me what I use the computer for, and we got to talking about gardening.  He just does vegetables, because he wants to have the reward of picking something to eat.  I told him I am into growing native plants, and get rewarded by seeing so many insects on them.  He cringed at the thought of bees and wasps, but when he saw the photos from my blog, he asked if he could scroll down to see more.  He said they were good photos, which made me happy.  I hope that I planted a seed in him that will sprout, and he will end up finding some native plants to add to his garden.
Posted by Corner Gardener Sue at Wednesday, February 25, 2015