I started blogging October 1, 2008, and this is my 670th post.  Wow, it's been four years!  I have noticed I don't post as often as I used to, partly because a former student talked me into starting a Facebook account so I could see her photos.  Little did I know that I would end up there almost every day.  It is fun, though, and it is cool when both local and blogging friends end up interacting and liking each others' statuses.

All of the plants in the garden window spend the summers outside. 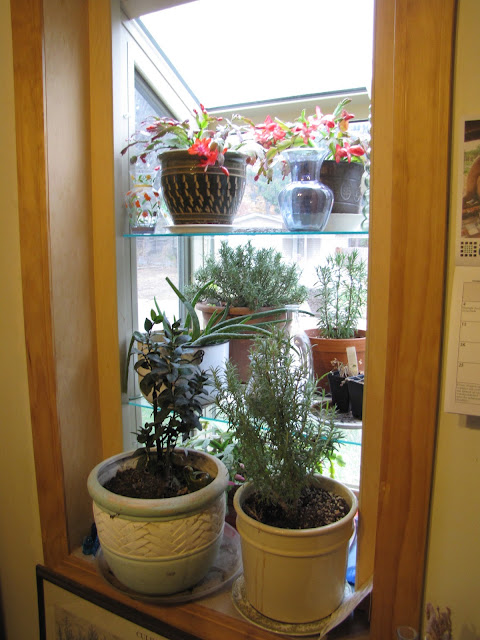 Not too long after coming inside for the winter, the holiday cactus plants start blooming. 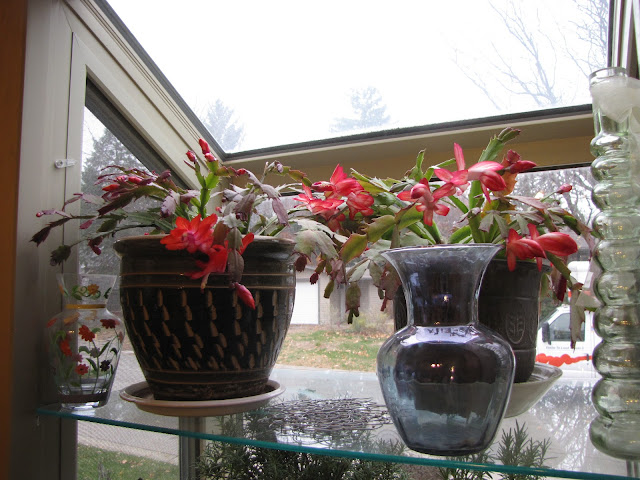 I looked at some past posts, and am pretty sure this is the 'Caribbean Dance' I got two years ago. 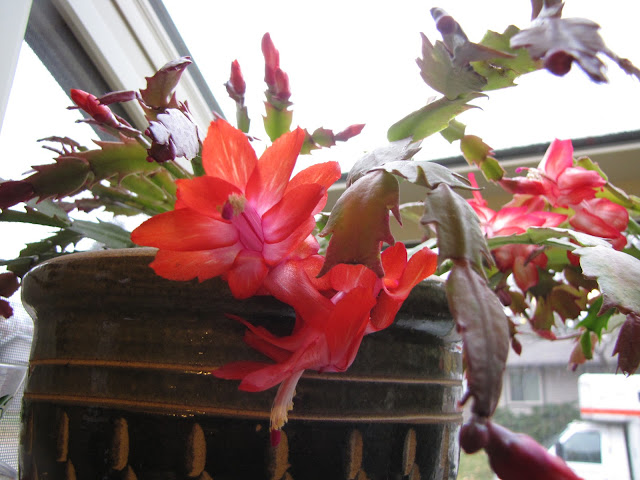 This looks to be the 'Dark Marie' I got three years ago. 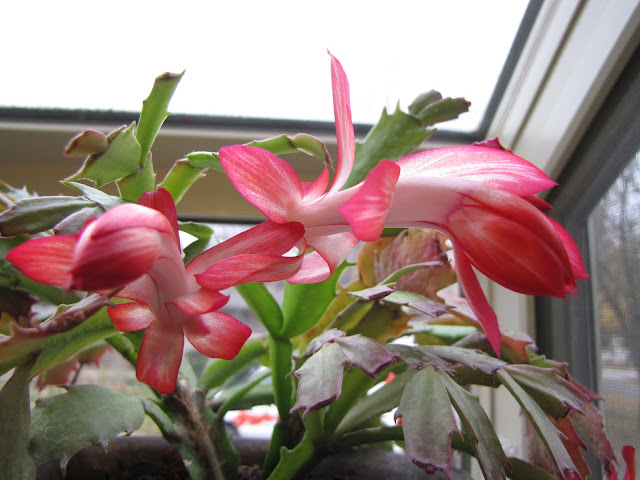 I have been having pretty good success overwintering rosemary in the garden window.  I think I usually put the aloe vera on the shelf in the toy room, where a number of other house plants are.  The poor parsley plants should have been put into a larger pot, but I kept forgetting to.  Maybe I will get that done one of these days.

Can you see the moving van in the street, and the bird feeder on the window?  We've heard that the guy who owns the house across the street where I attempt to have a second vegetable garden may have a buyer for the property.  Some neighbors said the renter had moved.  I never saw anything going into or coming out of it, so I don't know what was going on with it. 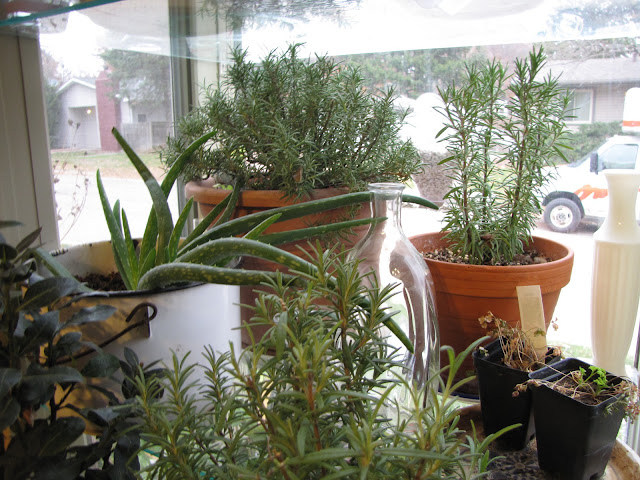 I've had the bay plant a number of years.  It had some problems this summer, but is looking better now.  I've used a couple leaves for cooking the past couple of weeks.  That's a third rosemary next to it.  I dump any unfinished water, coffee, or tea onto the plants each day.  The best way to keep rosemary alive through the winter is to keep it from drying out. 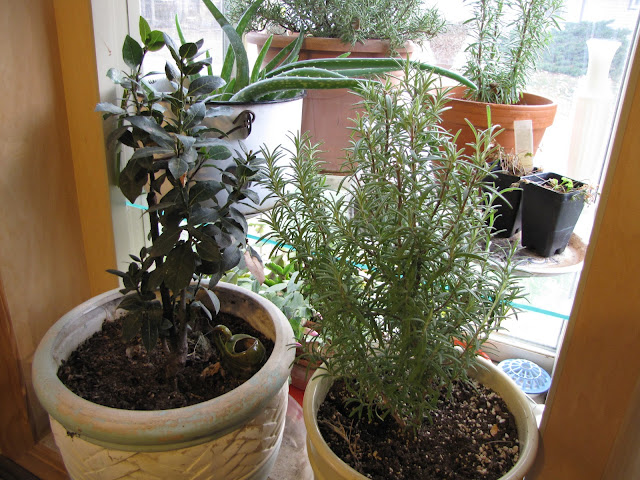 It's always a fun surprise to me to see those buds forming on the holiday cacti.  I love it!  This one is 'Naomi', and I've had it longer than the first two.  When I looked at the past posts, I saw that this has bloomed earlier than this before. 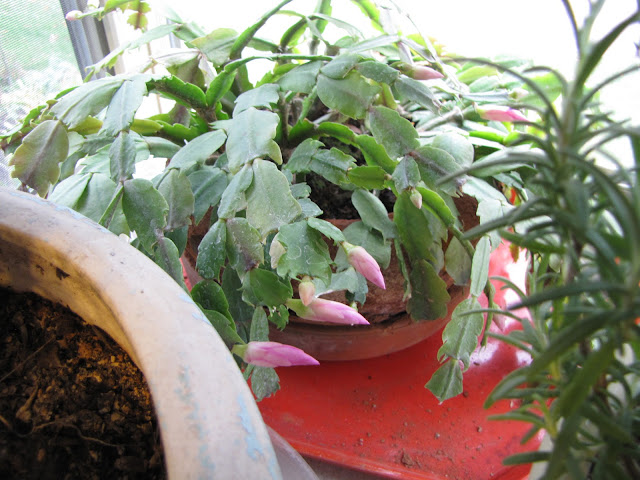 Here's a sparrow eating the safflower seeds in the feeder.  When we had sunflower seeds in it a few years ago, the squirrels somehow got to it and knocked it down so the seeds would spill onto the ground for them to eat.  Later in the season, we should see house finches, juncos, and I can't remember what else right now. 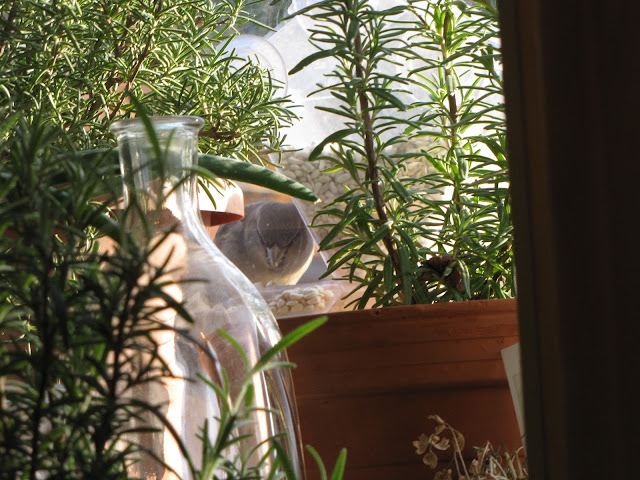 I am so glad the election is over, and the ads are finished!  I think politicians should consider only posting about themselves and not their opponent, or at least don't have the same ads multiple times a day, day after day.  This is a garden blog, and I don't talk about politics here normally, but the ads, and some of the things I've seen on Facebook lately have bothered me.

I like what Obama said in his acceptance speech about us having the right to disagree and argue with each other, because in some countries they don't have that right.  Still, it is not useful or helpful to call someone names because they disagree with you.  The word that bothers me the most is, "hater".  It seems to me that someone who uses that word is being hateful. People, let's agree to disagree agreeably!

I really hope the politicians start working together for the good of the country.  We need to be more loyal to the country than our political party.  Let's forgive each other for having ideas or opinions we don't like.  Larry and I disagree about a multitude of things, but don't hold it against each other.  I've mentioned that there probably is not a person who thinks exactly like anyone else on all there is to have opinions about.

OK, I better quit.  Folks affected by Sandy, I am still thinking of you and praying for you.  I see on the news that some of you are getting snow now.  I am so sorry you are having to go through all of that!  I hope you are finding safe, warm places to be.
Posted by Corner Gardener Sue at Wednesday, November 07, 2012