Some Kind of Rabbitbrush

Larry and I went to Omaha the other day, and only had time to go to a couple nurseries.  I was pleased to find a nice sized pot of prairie dropseed grass that I fought hard to split into two to plant.  I also got a blooming purple prairie clover, which I promptly put a cage around so the rabbits couldn't feast on it.  There were a couple other other plants I bought that I wasn't as sure about.  My internet wasn't working, so I couldn't look one of them up.  The other, the young man thought was native, but he wasn't sure.

The tag on this plant said the common name is dwarf blue rabbitbrush.  The top part was broken, so not all of the letters of its scientific name were showing.  There were not very many hits when I did a search on it.  I found some information that led me to think this was chrysanthemum nauceosus.  I left a comment on a site about low water needs landscaping, where it was listed, asking if anyone knew the native range.  There was a link to this on Facebook, so two people I know, Gail, and Bertine, who is from Lincoln, gave me information that helped on my quest to figure out what this plant is. 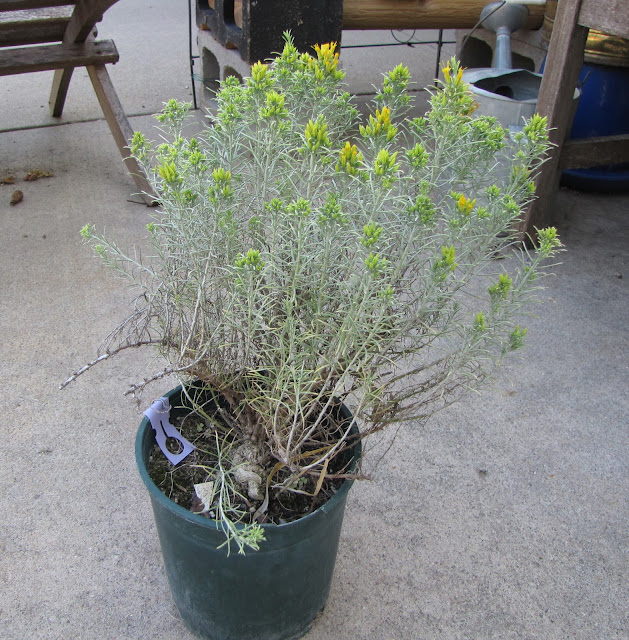 Gail gave me this link, asking me if I thought this was the plant I got.  Here, it was called Ericameria nauseosa, rubber rabbitbrush.  I couldn't tell from the photo, and was confused, because both names were different for it.  Looking at the tag again, I realized that there was the blue bird symbol, which told me it originally came from Bluebird Nursery, which is in Clarkson, Nebraska.  I called them, and explained about the tag, asking if they could tell me whether it is native to Nebraska.  I was impressed that the woman who answered the phone was able to get the information for me.  Guess what, Gail?  You were right!  It is Ericameria nauseosa, and I just noticed the site said it is known by different names in different areas, and can become "weedy or invasive". 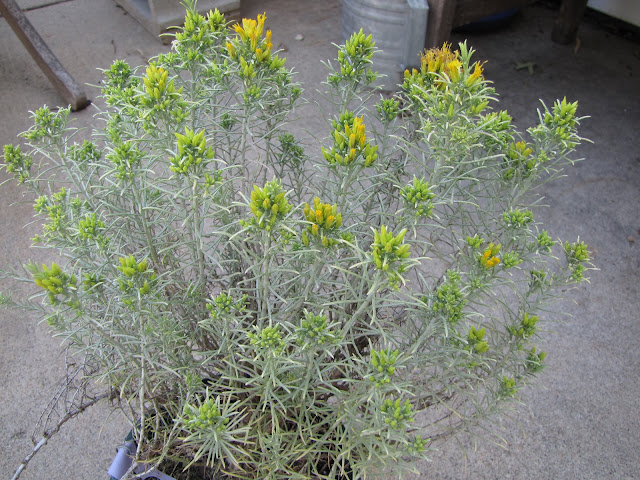 Bertine, this site says "nauseosa" refers to the smell given off when the leaves or flowers are crushed.  I didn't think to check that out, though. 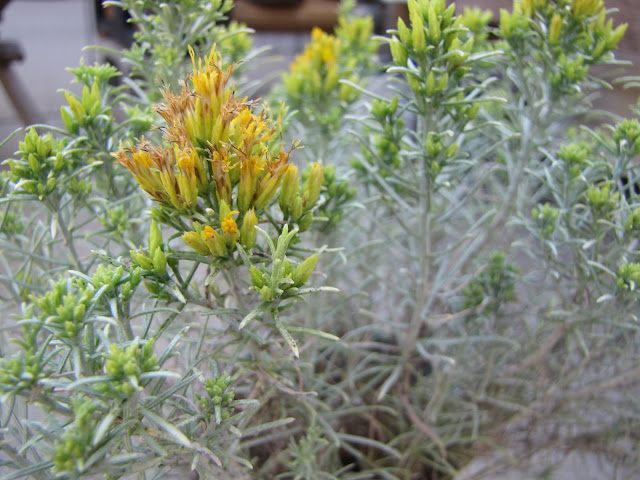 Isn't this a cute little plant?  This is the one the nice young man who I enjoyed visiting with about birds and butterflies thought was native. 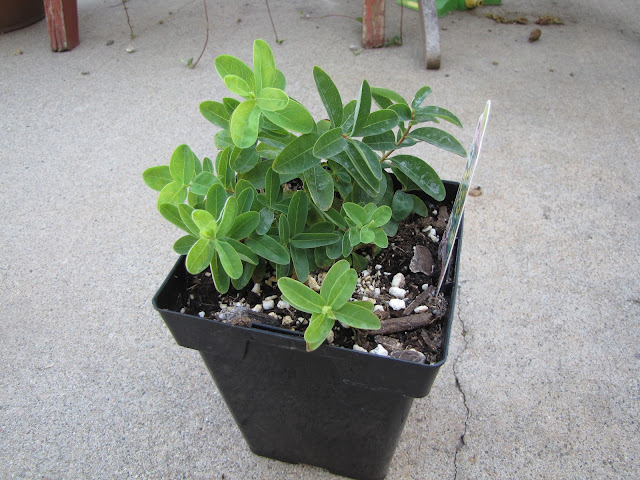 After going on some garden tours this spring, I was thinking I'd like to find a spot for St. John's Wort.  When I saw this, I knew it wasn't the bush I'd seen, but I was pleased to see the butterfly symbol on it, so I thought I'd take a chance.  I figured I'd find somewhere else for it besides the front yard if it wasn't. 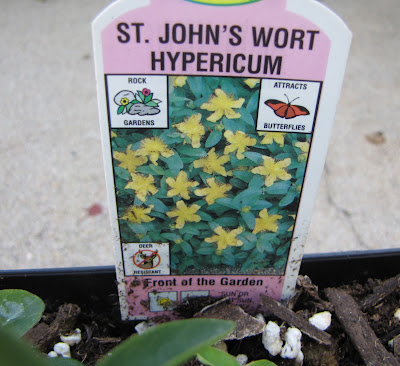 Today, I figured out where to put these two plants.  I have a small area in front of the vegetable garden that does not get as much water as the other beds. It normally looks better than it does now, due to the heat and lack of rain, but I thought I'd show the area a bit since I haven't in awhile.  I have had some holes that needed filling, so I'm glad I thought to put them there.  There are mostly white or yellow blooming flowers, and also plants with foliage with other colors besides plain green, and both of these fit into that category. 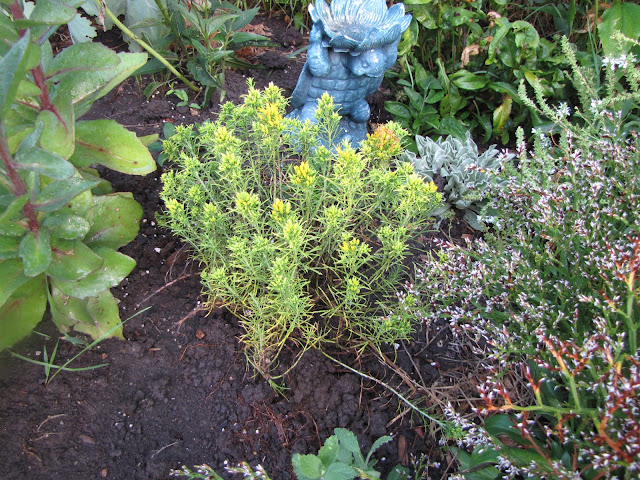 I need to deadhead the veronicas.  The bushy blooms in front of it are a perennial statice, or limonium, I'm forgetting the name of.  The boltonia is flopping over.  The rabbits have been eating the white blooming liatris in this bed. 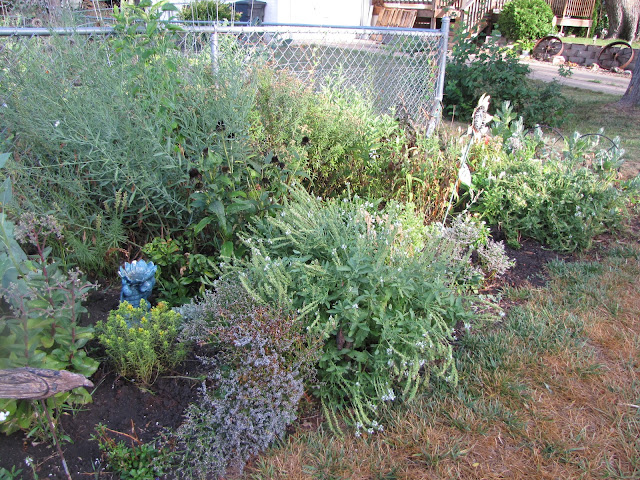 I put the St. John's Wort on the other end of the bed.  That's another statice.  I originally planted these to dry the flowers, but they look good so long on the plant, I tend to just leave them there.  The rue in this area didn't do as well this year.  I want to plant some more for the swallowtail caterpillars to eat. 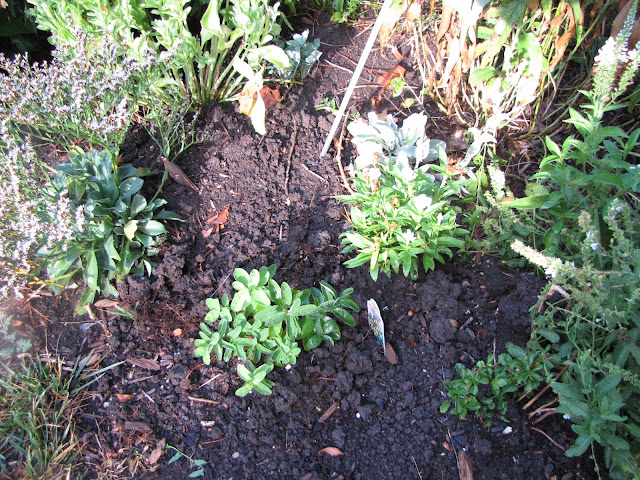 It's planted near the metal sunflower, which I recently got at a garage sale.  The very wilted plant is a phlox.  I should probably cut it back.  The reddish leaved plant is a Chocolate Joe Pye Weed.  Oh, and there are three large type sedums, similar to Autumn Joy that I moved from the curb area this spring.  They didn't seem to mind, and are doing quite well. 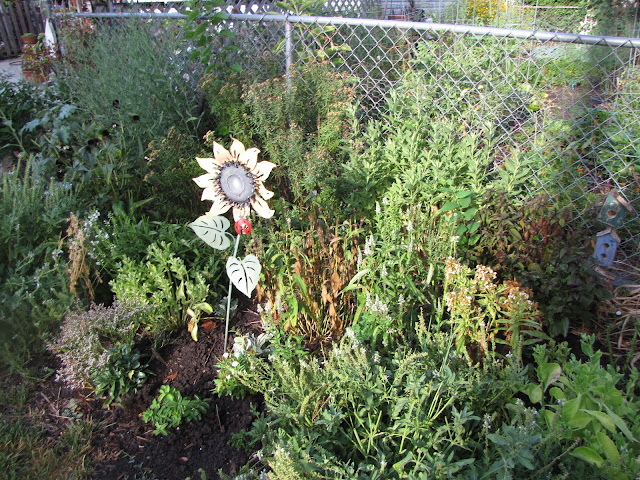 Have you ever been confused about names of plants?  I guess there is always something to learn when we garden.  I have pretty much run out of local places to find some of the native plants I don't have yet, and want to find a couple kinds of seeds.  Sometimes when I talk about finding plants that are native to Nebraska, Larry points out to me that I am not native.  Well, I guess he's right about that.  Also, if one is really wanting to be pure, I've read they should find plants and seeds that were actually grown from within a small range of where one has their garden.  I'm sure a number of the "native" plants I am growing do not naturally grow in the same areas as each other, either.  I have told myself I just need to enjoy what little yard space we have, and not be too obsessed with what I plant in it.  We have a nice assortment of plants that are beneficial to different kinds of butterflies, bees, wasps, birds and other critters, and there is no way I will ever have a real meadow or prairie.  I'm just glad our neighbors don't complain about it.

I go back to work a week from tomorrow. I worked summer school, and didn't get as much done as I wanted to this summer, but since it's so hot, and I don't feel like being out in this, I am ready to go back to that routine.  There was a chance I was going to work fewer hours, but my boss and I decided to keep my 7 hour day.  I do hope to have this part of the yard cleaned up by then, though.  The veronicas will most likely bloom again.

Have a great weekend!  It sounds like we are to go back to some highs in the 80s for a few days instead of the upper 90s and some 100s.
Posted by Corner Gardener Sue at Thursday, August 02, 2012