How I Deadhead Butterfly Bushes

I've mentioned in the past that once in awhile, I remember to look at my Statcounter, and one of the things I check on is what kind of searches people have done that led them to my blog.  Do you ever do that?  One of the most common ones is whether one can eat ornamental sweet potatoes.  Another is whether you can eat the stems and leaves of regular sweet potato plants.  I know you can, but don't know the details.  (Are the ornamental vines edible?)  If you have knowledge or experience cooking and eating them, please leave a comment and let us know.  I'd like to try them myself.  (I think I've seen finished dishes with them on FB or other blogs, but since I didn't try it then, I don't remember what I may have read.)

For some reason, maybe the words in the search, people have been coming to my blog trying to see if they can deadhead or cut back their butterfly bushes.  I took some photos of my second trim of the season so I could show how I do it.  I should mention that I am buying more and more plants that are native, and am avoiding plants that tend to spread farther than they should.  Butterfly bushes are considered invasive in some places, so this post is not an endorsement of growing them, and it may not even be the recommended way to take care of them, but it's how I do it.

I cut this back July 3rd because we have company on the Fourth, and there were a number of bees on the blooms close to where we walk back and forth between the front and back yards, and I wanted to insure the safety of both bees and humans. 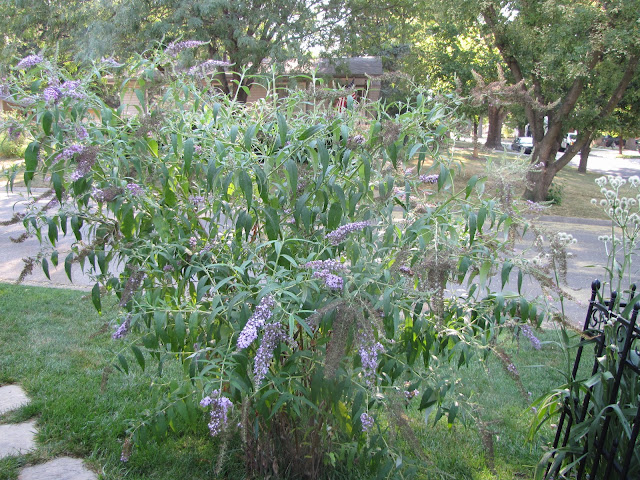 There were both spent and new blooms on the bush. 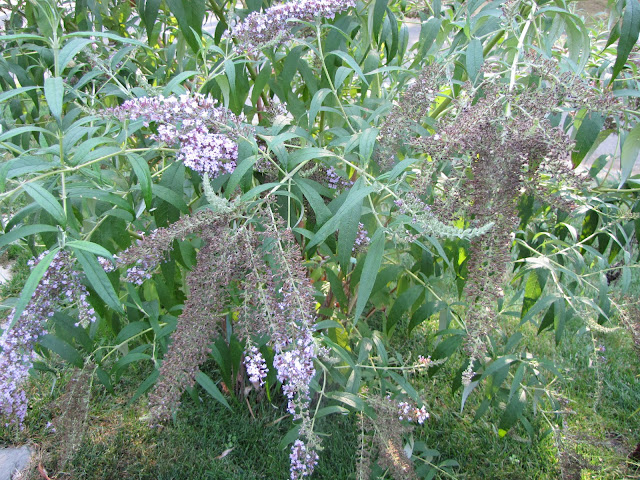 I cut at the place next to where the new blooms or buds were.  I cut close to the base, but left a little bit. 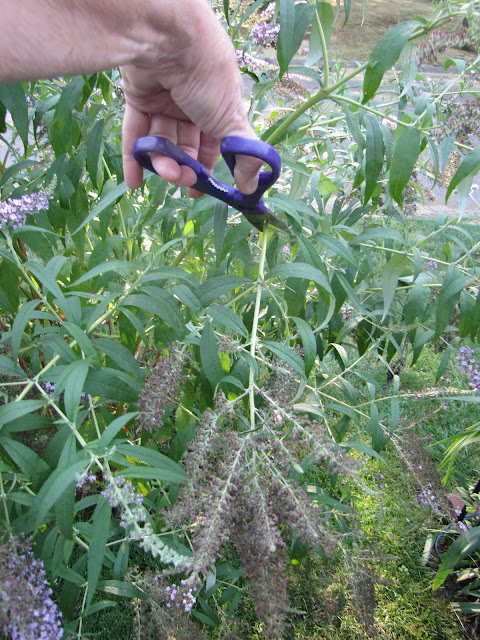 This isn't the same one I cut in the previous photo, but if you look at the top two blooms, you can see one of the cuts I made in between them.   I see there is a cut I made on the right side of the photo as well. 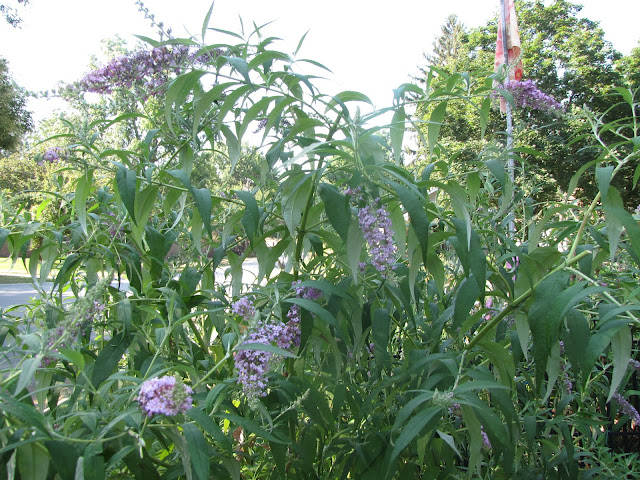 In some cases, I cut further back to make the bush a bit smaller.  Here are some buds that will be blooming soon. 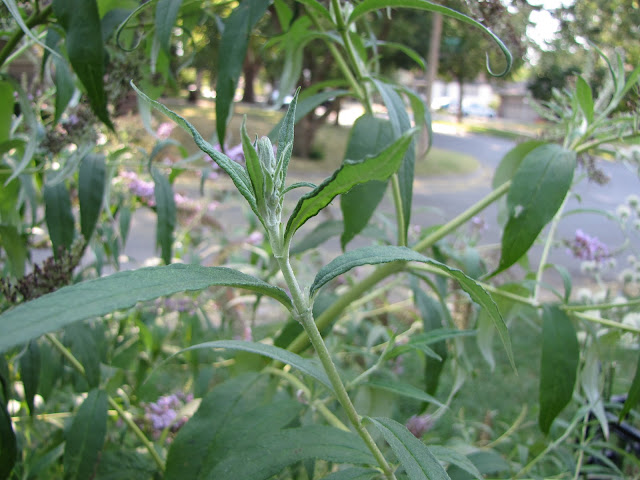 I cut finished flowers off at any time in the season, sometimes a few at a time, and other times, I cut off stems that are sprawling.  I also cut some of the stems on the top left that were sticking up taller than the rest of the plant.  Someone else could probably shape this up better, but I am satisfied for now. 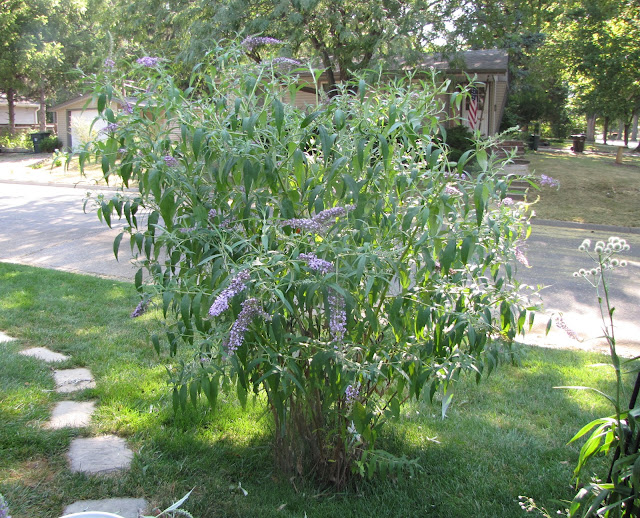 I pushed the stems down 3 times in this 5 gallon bucket.  These ended up on the compost pile.  I have never had this kind reseed. 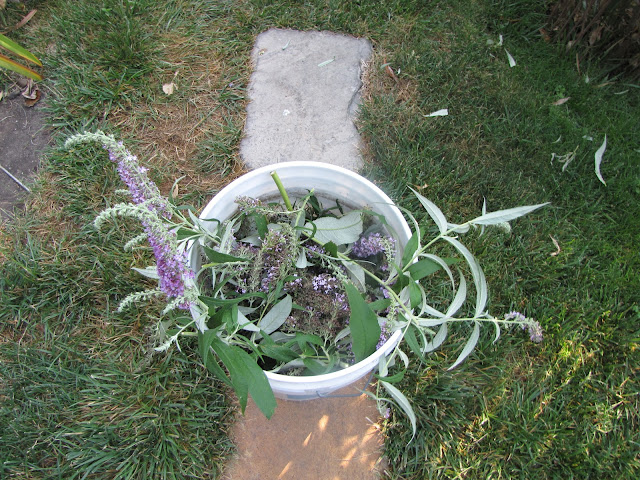 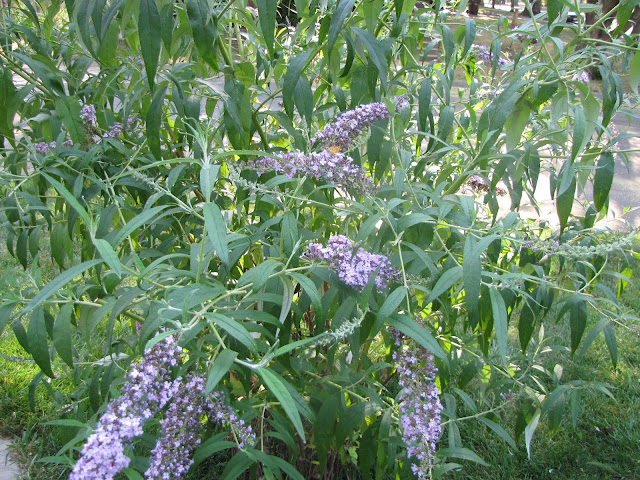 As I was about to put my things away, this skipper landed on a bloom.  I was pleased to see it. 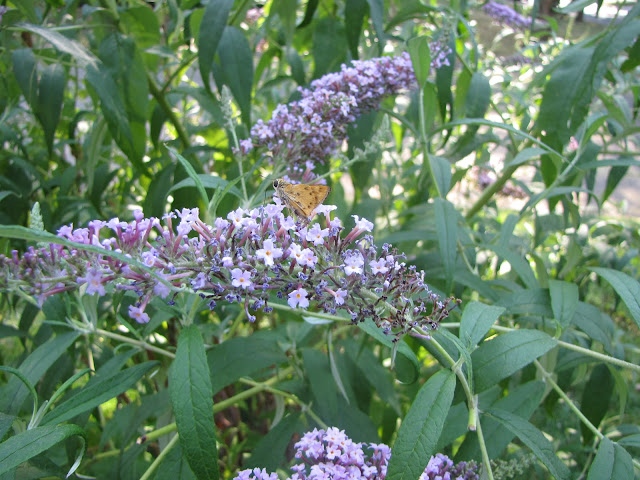 If you have another way you deadhead or trim your butterfly bushes, feel free to share.  I normally use pruners instead of garden scissors, but these were handy and clean.  I clean my pruners and garden scissors with rubbing alcohol.

Added a few minutes after publishing:

Well, I need to tell you something embarrassing.  I went back to see what other searches people have been doing when they ended up on my blog, because I forgot to do that before I published this.  I saw there was a link to the post where a person who did this search landed, and it was a September 2009 one, where I pretty much did the same post as this.  It's here, now, so I'll leave it.  I got a number of comments on that one, and most people said they do deadhead theirs.

Oh, and many of the other searches have to do with folks looking for ideas for gardening in corners, which is because of my blog title.  Some also have looked for ideas for planting around fire hydrants.  LOL  I think it's cool that searches of individual plants have led to some of my photos, and then, the blog.  We need to be careful with that, though, because sometimes I have been a little off, or a different plant was shown in the search than what was supposed to.  I've noticed that with searches I've done, as well.

What searches lead folks to your blogs?
Posted by Corner Gardener Sue at Monday, July 30, 2012