I've shown photos of my kitchen before when showing things I collect, harvest, or cook. Today, I am showing it because I have reached the point where I really want a change. A few years ago, we had some estimates to do some work, but were less sure of what we wanted than now. Also, we weren't wanting to spend the amount we are now in a position to, as the house is paid off, and interest rates for a home equity loan are low. I was trying to save money to pay cash, but it kept getting spent for other things.

Our daughter moving to a place where the dishwasher is built in, and there are plenty of electrical outlets around the ample counter space, and good lighting, has pushed me to the point where I am more than ready for a change. When our dishwasher is running, I can't warm my coffee, tea or bed buddy in the microwave, or a fuse will blow. I can't pop corn in my air popper, either. Actually, no food prep or anything else can be done when the dishwasher is hooked up to the sink, running. The dishwasher is now leaking water all over the floor almost every time it's run. The refrigerator has been "clunking" for some time, which is a sign it's on its way to breaking down.

I should mention that I'm grateful for the blessings God has given me, and have been following the coverage of the horrible earthquake in Haiti and its aftermath. I did donate some money today at church, and will again, as some fundraisers are planned. Also, I lead a team that serves meals at a local outreach center 4 times a year. (Other teams from my church do this other months, so our church serves once a month.) I mention this, because I am watching Larry King Live this evening, and it is wonderful all the money they are raising, but we also need to help the hungry in our own communities as we are able, to.

We had someone come out today from our local Three Day Kitchen and Bath. I thought they also did other work besides that, but he thought this would be best for us. Larry really dreads the thought of any part of the house being torn up. They have you leave your home for 3 to 4 days, then work all hours of the day to get the job done. He said unlike most contractors, who take on several jobs at a time, and work wherever the people are yelling the loudest, they only take on one job a week. They are booked up until March, so there must be people who like what they do. I tried to find some reviews of their work not promoted by them, but couldn't.

I am doing this post to see if anyone reading this has experience with Three Day Kitchen and Bath. It looks to me that the cupboards will be pretty standard, but they seem to be OK. I told him I am a gardener and a slob. I want materials that are easy to clean and maintain. He asked us some questions, showed us some kitchens they've done, and the price range for different choices of materials. He said they can work with the budget we have. Next week, he will bring a van with materials and get more specific with what we can do. He will also bring a plan from the things we told him.

We know people who have worked with designers, and the work took several months, with some setbacks and problems. They have been happy with the outcome, but it was difficult while it was going on. We are not handy, so are not wanting to try to help to save costs.

Let's take a walk around the small kitchen. We'll probably keep our stove, since it's only a few years old. I don't like the cooktop, but love the convection oven. We mentioned getting a gas cooktop with an electric oven, but don't know how expensive that is. 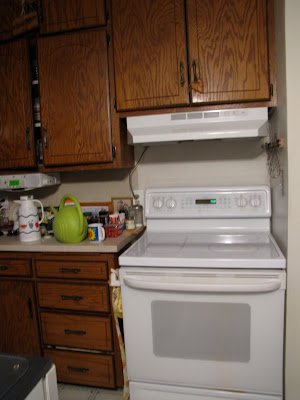 The guys didn't hear me when I asked about whether we should get different windows. We'll have to check into that. 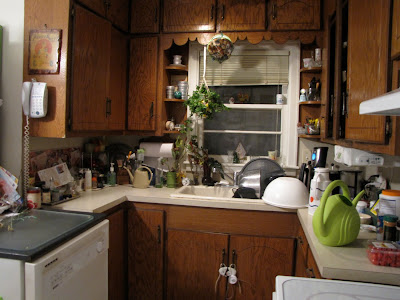 I've mentioned before that I'm not a decorator or landscaper, but I love to fill spaces with things I like. Sometimes, it reaches the point of clutter. 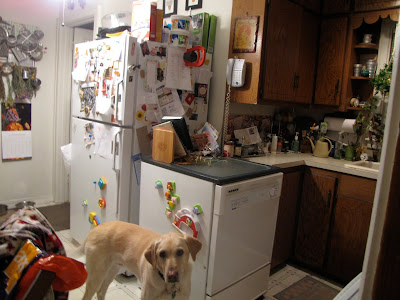 We don't normally have a bag of dog food in the kitchen, but I guess Larry didn't make it to the basement with it after he bought it today. 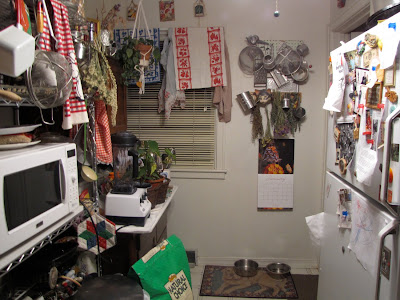 I am sad that we will probably have to get the hoosier out of the kitchen. I'm not sure if we can find another spot for it. Maybe it will fit in our daughter's kitchen. There are scratches on it from Heidi trying to get it open to see what she could eat. I won the Vitamix on the radio by answering some questions on nutrition. They were interviewing a guy sponsored by the company, walking or biking across the country, and I was the right caller. 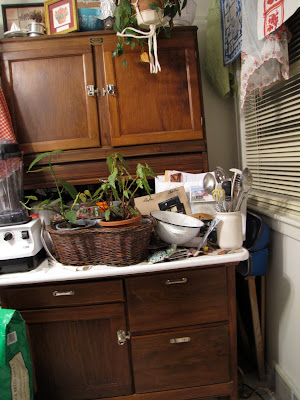 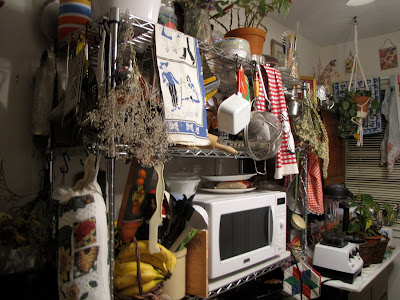 I bet Ashley will be glad to replace her card table with this gateleg one, that is if I don't find another spot for it. 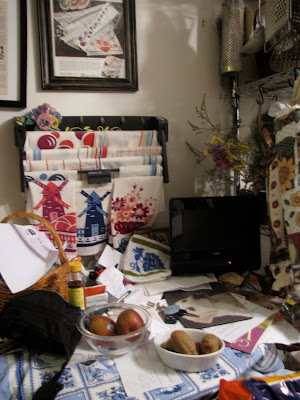 We are not going to end up with a high end kitchen, which is fine with me. I just want a sturdy and functional one where I can cook and do the things I like to do there when I want to do them. My in-laws raised 5 kids in this house, and we used to bring our kids over to eat meals, and we all ate in the kitchen. I don't know how we did it, but it was tight. They did have a plan drawn up to remodel the kitchen, but we didn't find it when we were cleaning up to get moved in. We turned a bedroom into a dining room, but we would like to be able for the two of us to eat in the kitchen.

If you have any suggestions as to materials, contractors, or just want to tell about experiences you have had with remodeling, let me know. I asked about recycled glass countertops, but he said those are the most expensive right now. Well, Larry King is over, and I'm still typing! I better end this before it gets any longer!