I normally stick pretty close to gardening on my blog.  Actually, if you think about it, the kitchen is an extension of the garden.  It's where we bring the food we grow, prepare it, cook it, and if there's room, eat it.  We may even have some plants growing in it.  I just know I am excited for my kitchen to become more functional.  These pictures were emailed to me today, but the ones he first showed us I don't have yet.  Here's a link to the post with my before photos if you didn't see it.

This is the view of the U area.  It's hard to see what all is there, but I am losing the cupboards above the sink.  The planner/contractor is working well with us, and making changes as requested.  He is going to put a shelf across the window.  On the left of the sink there is a nice corner cupboard at an angle. 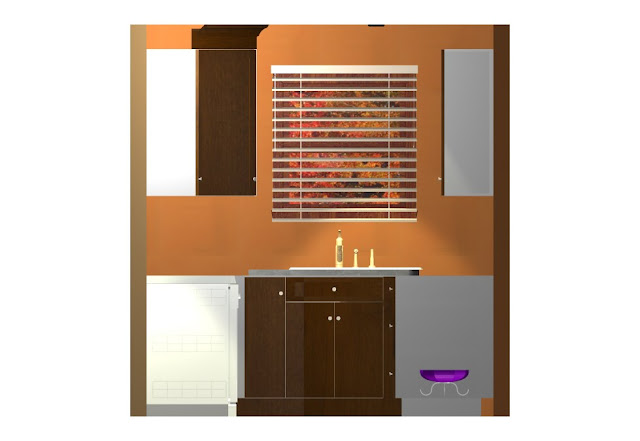 The second photo shows the 6 foot cupboard that is going to be a few inches from the south wall where the hoosier is currently.  I asked to see what the upper cupboard would look like, and asked if he would be willing to put different kind of shelving, such as track ones.  I found some examples of open shelving to email him last night, and haven't heard back about that.  He did say he'd be willing to do the track shelving, and it would save some money.  That's not my main reason, though.  I think I like the look of open shelving better for the area.  He was originally going to have the table be by the window, and the shelf closer to the door to the kitchen from the rest of the house.  We thought there would be more room for the table on the other end, because it could be closer to the inside door than the counter could be.   I am excited about using this area for popping corn, and using other appliances, such as the popcorn popper, toaster, and slow cookers.  I can store them in the cupboard underneath. 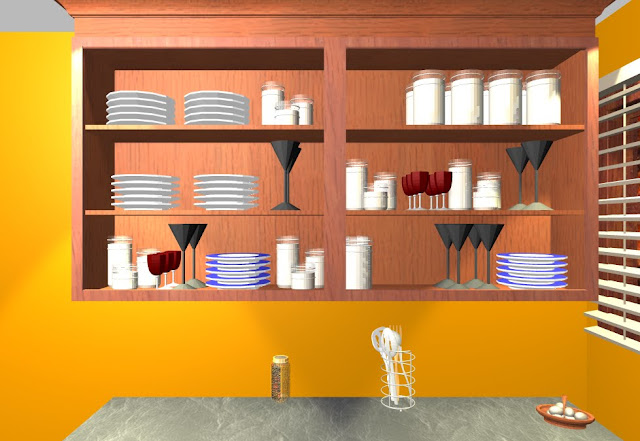 The next is a view from above.  The back door is on the upper right.  The new side by side refrigerator will be in the same place the current one is.  There will be a cupboard above it, with another next to it where the current dishwasher is.  The new built in dishwasher will be in about the same spot.  The new gas stove will be moved closer to the sink, so there can be a counter on each side of it.  A built in microwave/fan will be above the stove.  The cupboards will go to the top, and not have separate doors for the above ones like we have now.  The gateleg table will remain under where the photo shows a plate rack.  There will be room for a chair on the other side or against where the cupboard will be.

I will be glad when I can have room to do things in the kitchen when the dishwasher is running, and won't blow fuses.

They are also going to take the carpet off the stairs to the basement and remove the paneling.  I don't remember if they are putting something up or what. 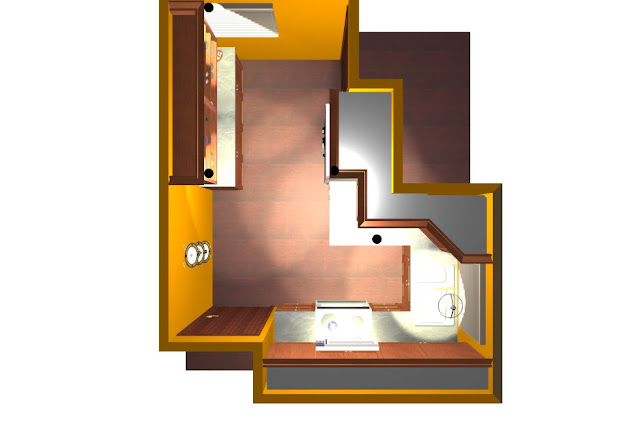 Several others have shown photos of their kitchens.  I hope more will be inspired to do so.  I should send you to see FlowerLady's.  When I showed Larry her photos, he asked me if I was sure I wanted to have cupboards along the south wall.  He pointed to my current shelves and said that was me, and that FlowerLady's kitchen was me.  I told him someone pointed out that I will make the kitchen homey.  I am glad he is supporting me in having open shelving instead of another cupboard on the south (to the left in the above photo) wall.

I am now up past my bedtime, and can't remember who else has posted theirs.  If you have a post about your kitchen, feel free to leave a link to it in a comment here.