The season flew by too quickly, and here we have arrived at September's Wildflower Wednesday, hosted by Gail, at Clay and Limestone.  My previous post was on the different kinds of goldenrod that I grow, so I won't be including them right now.  They are still the stars of the show, but others have joined them.  We have had a good amount of rain this year, so most of the plants are doing quite well.  Some of the goldenrods have white on the leaves from a disease of some kind, I'm thinking from more moisture or humidity than is best for them.  I looked up powdery mildew, and the images I saw were worse than what mine look like.

I trimmed back the asters this year, especially the New England ones, because they get so leggy and get a disease on the lower stems.  They still have that, but they are loaded with buds, a few of which have opened, and been found by pollinators.  This is a sweat bee of some kind. 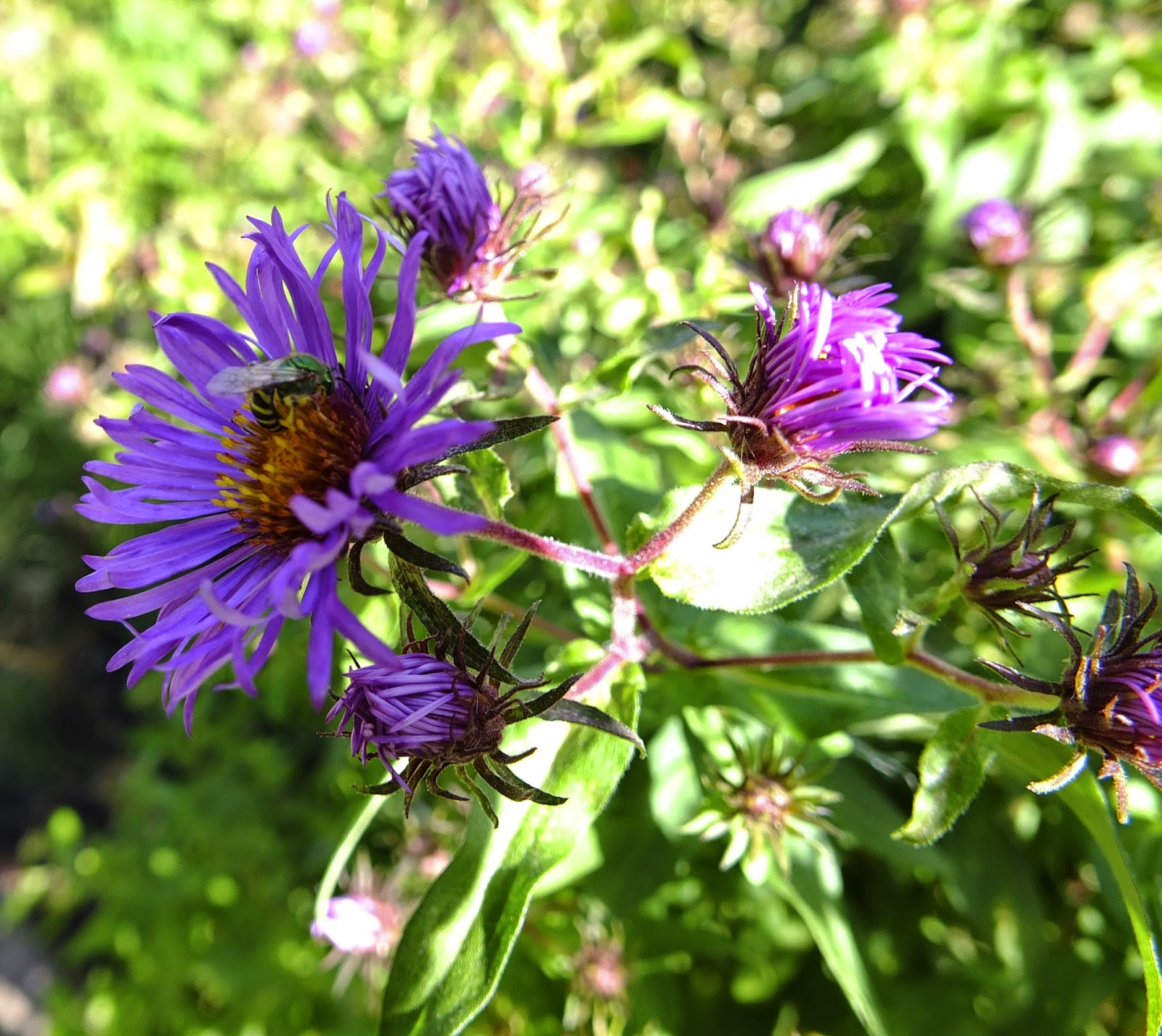 The brown eyed susans have been blooming a week or two, and are still looking pretty good. 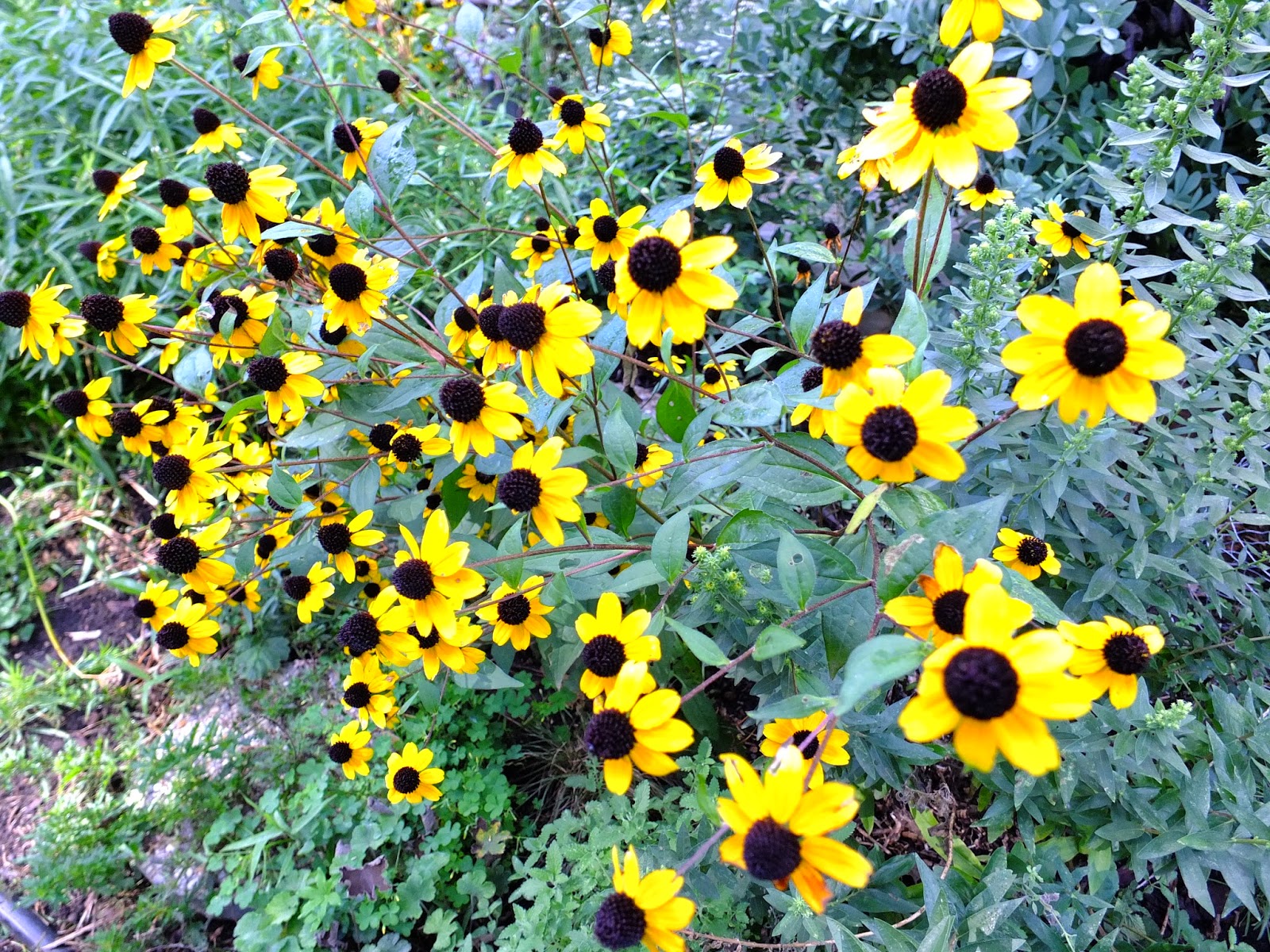 This Clematis pitherii is on a second flush of blooms, and a bumble bee is taking full advantage of it! 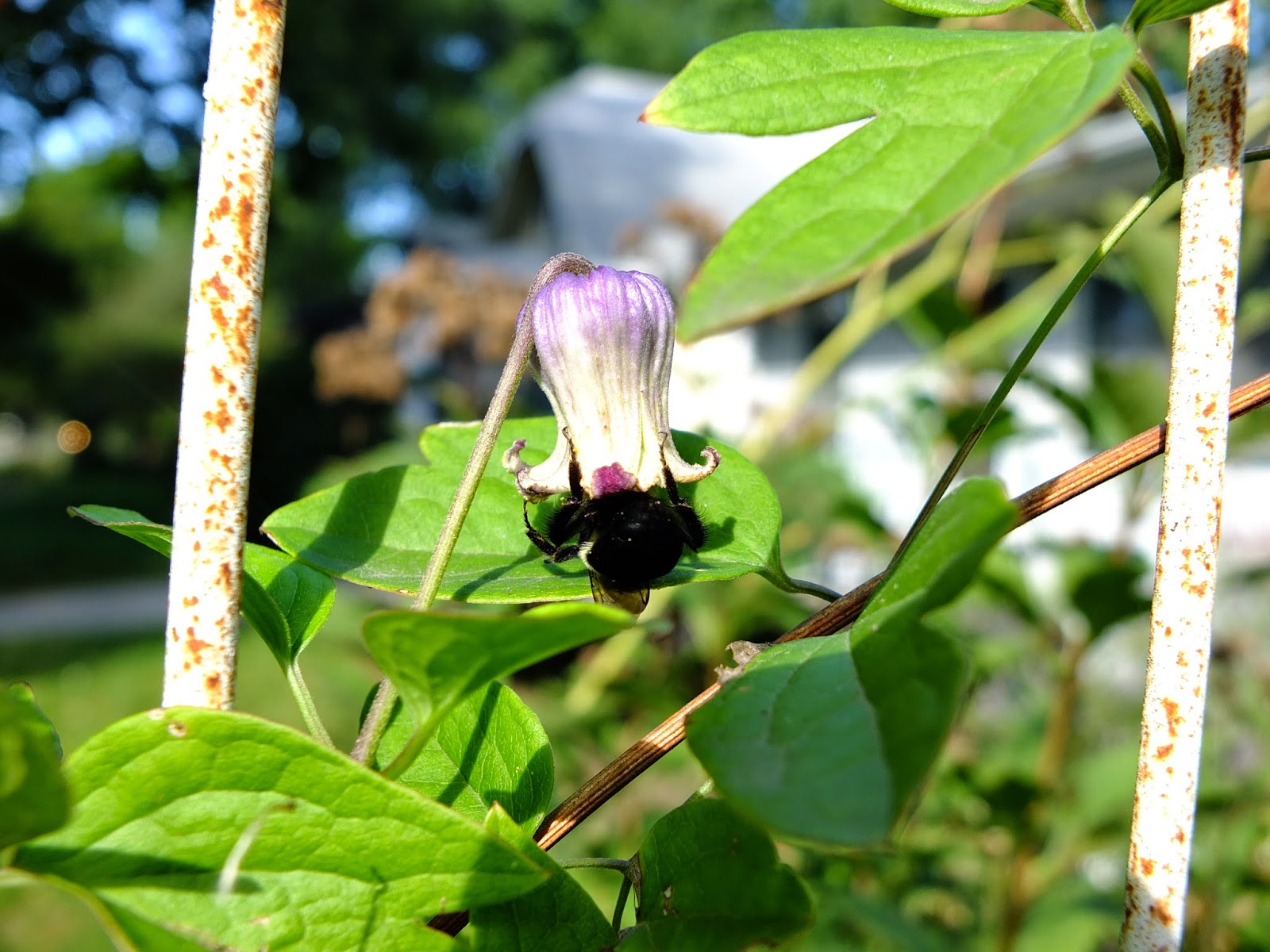 I normally cut the beautyberry bushes back early summer so they won't sprawl, but did not get to it this year.  They are doing OK, though. 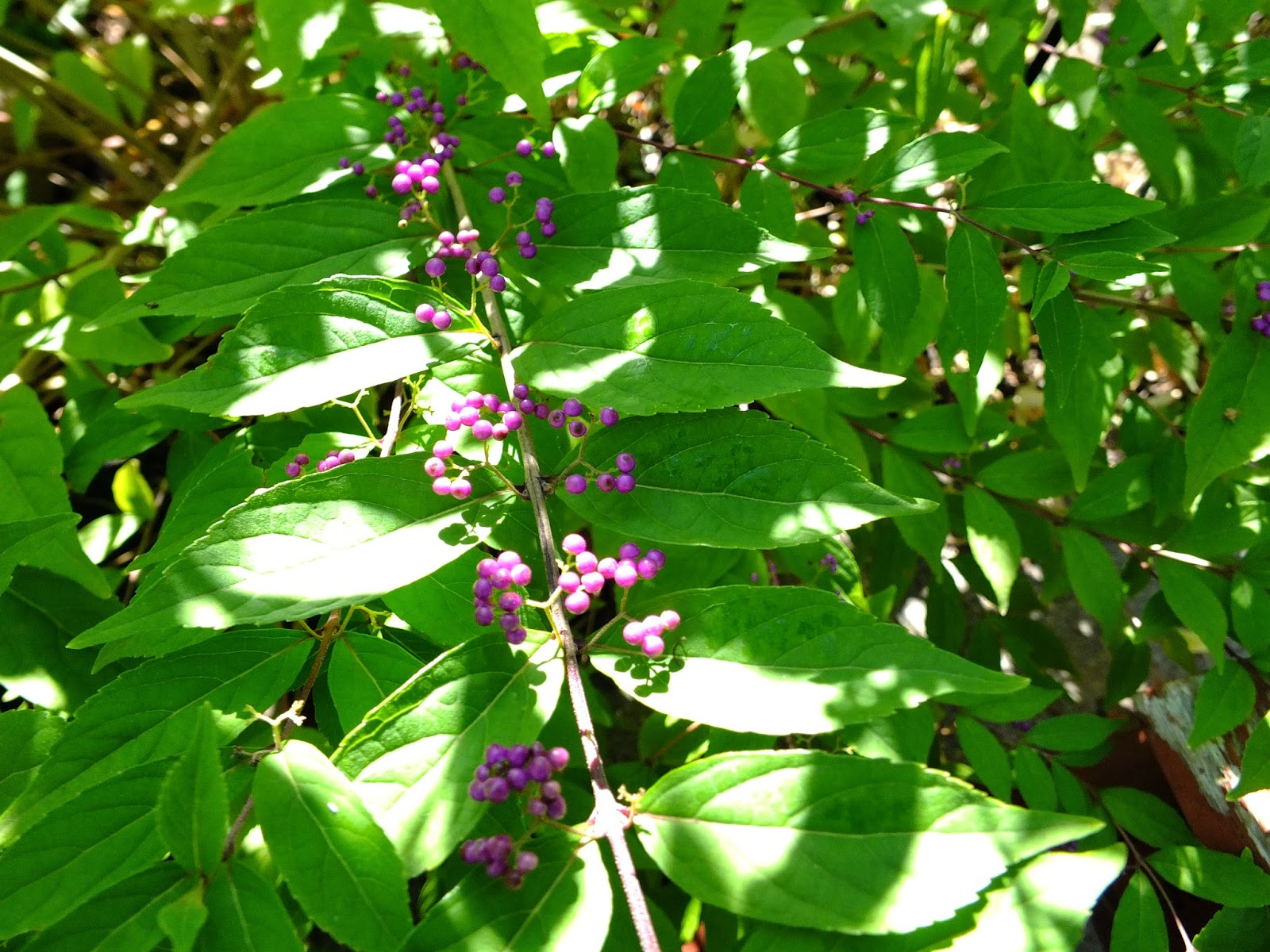 The common milkweeds have been getting a disease the last few years.  The pods have black on them.  A friend of mine said that if the seeds look OK, they probably were protected inside the pods.  In my searching to learn about diseases they can have, I read that one should cut some of the plants back about half so there will be new growth for the caterpillars.  Do you do that? 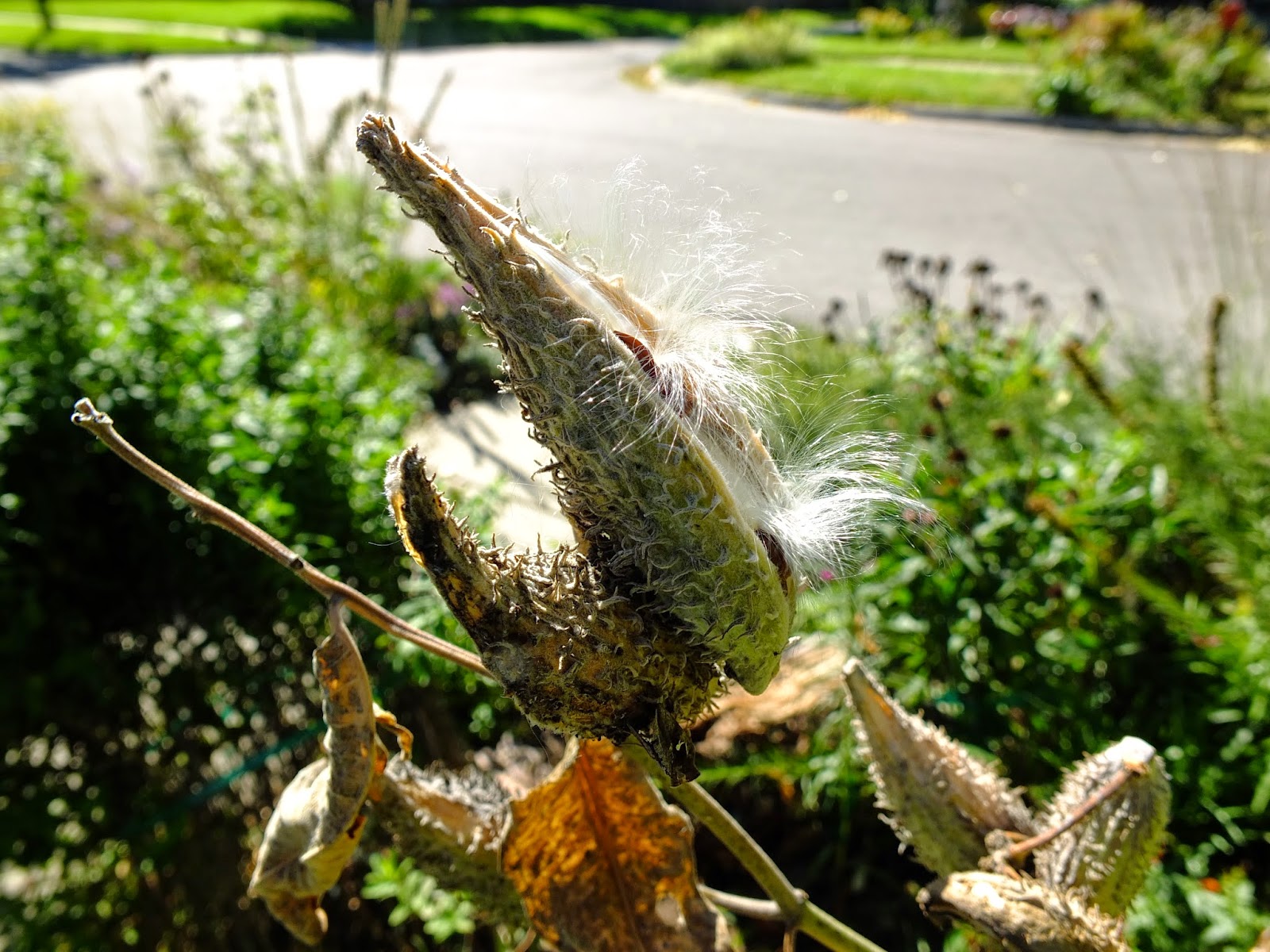 Illinois bundleflowers are pretty even after they bloom.  The seed pods turn a beautiful dark brown, and the foliage looks good. 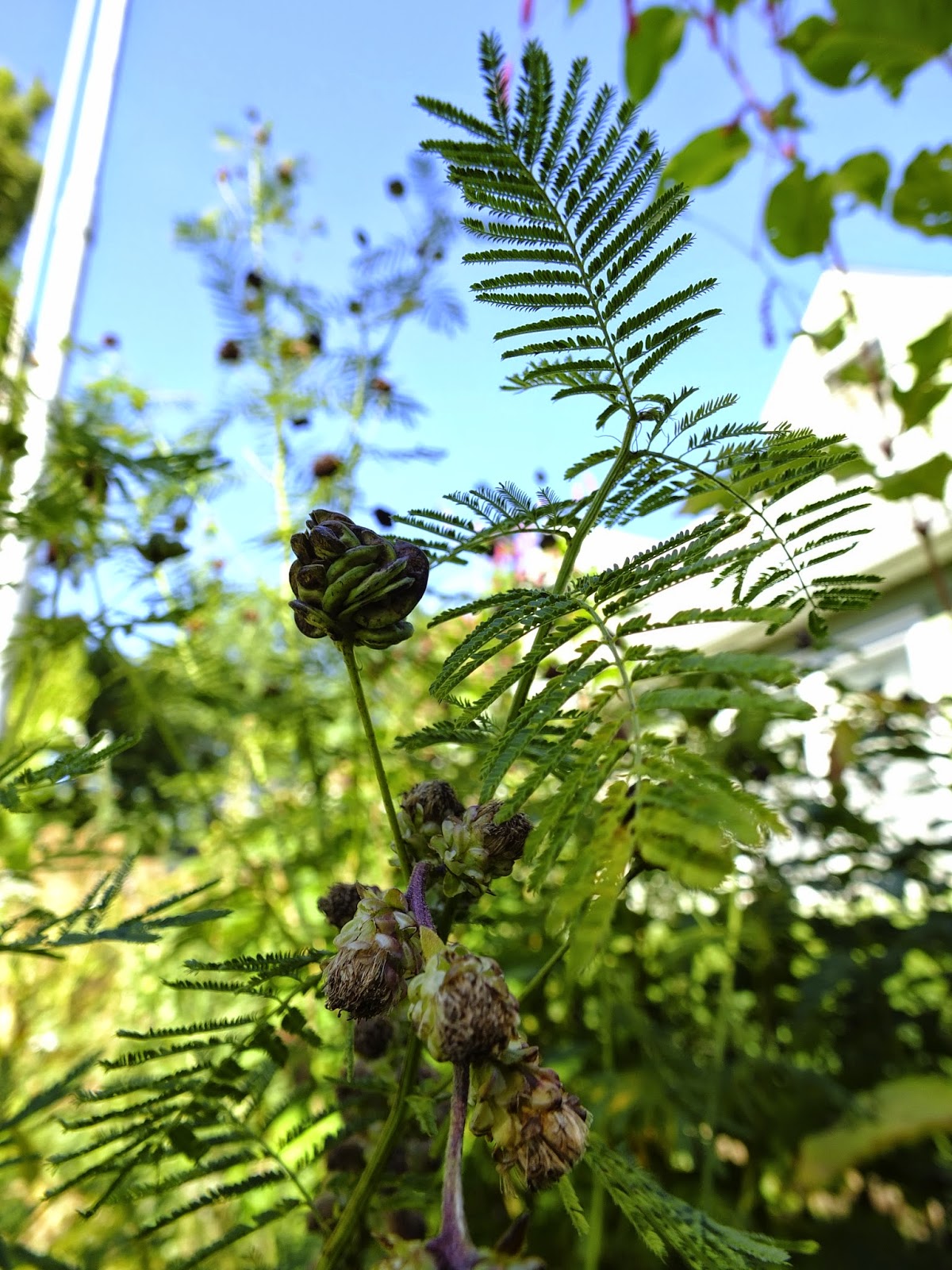 I am pleased to have locally native pitcher sage in different spots in the yard.  The pollinators seem to be as well. 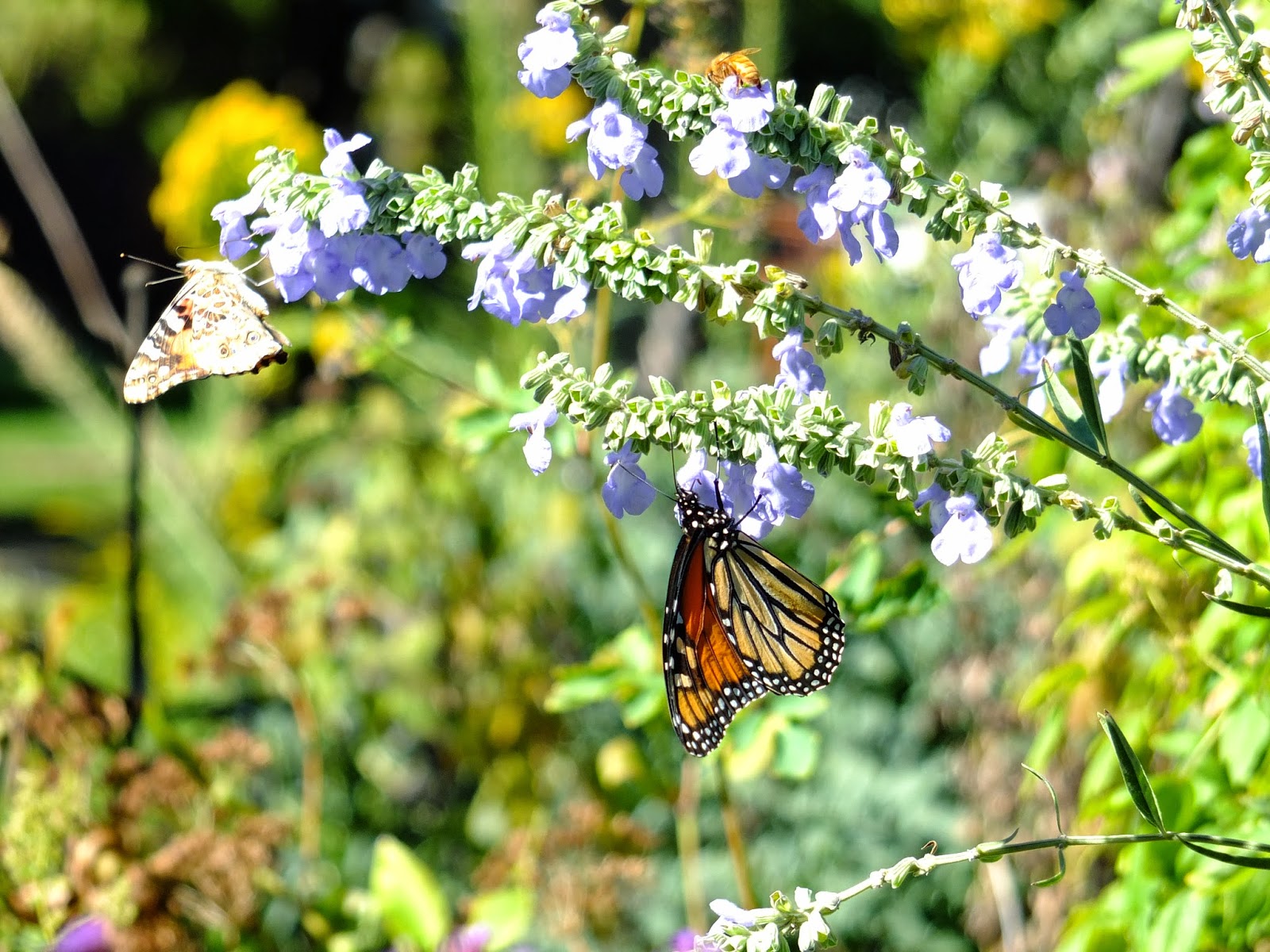 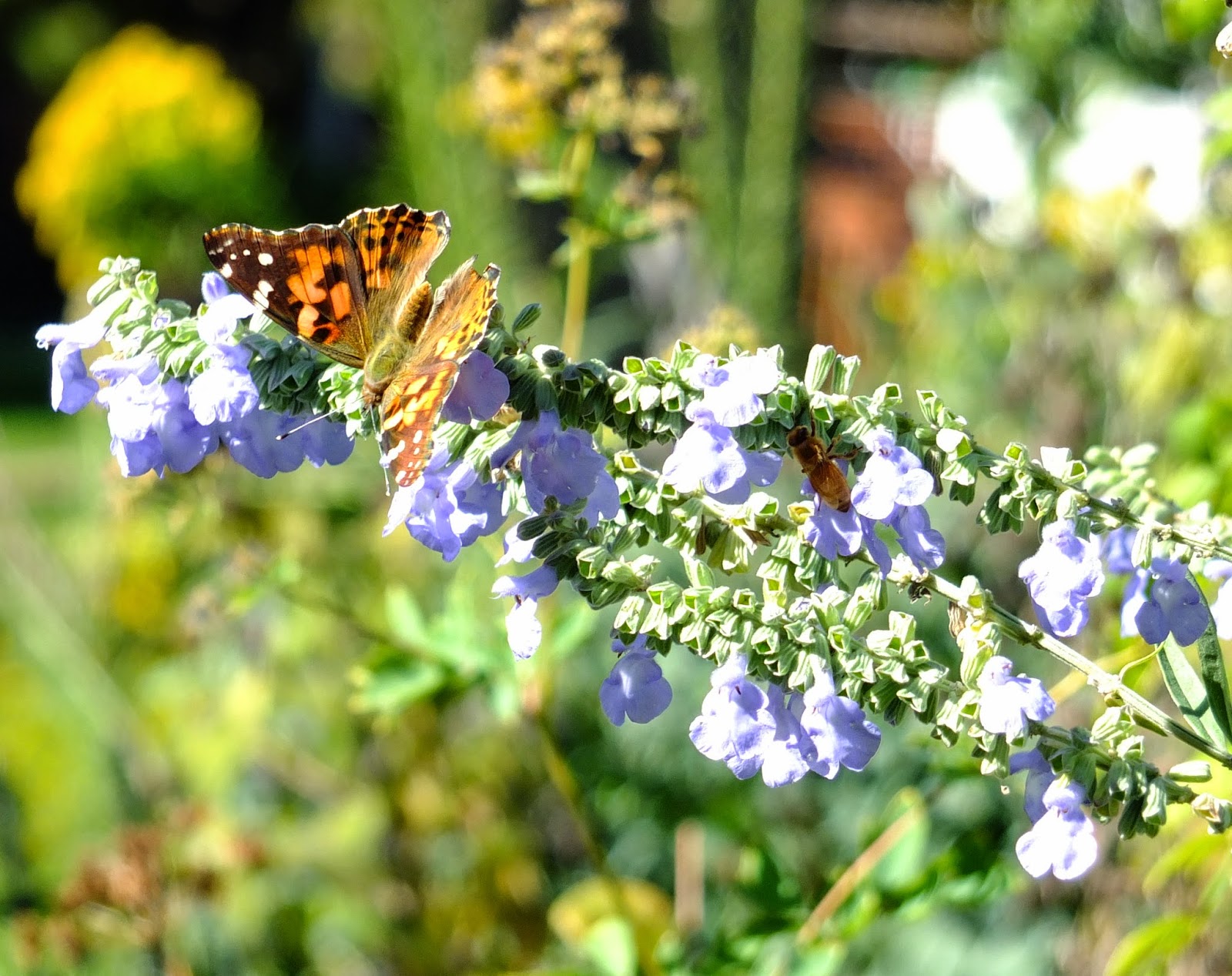 Sometimes the blooms of a Pitcher sage will be white.  There is one clump of the white this year. 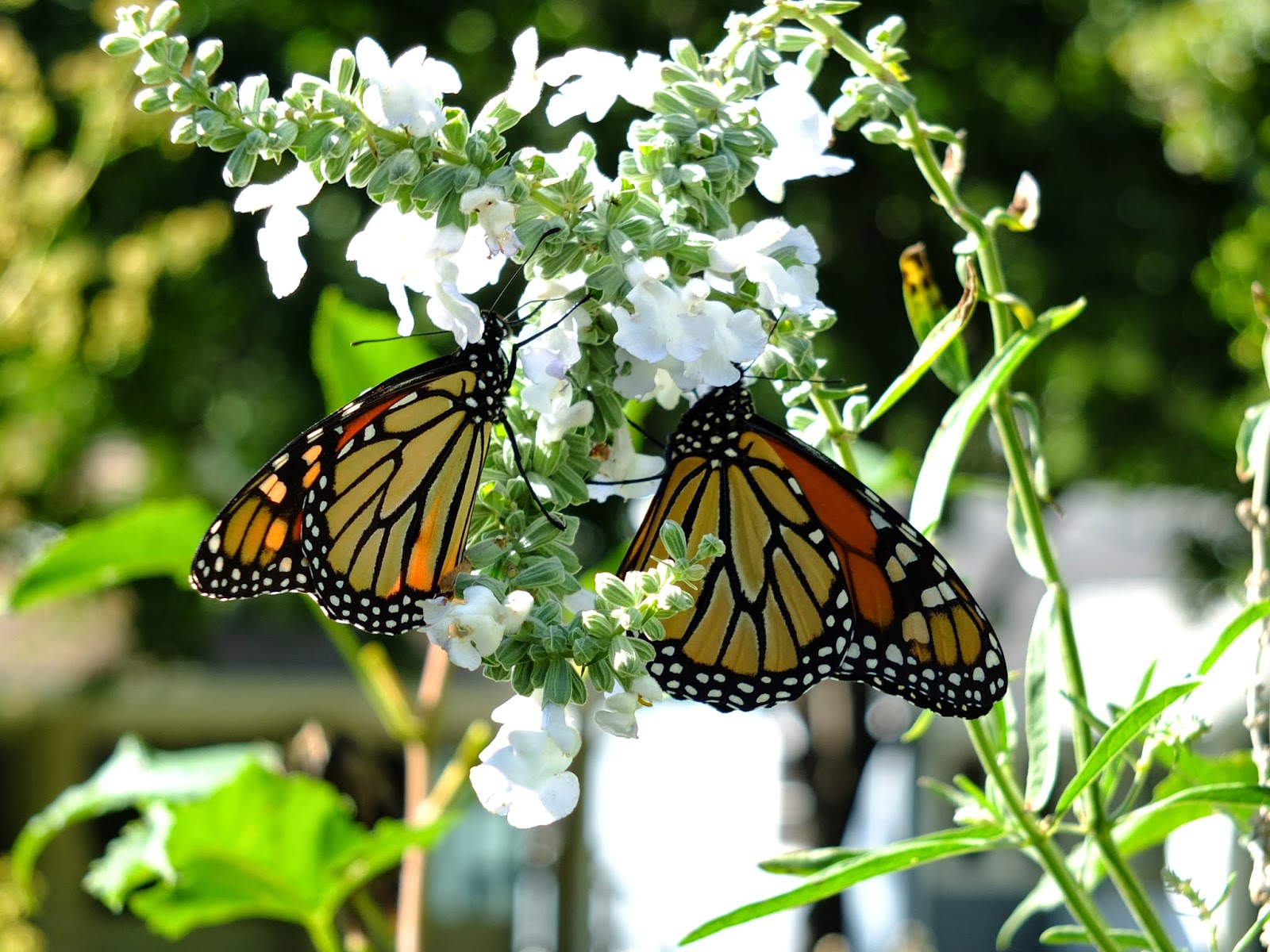 I am not sure what kind of ex-aster this is.  I wonder if it is a heath aster. 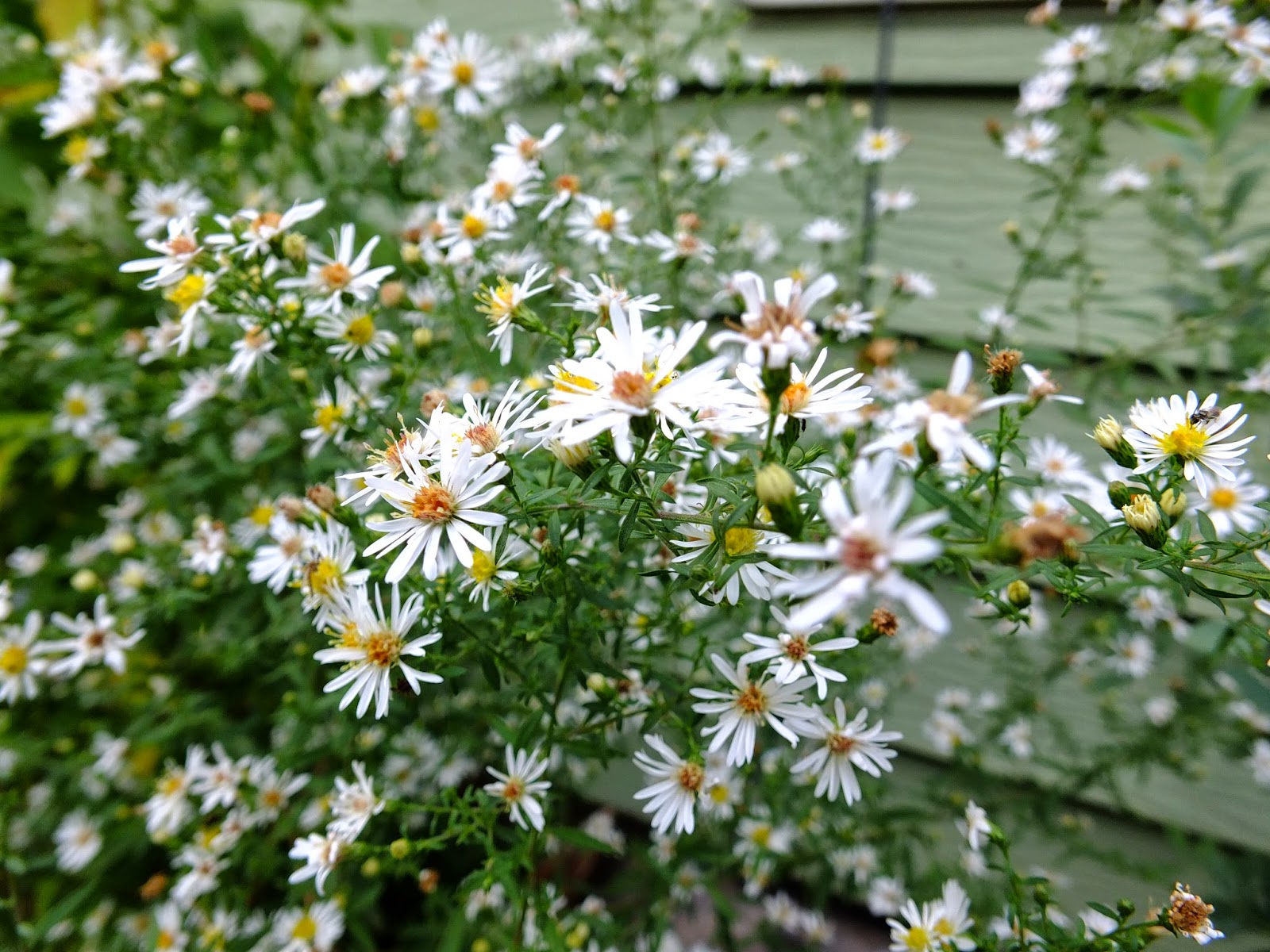 I took this another day when there was a tiny bee on it.  I do not know what kind of bee it is.  Do you? 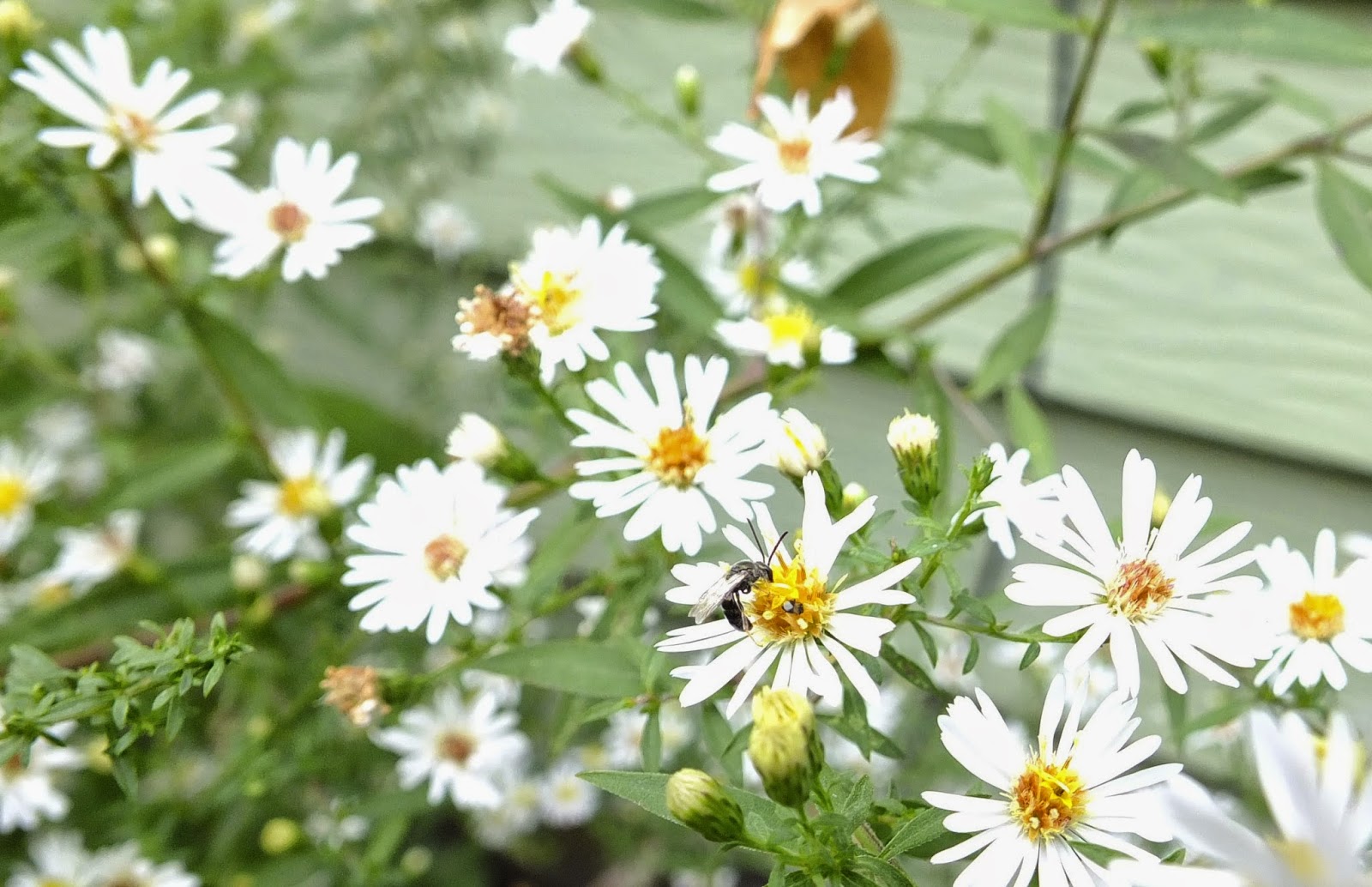 With the days getting shorter, I guess I am accepting that it is fall.  I hope to let myself enjoy it.  Usually I am struggling because I do not like winter.  If spring weather would arrive here in March instead of April or May, I would not mind winter as much.  I hope you are having a good fall, with plenty of wildflowers to enjoy.
Posted by Corner Gardener Sue at Tuesday, September 23, 2014