A Busy Week Ahead (not garden related)

I will not be visiting blogs as much as usual this week. Our daughter got the keys to a different apartment today, because the utilities at the place she moved into a year ago are too high. She and I looked at a bunch of places a week ago, and this one was the largest and nicest for the amount of rent. They are giving her the rest of December free, but she will still have to pay the rent for where she is living now, so we are helping her with the current rent for her February birthday gift. I will be helping her pack and move this week. I also hope to get rid of some clutter around home.
We took a bunch of photos and she was very careful about writing things down on the inspection form she has to turn in in order to get her deposit back when she moves. The place she lived in previous to the one she is moving out of was sold, and when she moved out the new owner was not going to give any of it back, until she found a phone number for him, which turned out to be his mother. After several calls to her, one from Larry, he finally gave her less than a fourth of what the deposit was, even though we left it cleaner and in better repair than when she moved in.
Even though I will be busy, I am not committing myself to a blogging break. I don't know if I can do that. If I don't make all the rounds, I'll tell you now, have a happy and safe New Year celebration. Larry and I usually stay home and watch a movie. We still have root beer floats like we did when the kids were growing up. When Ashley was in the 6th grade, she spent the night with a friend. At one point, she asked her when they were going to have floats. She thought everyone did that. Trevor said he hadn't realized it was our own family tradition until then, either.
So, here is Ashley, thinking about what she is going to put where: 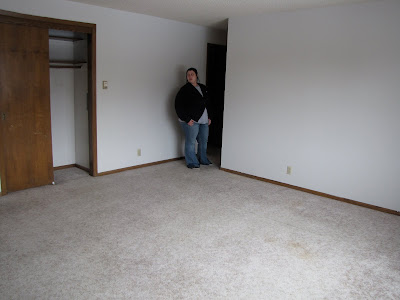 Larry wasn't aware that I took his photo. Ashley and I asked him to buy some shelf paper and put it in. I didn't know if he'd be willing to, but it was a great help to us that he did. There were stains and such that didn't come up when we cleaned. We love the kitchen, though. It's big enough to eat in, has a dishwasher, plenty of electric outlets, and lots of cupboards and counter space. We had fun testing things out. They must have an instant hot water tank, because the water comes out hot as soon as the faucet is put to that side. The refrigerator looks like it's new. The stove isn't, though. We forgot to see if the burners and oven work. We'll have to do that before she turns the paper in. 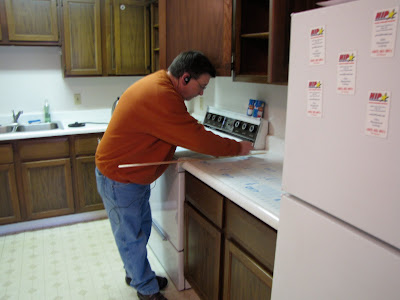